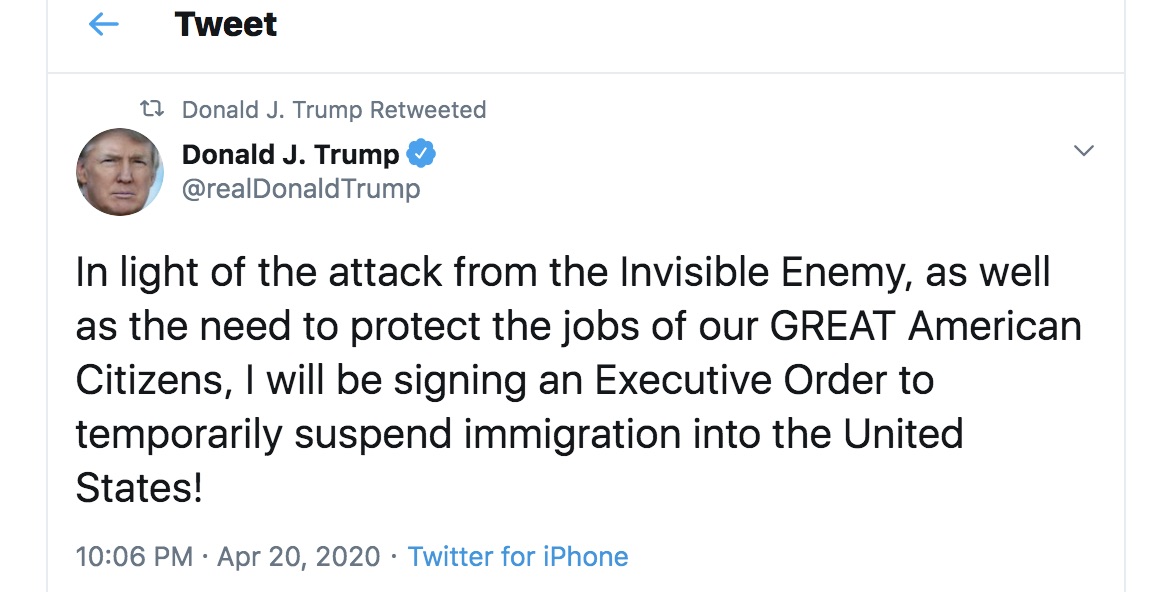 So, just like that, in a tweet sent late on Monday evening, Donald Trump decided to shoot down the American dream in order to kill the very idea of ​​America. Worse, he didn’t even deign to announce this attempted murder during the daily press conference at the White House–which now should rather be called an electoral rally that he holds–insulting those journalists who dare to ask him the real questions instead of kowtowing to the president and accepting that he is always right because he “does everything right”. No, for his latest crime, Trump once again has pressed the twitter trigger, so as not to be the target of the “fake” questions (actually, the questions are true, it’s the answers that are false!) from journalists. Trump fires the weapon of mass communication which reaches that very electorate that is receptive to his most effective propaganda.

Trump didn’t need the coronavirus to start dreaming about killing the American dream. He already did so as soon as he entered the White House, with his anti-immigration decrees, targeting Muslims and effectively portraying them all as suspected terrorists. Then, last January, he got the chance to block flights from China, thanks to the coronavirus. In March came the closure of the US borders to flights with EU citizens; even if he still could not pull it off with Green Card holders (who have legal residence in the US with work permits) because surely the companies where these European citizens worked would turn against him. Finally, Trump could not wait to close the borders with Canada and Mexico, a perfectly successful move to prepare, now, the most important announcement delivered, as always, via twitter: no more immigrants. Zero. Even the legal ones will remain outside of the US. Finally, the wall goes up for all foreigners!

For his election campaign, which is the only thing that really interests Trump right now, the worst president in American history pushes down on the accelerator of election propaganda: xenophobia. The fear and hatred of the foreigner is a very contagious virus among those social groups who have lost, or are afraid of losing their jobs and it has been a great success already. It does not matter that in reality this group is not endangered by immigrants, but has been made obsolete by that global economy from which Trump himself has greatly profited, with his tacky hotels and ugly made-in-China ties.

Armed with twitter, Trump announces that he has to “protect jobs”, thus going back to the rhetoric of “Make America Great Again”. However, the record loss of jobs in recent weeks, which has now reached numbers that recall the Great Depression of 1929, has nothing to do with illegal or legal immigration: it was caused by the lockdown necessary to stop a pandemic that Trump has been guilty of delaying to understand, a delay that has come with grave consequences.

Trump is now in the middle of his election campaign, and frightened by the consequences that his negligent preparation for the coronavirus has caused to his approval ratings. He’s also panicked that Joe Biden is already 6-7 points away, and he has suddenly changed his electoral slogan, going from building the “wall” to keep poor illegal immigrants out, to chasing out even the legal immigrants. To the “American” from whom Trump seeks a vote, he sends the message that not only will he get back his job, but he will no longer be contaminated by the proximity of the “invisible enemy”: the foreigner.

What an unrecognizable America it is that the worst president in its history is shaping in his image and likeness! But it’s still not too late. The millions of voters who detest him precisely because they have always perceived Trump as the enemy-in-chief of the core American values, can still boot him out in November. But if the “Trump haters” fail by not rallying solidly around Joe Biden, then the US, rewarding him with a second term, will mirror itself in Trump and, with the resurrection of “nativism,” will become a closed, selfish, crude, racist, xenophobic, and ignorant nation.

With every twitter Trump has further eroded the previously admired and emulated ideals that had made the United States the most desired destination for the emigrant seeking redemption. In November, we will not only choose a president. If Trump should win, that ideal of America that has captured the imagination of generations of people will die with his victory. Trump is the killer of the American dream and his triumph would be the death knell of the idea of ​​America.