Are You a Chianti Lover?

On April 27th, I went to a wine event in Manhattan at The High Line Hotel. The theme was “Chianti Lovers”. It was not only a celebration of Chianti and those who loved it; it was also an examination of the current reputation of Chianti in the US.

The most interesting part of the event was a seminar for the trade that was called The Media’s Point of View of Chianti. Giovanni Busi, President of Consorzio Vino Chianti, was there to present the viewpoint of the Consorzio (a group consisting of the membership of producers and/ or wine-growers that help to set regulations, fund projects and promote the region as a whole). Ray Isle, Executive Wine Editor “Food & Wine Magazine”, was there to talk about feedback that he receives from wine drinkers about Chianti. Sarah Bray, Writer/Contributor “The Somm Journal”, was able to give more of a wine trade perspective about Chianti. And finally, Luiz Alberto, Founder and CEO of TheWineHub and creator of the #winelover social media community, with almost 19,000 members, was able to talk about what he was seeing from his community in regards to Chianti.

Ray Isle and Sarah Bray confirmed the Consorzio’s claims that Chianti has increased in quality over the years. They added that their readership wanted to see more articles about Chianti and Tuscany in general. It was also expressed that Chianti is one of the best value wines under $15 dollars in the US and especially New York City. 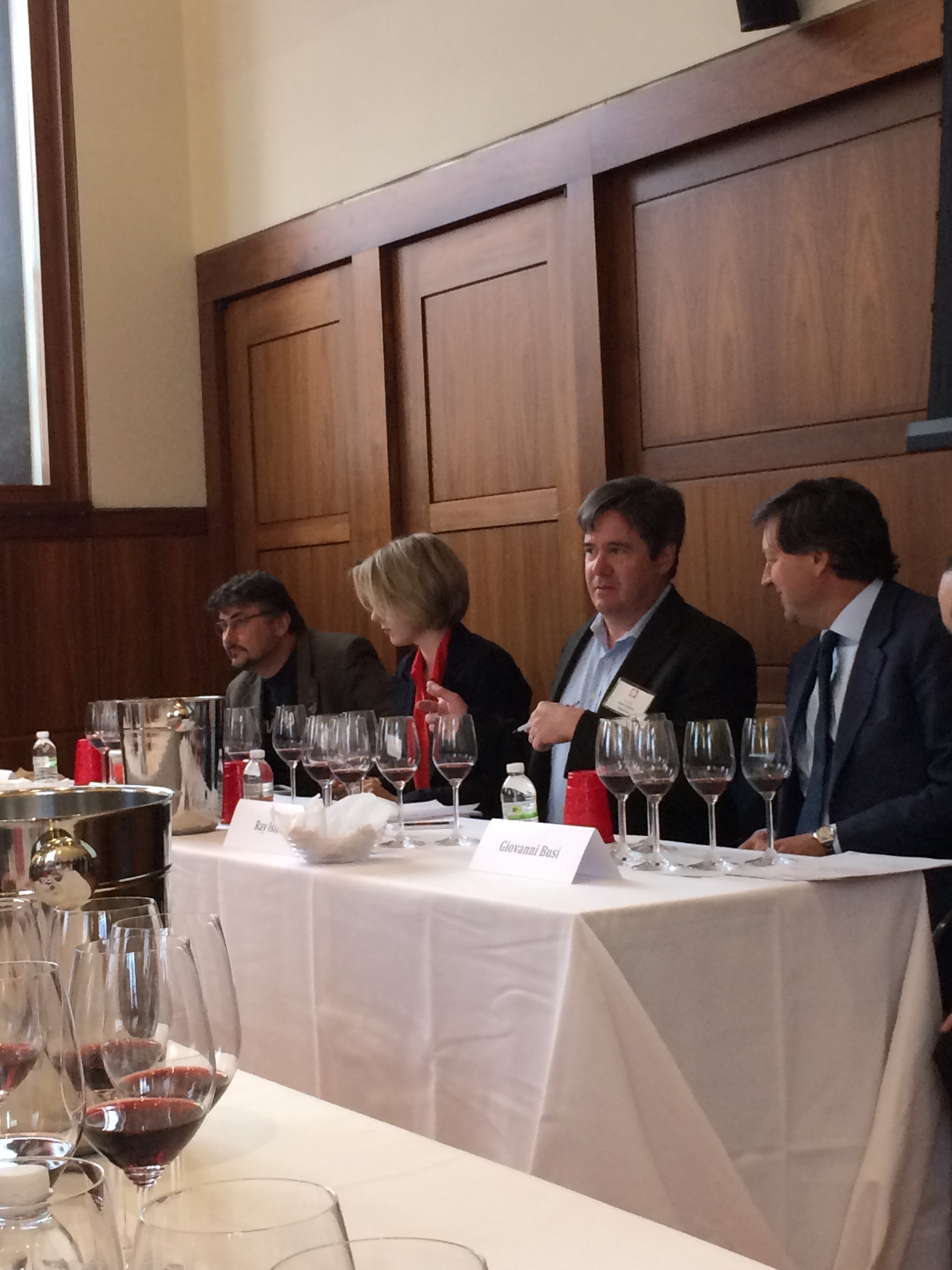 But since there were mainly New York City wine buyers for restaurants and retail stores in the audience, there was a question of how to sell Chianti over $15 dollars, and in some cases over $30 dollars. Some people in the audience said that many of their customers complained about expensive Chianti and did not see the point of buying it. Giovanni Busi tried to answer this question from the Consorzio point of view. The Consorzio feels that the image of Chianti was damaged in the past by not only poor production, but by it being viewed as a simple red wine in the traditional fiasco bottle (close-fitting straw basket around the bottle). Because of this problem with the overall image they have decided to place their funding into raising the brand image and quality of Chianti as a whole. He did acknowledge that there were higher quality differences with those Chianti wines that came from a specific sub-zone, but they could not place their energies into bringing awareness to the sub-zones until they had brought the glory back to Chianti’s name.

This answer was not completely satisfactory to everyone in the room, and hence a few debates broke out.

Luiz Alberto then urged us to taste the Chianti wines that we had in front of us. Yes, they were all different in their own way, with varying levels of complexity and concentration. But Luiz simply said that when he tasted all of the wines, each one said, “I am a Chianti”.

Luiz Alberto is a wine expert who is a Master of Wine candidate, named one of the top five Italian Wine Ambassadors at the most recent Vinitaly, and he could certainly debate the various issues that were being argued in that seminar on that day. But with all his knowledge and experience he also knows we can never forget that sometimes we need to just smell, taste, enjoy and connect. Every Chianti wine reminds us of a place, a culture, great food and warm conversation.

Because we are New Yorkers, the arguing still continued, but thanks to Luiz Alberto’s reminder, we could agree on one point: We were Chianti lovers!

2013 Straccali Chianti ($9): This is a great representation of an entry level Chianti. Bright sour cherry with fresh acidity. Also, you can find this wine in the traditional fiasco basket, as well as a regular wine bottle. The fiasco basket is becoming popular with younger people in the New York City area. Some feel this popularity is due to them trying to be ironic. The fiasco version will cost a couple dollars more than the regular bottle version. But either way, this is the perfect wine to have with a slice of pizza.

2014 La Spinetta Sangiovese Rosato, Tuscany ($20): 50% Sangiovese and 50% Prugnolo Gentile (a Sangiovese clone). This is a beautiful Tuscan rosé with aromas of purple flowers and honeysuckle with a delicious pomegranate flavor. This rosé can be drunk now or it can improve with a couple of years of aging – unlike most rosés which need to be consumed immediately.

2006 Querciabella Batar IGT White, Tuscany ($90): 50% Chardonnay and 50% Pinot Blanc blend. Querciabella is not only a producer that has been impressing some of the top Italian wine critics with their reds, but they have also proven that it is possible to make a white wine in Tuscany that can rival any great white wine of France. A richly textured, lush palate with juicy peach flavors and stony minerality. This wine is simply a dream come true!