Triangle Shirtwaist Factory Fire: a Memorial for a Defining Moment

Carrying the mock shirtwaist on a pole with the name of Maria Giuseppa (Tortorelli) Lauletti, 33, I felt the weight of her history, knowing that until a few years ago, she had been among the six “unknowns,” until genealogist, Michael Hirsch identified her five years ago.

Born in 1878, on March 19, St. Joseph’s Day, the saint for whom she was obviously named, she married Edigio Lauletti, 19 in 1896; together they lived at 133 Thompson St., just a few blocks from the fire, but sometime between 1906 and 1911, Egidio passed away leaving Maria a widow with five children. She and her younger sister, Isabella, 18 at the time, worked as garment workers at the Triangle Waist Company on the 9th floor of the Asch Building on the northwest corner of Greene Street and Washington Place. (Landmarked, it is now NYU’s Brown Building.) 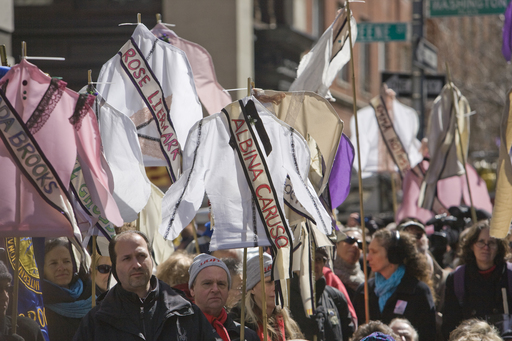 They would be among nine sets of siblings who would perish in one of the saddest industrial accidents in the U.S., the Triangle Shirtwaist Factory fire that grips the imaginations of generations, and new immigrants. Of the 146 victims, 30 were younger than age 18 with two 14-year-olds; 23 who were age 18 and 14 victims, including Maria Giuseppa Lauletti who were older than age 30; and two victims were 40 and older.

The weather that Saturday, March 25, 1911 was much like it was on Wednesday, March 25; a crisp and sunny winter day. The city was quiet; the Jewish girls were working on the Sabbath, illustrating their economic need; and while the owners of the factory were not as bad as some, they defied child labor laws and did not follow even the flimsiest of fire regulations. 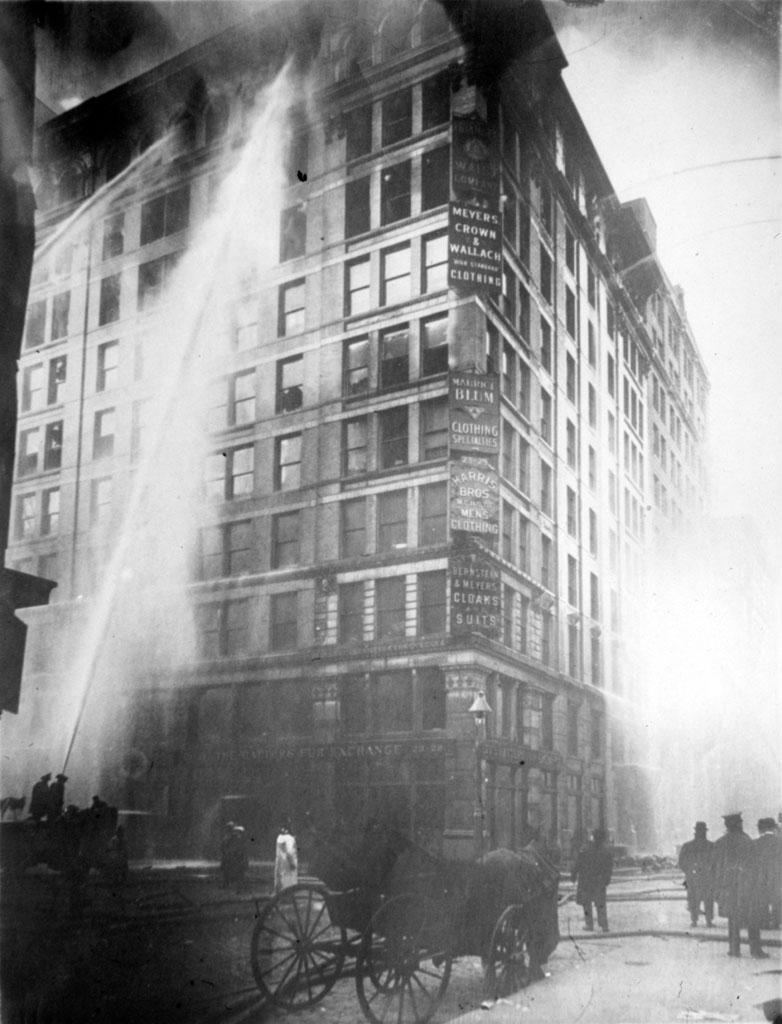 Until the destruction of the World Trade Center on September 11, 2001, the Triangle Shirtwaist fire was considered the deadliest workplace disaster in New York City and had a profound influence on building codes, and labor laws. Out of the ashes were the seeds for the New Deal two decades later attracting several young women – Clara Lemlich, Frances Perkins and Rose Schniderman – who took up the charge. A key organizer in the dressmakers’ strike of 1919, Italian American, Angela Bambace became the first Italian American woman to be elected President of the International Ladies Garment Workers Union in 1956.

The owners of the Triangle Shirtwaist Factory, Max Blanck and Isaac Harris were indicted on charges of first- and second-degree manslaughter in mid-April 1911.  Despite the testimony of 103 witnesses, the jury acquitted Blanck and Harris on December 27 in part by belittling the witnesses for whom English was their second language. Reparations to the families were very small.

On a personal note, my 96-year-old mother recalls expressing a desire to be a dressmaker but her Calabrian-born mother flinched as the Triangle fire had only taken place a few years before her birth. Rebelling against her mother who would have preferred she become an office worker, she and her friend recalled their first job interview in Named for Royalty that won Honorable Mention from the Allen Ginsberg Poetry Contest:

the names of all the King’s daughters. I just hated it.

There I was sewing buttons on cardboard squares,

I remember the shop I went to for my first job.

It was down some steps on South St., like a dungeon.

All the girls at the machines were wearing

their underwear and skimpy blouses.I was so proud

of my diploma how smart I was and all the floor

man wanted was to see me in my underwear.

Children attending this year’s ceremony were aged from 7-12 and came to the Greenwich Village from various schools including Immaculate Conception in Astoria, and Trilock, an alternative school in Brooklyn and several public schools. 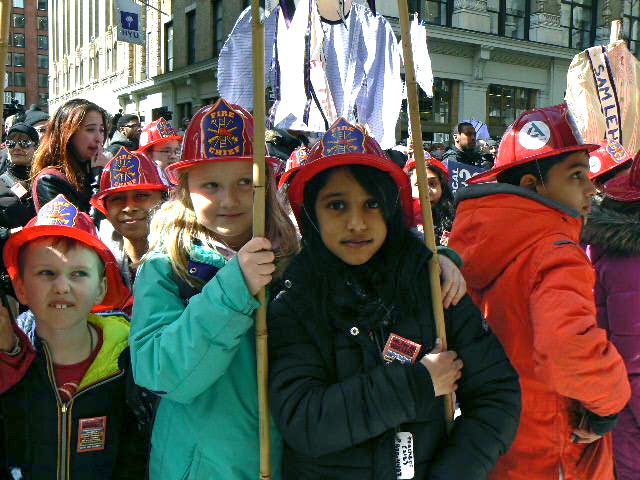 Eight-year-old Ruby talked about what it meant to be there, “The bosses escaped through an adjoining building,” she said. Her parents are both union organizers so she’s an old hand at attending demonstrations. “I know all the songs and I know that some bosses think they can do whatever they want…back then, the girls had no unions to help them.”

Poet Bracha Nechama Bomze read from her newly released book, Love Justice. Her paternal grandmother, Schifra Bomze was a proud member of the International Ladies Garment Workers Union (ILGWU) and is buried with her “union sisters and brothers” in the ILGWU plot at Beth Moses cemetery.

She told of an anecdote grandmother Schifra shared with her: She was fast and often volunteered to rip out and fix the mistakes of her sister workers so they would get paid enough to eat, her union leader complimented her but her bosses complained that she helped other workers (rather than churning out perfect work at breakneck speed!). In response, she would flash her union card, banged her fist on her sewing machine, and declare to the factory boss, “You take what you get, not a stitch more!”. 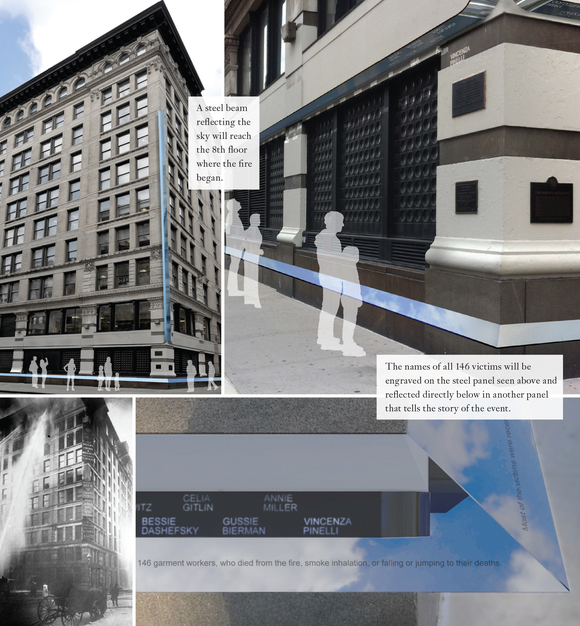 The annual event attracts the New York Labor Choir, politicians, labor leaders, rank and file members of the airport workers and the New York City Fire Department that tolls the bell with each victim’s names participants call out as they lay carnations on the sidewalk where the girls bodies fell in 1911.

Soon a memorial will take a prominent place on this corner. Suzanne Pred Bass, descendant of fire victim Rosie Weiner, says, “The memorial to the Triangle fire will be important and gratifying to family members because it ensures that their tragic loss will not be forgotten. It will speak to future generations about the changes to working conditions made because of the fire.”

The winners of The Remember the Triangle Fire Coalition’s two-phase international memorial design competition are Richard Joon Yoo and Uri Wegman for “Reframing the Sky,” a design featuring graceful steel panels that are visible from a distance.

The mission of the Remember the Triangle Fire Coalition, and Kheel Center for Labor-Management Documentation and Archives at Cornell University is to educate the public about the Triangle Shirtwaist Factory Fire through ongoing projects and collecting documents about the victims’ lives.

Today, the victims are no longer statistics in history books or little faces and shattered bodies in sepia-toned photos. Each ceremony is yet another opportunity to raise people’s consciousness of those days and these days.

Just two years ago the Rana Plaza factory collapsed in Bangladesh, killing more than 1,130 garment workers, crushed under eight floors of concrete; a tragedy demonstrating there is much work to do.

It’s not the Old East Village, but it’s still the Good Old Chianti