Tight, Holy and Wholly. The Fight against Female Genital Mutilation

“I was the first of three girl cousins to be cut that day. We were awakened early as it was to be done before dawn. The old lady who came to do it was dressed in black and was very violent. She sometimes hit me and had four people hold me down. There was a lot of blood. I used to have a lot of nightmares afterwards and was psychologically traumatized because of it. On my wedding day, it brought back many [difficult] memories.”  – Mansoura Mohamed of Cairo.

It was very hard to listen to the words coming from the lips of the young women speaking about their traumatic experiences of either female circumcision, the reopening process or both. Mariam Mossad of Egypt; Naima Abdullahi from Kenya and Haja Aicha from Sudan are only a few cases. One other in particular is Jaha Dukureh of The Gambia, a survivor of the heinous of act of Female Genital Mutilation (FGM) who spoke at a United Nations New York headquarters press conference held Friday February 6 in observation of The International Day of Zero Tolerance to Female Genital Mutilation.

FGM is a procedure to alter and seal female the genitalia (for non-medical reasons) performed out of a deep-rooted sense of inequality between sexes and discrimination against females. No health benefits can be attributed to any of the reasons why FGM is carried out. It actually harms females in more ways than can be imagined – not just physically, but emotionally and psychologically. Removing healthy and normal female genital tissue not only interferes with the natural functions of the female body but it inflicts high amounts of stress and can be constituted as torture. An estimated 100-140 million females have undergone some form of FGM so far. If the trend continues at its current rate another 15 million more females are likely to undergo the process by 2020. 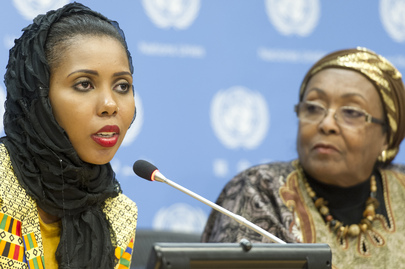 The sealing-up process was performed on Dukureh during her infancy, as an in-tact hymen made her of higher value when it was time for her to be offered to a husband via another ancient practice called child-marriage. Dukureh recalls that after being shipped off to the United States at 15 years old into a pre-arranged marriage, she had to be ‘reopened’ in order for her husband to have sex with her to bear him children. “I was so young and I didn’t even realize something was wrong. Plus, at 15 you didn’t say or do anything.” She is now in her mid-twenties and has since managed to escape that marriage and is vigilantly campaigning against FGM, so this is not about a decades- or centuries-old issue.

Yet, the UN commemoration day showed reasons to be joyful. Twelve years have passed since first lady of Nigeria, Mrs. Stella Obasanjo, officially declared the 2003 establishment of Zero Tolerance for FGM during a conference organized by the Inter-African Committee on Traditional Practices Affecting the Health of Women and Children in standing out boldly against the monstrous act and there has been a wealth of success. Campaigning and collaborative efforts around the world are becoming more vigilant – carried out by some who have emerged from the process; by several UN organizations, agencies and legislative branches; by governmental officials and other groups. And each year the success rate is higher. Two new resolutions have also been adopted, A/RES/67/146   in December 2012  and A/RES/69/150  in December 2014 where the UN General Assembly called for increased and intensified efforts against FGM,  including training of medical personnel, social workers and community and religious leaders to ensure they provide competent, supportive services and care to those at risk of or who have undergone FGM. The latter resolution stated that the elimination of FGM be given due consideration as a main issue in the elaboration of the post-2015 development agenda.

The United Nations Fund for Population Activities (UNFPA) and T United Nations International Children's Emergency Fund (UNICEF) both head the largest program  that avidly works on a global scale toward total eradication of FGM. Through countless outreach programs and activities, more countries have both abandoned the practice are join in the struggle against it – despite the fact that some are still holding onto what they feel is the need to keep their young girls “clean and pure.”

Secretary-General Ban Ki-Moon, in his message on the Day , spoke via Webcast during a panel discussion. He expressed being inspired by actions already being taken by health professionals, as the result of support from the UNFPA-UNICEF joint program on FGM. “Change is coming from within the communities. Breaking the silence and disproving the myths around female genital mutilation are the first steps along the way to eliminating it altogether.” Mr. Ban said he actively joins his UN colleagues in calling upon more health workers around the world to eliminate this deeply harmful practice.

For the greater good, weak and obsolete arguments of tradition and religion are waning away as FGM is now internationally recognized as a total violation of the human rights of girls and women. The practice, which is a total violation the rights of females and which hinders them from sustaining solid health, security and physical integrity, is mainly concentrated Africa and the Middle East. Also, due to migration and people bringing their traditions with them, FGM is also carried out in parts of Asia, Western Europe, several countries in The Americas, and Oceania. Recent statistics show that more than 90 percent of Malay Muslim females have been cut.

In the countries where FGM is almost universal [such as Somalia, Guinea, Djibouti and Egypt], almost one out of every five females had been mutilated as a child. In Egypt alone, the percentage rate of females who have been cut is higher than 90 percent.  In The Gambia, where prevalence is at a 76 percent rate, three out of every four females get cut. Sierra Leone which had a 94 percent prevalence rate, has reported a six percent decrease between 2006 and 2010 – which is a huge success because the country still has not implemented laws prohibiting the act, according to the country’s Demographic and Health Survey. And according to the 2010 Sudan household and demographic survey, 88 percent  of Sudanese females have been subjected to FGM.

In Somalia, where records show that roughly 98 percent of females have been mutilated, FGM has now specifically prohibited. The attempt was quite a daunting task to have embarked on but the positive result is a very good accomplishment. Neighboring country Somaliland is said to have been a good example for Somali, as one of FGM’s major warriors Dr. Edna Adan Ismail, who was trained in Britain, has undertaken quite a few creative steps to educate female about their bodies. And in Mali, where thousands of girls are still mutilated annually for various cultural and religious beliefs, a distinguished religious preacher from a town called Tingolé, Imam El Hadj Zoumana, says he is trying his best to use his influence to change the traditional attitudes of the community. “FGM carries harmful health consequences and had no religious sanction, as many are willing to believe.” He is leading the fight to end the practice in his community.

The convicting and sentencing of an Egyptian doctor who had still performed the procedure on a 13-year old girl, seven years after the act had been deemed criminal act in the country, must have been a hoorah for many teens and their parents in Egypt. What’s more, the procedure failed, resulting in the death of the teen. Therefore her father, too, was sentenced for having allowed his daughter to be mutilated. Mansoura Mohamed, who was mutilated at a very young age stood next to her husband and their 14-year-old daughter while being interviewed and said “We [she and her husband Rageb] made an agreement not to mutilate Ghada [their daughter].”

Mansoura, now 33, says she was very traumatized by the procedure but has since come to terms with the experience, although it took a quite a few years. She is happy her child does not have to go through that in this day and age.

Draghi: Protect National Recovery and Resilience Plan From the Mafia