The United States of America will be among 147 nations that will participate in the EXPO Milano 2015, the Universal Exposition to be held in Milan (Italy) from May to October of that year. We had the opportunity to have a talk with James Biber, the New York based architect designing the US pavilion. He explained the concept behind his design to us, and told us why Americans should use the EXPO as an opportunity to visit Italy.

What is the concept you are working on for the American pavilion?

We wanted it to be an invitation to enter. Pavilions are often closed boxes –you have a door in and a door out. We wanted to avoid all that. There will be many different layers to experience the pavilion. You can stand in line and see a great media show, or wander up the ramp to the boardwalk and experience the social environment, the incredible media display, the inside of the vertical farm, and the outside gardens as well. On the roof there will be an even more flexible space where there will be movies, discussions, cocktail lounges and evening events. It has three large levels that are all very different. 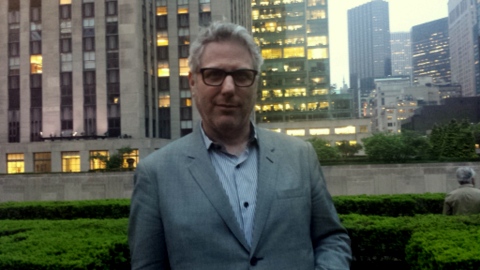 Outside there will be a fantastic, enormous vertical farm which is a demonstration farm being harvested and with spectacular aerial shows. It is the content of the pavilion that is very complex. The building itself is centered around American agriculture and in particular about American agriculture creating simple, honest, and straightforward structures that are open and easy to understand. It's not a statement about complexity or confusion or impressing the world. Expos tend to be like a football field –every country tries to look more powerful than the next but I think that that is an old game. We are trying to make the building more transparent, more open and more inviting than it used to be.

What is your experience with sustainable architecture?

Sustainable architecture is part of what we've always done. We've always been involved in building permanent structures – buildings that last and require the lowest possible maintenance and energy consumption.

Besides the vertical farm, what else would be considered sustainable in the pavilion?

On the roof there is a canopy of photovoltaic glass that will produce the energy needed to run the air cooling system. It will also feature a special glass that we are going to tint to create shade during the sunniest days. It will also open up in order to create cool during the hottest days. Other spaces will be cooled with natural breezes. The energy use is very low. The water is all recycled. Now, I also have to admit that it is only up for six months, and that's not very sustainable. But, we have arranged the elevators and escalators to be reused. We informed the people that we received the wood for the boardwalk from that we only wanted to borrow it instead of making a purchase, and in six months they can have it back up for sale. We're also looking for a place in Italy to permanently relocate the vertical farm afterwards. We have even arranged for the electro chromo glass on the roof to be returned to its manufacturer as well. All steel is recycled and there is no concrete except for the foundations. Every single piece of material will be recycled. We want to trash as little as possible.

Agriculture in the world has to change. We cannot feed everybody on the planet well enough now, and soon there will be two billion more people to feed. The pavilion will stand as a point of discussion and debate over how we can feed the planet in the future. There will be many solutions, but also a number of questions. There are a lot of answers as well as a lot of questions. We don't try to take a position on those answers but we try to propose the questions, so that a real discussion can take place. There are some issues, like for instance GMOs, that are very emotionally received, but I think it is a discussion that everybody needs to have about what these things mean. The whole idea of monoculture is a very big issue. Even though industrialized agriculture is a part of US farms, many things are being reconsidered, even by the government and the largest agriculture companies.

Do you believe in the power of events like the Expo to create that kind of debate?

I do believe that events like the Expo can raise questions in a public way, in a way that might get lost in smaller discussions. It is an international forum and we are also in an internationally competitive landscape. All the countries have to be at their best and bring their brightest people to have this discussion. Where else could we have a six months discussion about something this important?

Are there going to be actual chances to have that discussion with other countries during the event?

Yes, part of our team is working on arranging forums and debates.

Why should Americans come visit the Expo and the American pavilion?

They should come visit Italy just for Italy. They don't need the Expo to come. But for people who love design – and Milan is really a city of design – and for people who know the Salone (a furniture design event annually held in Milan), the Expo will be a six month long Salone –a real concentration of design. And it will also be a hub for food. So for those who love design and food (and who doesn't love design and food, or at least one of them?) it seems like the perfect moment to come. I love Milan and I think New Yorkers will also love it. It's a big city. It's very commercial and it's also very dense and fast. People will go to Milan for the same reasons they go to New York – a very big experience. I'll be there!