No Result
View All Result
in
in
0

Compromising for a Dream

After deciding on the house, there began the delicate dance of getting to the "compromesso"

The first definition on Google Translate for the word compromesso is “compromise”. The second definition is “preliminary agreement”.  So it’s somewhere between a compromise and a promise…an interesting balance, and one of the beautiful conundrums of learning a new language. When my husband Jesse and I decided on the house we wanted to buy in Le Marche, there began a protracted and delicate dance of getting to the compromesso  ̶  the legally binding document by which all of the many parties involved agreed to a price, a precisely outlined parcel of property, access to that property and transfer of funds. Luckily, Jesse kept all of the emails that recount the sometimes nerve-wracking details of us neophyte foreigners trying to buy property abroad. Here’s how it all unfolded.

Before we’d hardly even gotten into it, a number of obvious questions arose based on our experience with another house in which we’d been interested. In short, was the house really for sale? We now knew that in Italian inheritance law, property is divided equally between heirs, and  (we thank the Italians for this) there is no discrimination toward the female heirs. So if Grandfather dies, his property is divided evenly between his daughters and his sons. If they have descendants, then there is a whole other host of cousins that enter the mix. There were five owners listed for the property we wanted to buy. We had to find out if there were any hidden heirs we didn’t know about who might cause trouble down the road; whether or not those five owners had actually agreed to sell the property; and if all of their legal identities had been properly registered with the municipal government or comune.

Corinna and James, the British couple representing the owners in selling the house we wanted, became our representatives as well, walking and coaching us through the steps, explaining the inexplicables and gently nudging to keep the whole process moving along. Corinna went immediately to the commune to see if the sons of one of the owners were also listed as property holders and needed to be added to the contract. Jesse immediately contacted an attorney whose card he’d picked up at one of the realty agencies we’d worked with. And Jesse also immediately enlisted the engineers Pasquale and his sister Saranella to prepare a cost estimate to render habitable this quasi-ruin before we put in our bid. Within a short time, our ground crew was assembled.

Three weeks later, our engineeers had produced what seemed an affordable estimate to rebuild the house, and we decided to make an offer to the owners. Corinna warned us that with pictures of the property on her website, any real estate agent might decide to list the house, find other eager buyers in these spring months, and outbid us. So suddenly the pressure was on for us to move quickly. Move quickly? With foreigners trying to buy property abroad? In Italy? Really? Oh, and by the way, here is the initial mapping for the property that was for sale and the surrounding lots: 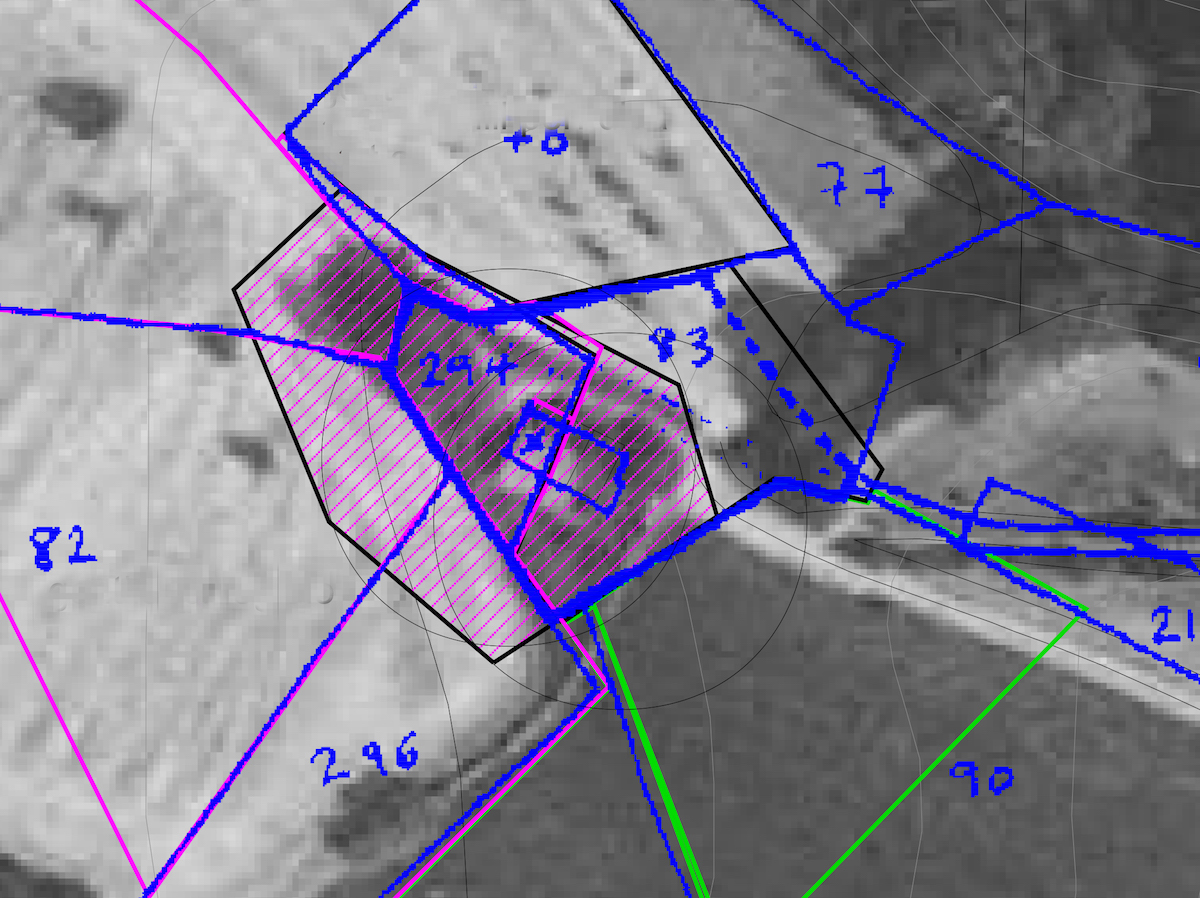 Simple, no? The five owners of this land each owned plots as delineated on this centrifugal map, all of their lots abutting the property we wanted to buy. We didn’t want a lot of land, as we understood the work required to care for it. But Pasquale had pointed out that some adjustment to enlarge the boundaries was necessary to give us adequate space for the septic system’s drainage field. In addition, we thought we would want a swimming pool, not just for ourselves but for the future value of the house if we ever decided to sell it. There was also a cute little pig house at the far end of the land and it really made sense to include it in our purchase so that one day we could turn it into storage or a pottery studio, but more importantly, so that it couldn’t be sold to someone else who might turn it into something horrible. It appeared then that each of the five owners would have a bit of land shaved off their plots to make our property a viable purchase. 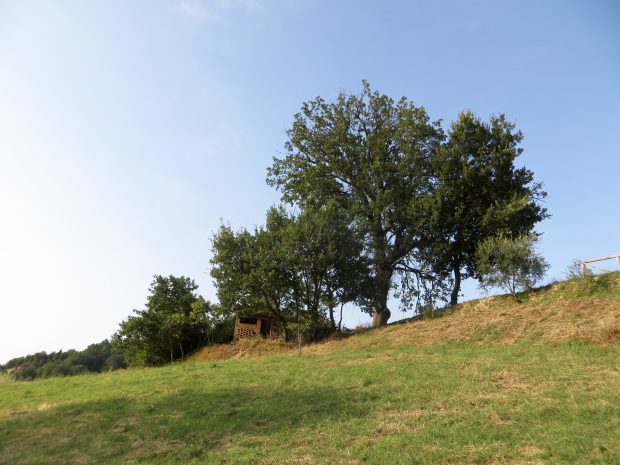 Enter Marcello, the friendly local geometra Jesse had met on the last trip. It’s no surprise, given the tiny size of the town, that he’s related to the Pascucci family who are the owners/sellers. Marcello is given the task of re-mapping the property in order to get all the family members’ approval, and to re-file the new maps with the commune. We flinch at his fee for this work, but are advised that this is the cost, and that Marcello is the best person to do it, given his knowledge and familiarity with the family. And indeed he proves himself indispensable, even visiting the “old ladies of Macerata,” who make up two of the five owners and convincing them that shaving a few square meters off their land will make for a good ROI once their asking price is met.

I should mention here how lucky we were to have Pasquale part of our team from the beginnings of this idea (and on through to the final punch list and ongoing maintenance of our house). It was he who recognized that the land as presented for sale was too small to properly operate a septic system. He was able to finesse the adjustment to our boundaries based on his understanding of the local farmers’ needs in accessing the fields that surrounded us, and his too being related to a good portion of the town. As an engineer, Pasquale and his partner/sister Saranella created a design for our house that respected the traditions of old farm houses, was responsive to our wishes, and that emphasized keeping water away from the house, energy efficiency and structural soundness over giving us glass curtain walls to maximize the views. We were constantly grateful for their insights, integrity and creative problem solving.

The boundaries must be re-drawn. The entire team, including Ippolito Pascucci, the main owner of the land who will eventually become our cherished neighbor, meets at the site and sticks are sunk in the ground to demarcate the final boundaries. Maps are changed, questioned, negotiated, re-drawn and re-filed. There’s lots of backing and forth’ing and worries that our interests are not first in everyone’s minds  ̶  and here we sit, helpless and useless in Brooklyn, having put our complete and total trust in people we barely know.

At the end of April, our lawyer Mario has drafted the compromesso, which must be translated  ̶  according to Italian law, we can’t sign a legal document unless everyone is sure we understand what we’re signing. The clock is ticking and then we learn that the compromesso can be signed the next day ONLY if the searches for the shares of ownership for the last 40 years can be confirmed by the tax office. By the middle of May, the compromesso is still unsigned, waiting for some missing bit of information. Jesse is poised to purchase a plane ticket for the middle of June to sign the rogito, which is the formal contract, or deed to the house. If the compromesso is not signed soon, the rogito will not be ready for June. Finally on May 17, the compromesso is fully executed by Mario as our proxy, and Jesse can confirm his flight for the final signing of the deed.

Imagine a plain conference room in a modernish building in Macerata  ̶  no frescoes on the walls, no medieval fireplaces, no throne-like chairs with wooden arms as you might imagine an office space in Italy. It’s a warm day in June and Jesse arrives to meet for the first time the assorted Pascucci’s who are the owners of the land parcel and building we are about to buy. The other players in the room include Marcello, the geometra who has drawn all the maps and sweet-talked the Old Ladies of Macerata; Mario, our lawyer whom we’d met on a coincidental visit to New York in which we’d taken him to lunch at the Oyster Bar at Grand Central Terminal; Corinna who has been maneurvering since January to get to this day; and a stunning young notaia with 5-inch heels, skinny jeans and shiny brown hair to her waist. It is the notaio‘s job to assure the legality of the paperwork that enables this transfer of property and record documentation of these transactions with the appropriate government entities. This position doesn’t really exist in the U.S.  ̶  American notaries mainly verify signatures on official documents and assure that the signers understand what they have just signed. In Italy, the notai also confirm the actual identity of the parties, file property titles with local government so that they become part of the public record, plus they calculate, collect and pay property taxes. They are important and intimidating.

Documents are signed, hands shaken, checks written, photos taken. Jesse asks Umberto, son of Ippolito and the only Pascucci family member in the room under 50, about the history of the house. Umberto, who will become a great friend and neighbor, explains that this information can be hard to glean from Italian families, but that he’ll come down to the house that afternoon and tell Jesse the story. The house is now ours, and Jesse borrows a machete from the agriturismo where we stay, and spends hours at his new home  ̶  it is truly a dream come true  ̶  hacking away at an intractable vine that is choking OUR giant oak tree. The oak tree will eventually almost recover from the strangling vines, and the insult of having cranes, trucks, gravel and construction materials surround it for two summers. It’s the tree under which we’ll have lunch every day the weather is nice for many years to come. 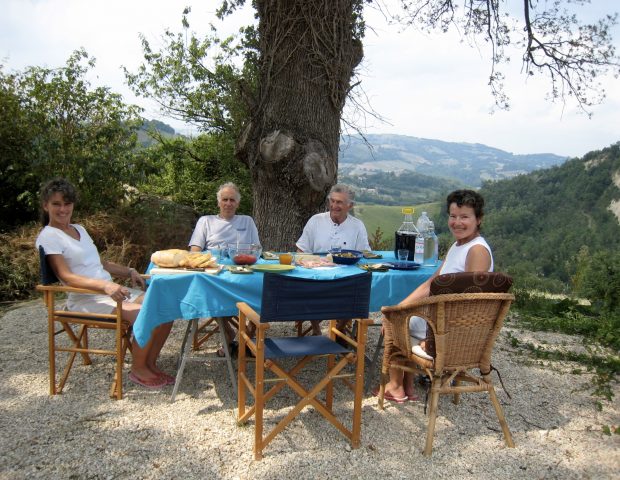