OperaWine at the 50th Anniversary of Vinitaly

Last week, I had the great pleasure of attending the 50th Anniversary of Vinitaly. The highlight of my experience was OperaWine on the 9th of April. OperaWine is the collaboration between Veronafiere, Vinitaly and Wine Spectator to present the 100 greatest Italian wine producers. Every great Italian wine you can imagine was there and it was truly heaven for an Italian wine lover, like myself, to attend such an event.

OperaWine started off with a press conference that was led by Stevie Kim, Managing Director of Vinitaly International, and Thomas Matthews, Executive Editor of Wine Specta 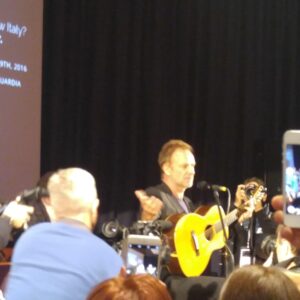 tor, at the Palazzo Gran Guardia in Verona. Their introduction explained the importance of showcasing the range of great Italian producers that can be found in various different regions, which ultimately shows the greatness of Italy as a wine producing country. Also, Stevie Kim talked about the introduction of Vinitaly and the City, which presented wine tastings with other cultural events such as music and fashion in the heart of Verona. Vinitaly and the City not only enhanced the overall cultural experience for wine lovers, but it helped to keep the Vinitaly fair itself more focused for wine buyers and journalists.

This year’s press conference will probably go down as one of the most special as Sting and Trudie Styler made an unexpected appearance. Trudie Styler talked about how honored they were to have their winery, Il Palagio, be part of OperaWine. She spoke humbly about the great team they have assembled to make their wines, and also, she was generous enough to share how much their Tuscan estate, and living in Italy, meant to her and Sting. Tuscany was where they could have their precious oasis to privately be together to bask in their love for each other.

Then, if it could not get even better, Sting played two songs for us. The first was Message in a Bottle, which obviously was very fitting for the occasion. And then, he sang Fields of Gold which was inspired by the loss of both his parents to cancer in the 1980s. It was a magical moment, Sting’s voice sounded in person just like how it sounds on his CDs. He was raw and open with great emotion in his voice that expressed itself in their Il Palagio’s 2011 Toscana Sister Moon wine that I tasted later that day.

The tasting was packed with those in the wine trade and journalists. It made me feel like a child to be surrounded by such incredible wines, and I could hear noises of pure joy coming from even the most seasoned wine professionals. It was wonderful to see Donnafugata’s Josè Rallo, with whom I just recently shared an enchanting afternoon in New York City. She was pouring her 2010 Passito di Pantelleria Ben Ryé, or as I like to call it, “liquid gold”. And it was great to meet so many legendary Italian wine producers  ̶  I give a few recommendations below from only three of these producers, and please keep in mind they were not necessarily the best, but they stood out because I was able to spend a significant amount of time talking to them and tasting their wine(s) – also, I wanted to recommend wines that I haven’t yet mentioned in this column.

To top off an already memorable day, the Gala Dinner took place in a temporary solarium built in the middle of the Arena di Verona, a Roman amphitheatre in Piazza Bra in Verona, built in the 1st century. It was a red carpet event that celebrated the best of the best among Italian producers. As I look back on OperaWine, I still cannot believe that I was part of such an unbelievably sublime day. It was also surreal because I am used to seeing many of these Italian producers in New York City when they visit. But it was even more special to see them in their home country surrounded by their rich Italian heritage. And it made me realize that the energy, the love for life, the beautiful wines and sumptuous food of the Italian people are key to what makes New York City the vibrant city it is today. In a strange way it seemed like my home away from home. 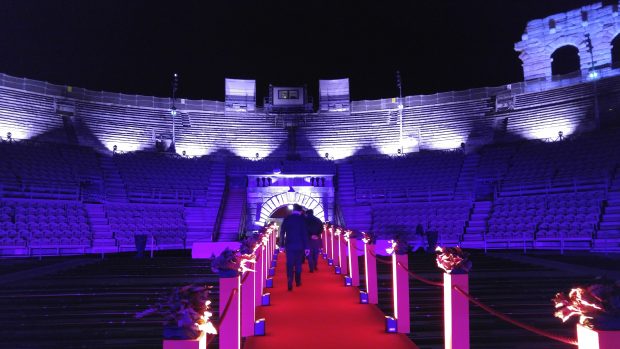 2015 Argiolas ‘Costamolino’ Vermentino di Sardegna, Sardinia, Italy ($12): Even though Argiolas was one of the 100 greatest Italian wine producers, I tasted this wine a couple days after OperaWine at the Vinitaly fair when I visited their booth. I have always known about the real value of Argiolas and how many of their wines give a lot of bang for your buck. This white wine made from Vermentino on the second-largest island in the Mediterranean, Sardinia, gives delicate flavors of white peach, lemon confit and a hint of pine nuts on the finish.

2012 Tasca D’Almerita Nerello Mascalese Sicilia Il Tascante, Sicily, Italy ($47): Nero d’Avola has always been viewed as the most important red grape of Sicily, but in recent years, many Sicilian wine lovers have discovered Nerello Mascalese grown on the volcanic soils of Mount Etna in Sicily. This wine had an exhilarating nose with smoky minerality, sweet tobacco and dried herbs with pretty black berry fruit.

Fantasy Wine (over $50)
2012 Tenuta San Guido, Sassicaia Sassicaia, Bolgheri, Tuscany, Italy ($155): A blend of 85% Cabernet Sauvignon and 15% Cabernet Franc. There is nothing unique about recommending Sassicaia but this 2012 is simply stunning and showing so well at such a young age. It was a warm vintage but early harvesting and plenty of water delivered at the right time during the growing season produced grapes that were not too overripe with lots of fruit and round tannins. This wine cascades on the palate with a velvety mouthfeel and the explosion of fruit and floral notes makes this wine a show stopper. It is tempting to drink now but it will only improve over the next 10 -12 years.