Donnafugata and the Enchanting World of Sicilian Wines

A wine and music tasting with José Rallo, the face and voice of the winery

The Donnafugata winery on Pantelleria, located in Khamma district. Photo: Courtesy of Donnafugata.

Donnafugata is one of the most well-known names in the wine world of Sicily. Their beautiful wines not only express the warmth of a place, but also the passion of the family who owns the winery.

A Tale of Women

Donnafugata literally means ‘woman in flight’ (donna in fuga) and it is a reference to Queen Maria Carolina, who fled Naples in the early 1800s on the arrival of Napoleon’s troops, finding refuge in the part of Sicily where their vineyards are now planted. This idea is symbolically represented by the logo of a woman with windblown hair that can be found on every one of their wine bottles.

There are great women associated with Donnafugata, which was well represented by José Rallo, who greeted me last week with an inviting smile and infectious laughter. I had never encountered someone with so much enthusiasm for life. José’s mother, Gabriella, was one of the first women in Sicily to work in the vineyards, bringing the quality of their vineyard grapes to a higher level. All of the wine labels are either created or inspired by Gabriello Rallo.

And as I like to say, it takes a strong man to appreciate a strong woman. Giacomo Rallo, José’s father, was the marketing force behind the great success of the wines his wife crafted, and now both of them have passed the reins to their children, José and her brother Antonio. José said that even at an early age, her father was open to her ideas to communicate the spirit of their wines to the world. Again, Giacomo Rallo is a strong man who acknowledged the brilliant and talented women who were in his life. 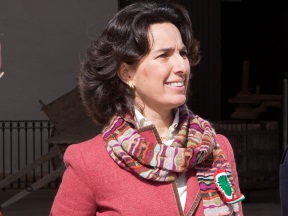 My lunch with José, at the Black Barn restaurant, in Manhattan, was one of the most enchanting experiences of my life. There was a small group of us, five women in total, in a private room with a delightful lunch paired nicely with the Donnafugata wines. José Rallo has a passion for music, as well as wine, and she has been lucky enough to be gifted with a gorgeous voice.

That day, we were treated to José singing to us, each song being inspired by each wine. So as I tasted her wines, I listened to her sing, transporting me, and all of us that day, to another place – a charming place filled with excitement, passion and flavor.

Some may see the word Donnafugata (donna in fuga) meaning ‘woman in flight’ to mean a woman running away from horrible things. Yes, that may be part of it. But I like to also think that it means a woman who takes flight, finds her wings and inspires the world by empowering herself. And that is what happened during that lunch. I saw a woman spread her wings, and she took me on a beautiful flight to a magical world expressing the spirit of her wines. 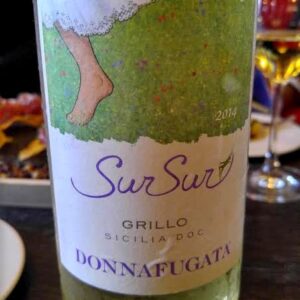 2014 Donnafugata Anthilia, Sicily, Italy ($13): mainly from the Catarratto grape variety, which is a variety well-known in Sicily. I bought this wine on my own, a longtime favorite. This wine was a refreshing white wine with flavors of grapefruit that pairs perfectly with seafood. I tried another richer white with Ms. Rallo called SurSur made from 100% Grillo. It only costs a few dollars more (ranging between $16-18) and it gives lots of tropical fruits with slight floral notes.

2011 Donnafugata Tancredi, Sicily, Italy ($28): Mainly Cabernet Sauvignon and Nero d’Avola grape varieties. This wine was generous with a round body, smooth texture and juicy black berry flavors with a touch of cocoa powder. A rich wine that can be enjoyed with or without food. 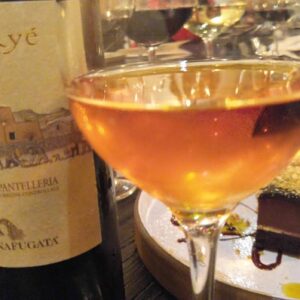 2013 Donnafugata Ben Ryé, Passito di Pantelleria, Island of Pantelleria, Sicily, Italy ($36 for half bottle): Zibibbo (Muscat) grape variety. These grapes are grown in volcanic soil in a low bush vine that has been inscribed on the UNESCO World Heritage List as a ‘creative and sustainable practice’. The grapes are dried, which ultimately produces a wine with great complexity and viscosity. This wine had a stunning, golden color with flavors of dried apricots, honey and a smoky minerality. It had a flavorful and expressive finish.