Hofstra Students’ Voice on the Feisty Hillary vs. Trump

When it was announced in mid-July that Wright State University in Ohio would not host the first presidential debate of the 2016 campaign, citing safety and financial concerns, the honor fell to Hofstra University as an alternate. As the world probably knows by now, it’s not our first time welcoming the nation and the world’s media to campus. Hofstra hosted in both the 2008 and 2012 presidential campaigns, and is the first university to have the honor of organizing three consecutive debates.

Coming into class the day after debates in 2008, students who had volunteered were positively ecstatic and glowing with pride. They could not wait to tell me that once the debate was over, professional journalists were unanimous: Hofstra University had distinguished itself in the organization and logistics of such a monumental endeavor. It was not a coincidence that the Commission on Presidential Debates chose us again in 2012 and as an alternate for 2016.

The debates at Hofstra do not take place in a vacuum. Once the announcement was made in July, the entire University collectively shifted into high gear. From administrators, to staff to faculty and students, a panoply of events have been scheduled throughout this semester. Invited speakers already on campus over the past three weeks include former Louisiana governor Bobby Jindal, former Obama campaign director David Axelrod and Georgetown sociology professor Michael Eric Dyson. There have been panel discussions on infrastructure, foreign policy, Islamophobia, labor issues, Social Security, the Trans-Pacific Partnership, science and education. Long Island Teachers For Human Rights and the Hofstra Center for Civic Engagement hosted a full day of events and demonstrations, including a panel on the importance of the Latino vote in 2016, followed by a viewing party in the Helen Fortunoff Theater.

The considerable expenses pertaining to the debate were covered by the generosity of Hofstra alumni David S. Mack and Lawrence Herbert (who also endowed the Hofstra School of Communication). Another alumnus supporting the debate is Peter S. Kalikow who has endowed Hofstra’s Kalikow School of Government, Public Policy and International Affairs which also houses the Kalikow Center for the Study of the American Presidency and an endowed chair in Presidential Studies.

Arriving on the north campus mid-afternoon, the usually placid parking lots had been transformed into a media haven/heaven. Local, national and international journalists were here, from Carol D’Auria of local 1010 Wins Radio to powerhouses CNN, MSNBC, Fox News and Bloomberg, as were Sky and MediaSet from Italy. The big outfits had come with full-blown media sets, hosting commentators, analysts, and spin doctors. In a commentary on the state of journalism in America, the MSNBC, CNN and FoxNews sets were thronged with students and fans while the more staid professionals of Bloomberg News were off to the side with only a few onlookers and the C-Span truck looked positively lonely.  First-year student Sage Camosse, a Journalism major, told me: “Leading up to the debate I had a wonderful and unforgettable experience, I’m very happy I had the opportunity to walk around and see all the different news channels coverage as well as be interviewed by reporters from around the world.”

All during the day, afternoon and early evening, many student groups of varying political stripes were strolling the campus, engaging with the media, and generally participating in this messy process we call democracy. The messiness was apparent in other ways: As in past debates, Green Party candidate Jill Stein, denied a spot on the stage by the Commission for not breaking the 15% threshold in voting, was escorted from campus by security.

Hofstra’s policy is to turn over all debate tickets to students via a lottery. 7,500 students entered their name for the precious 300 tickets allotted to the University. (15 students from Wright State University were also given tickets to attend.) Other students, faculty, staff and administrators witnessed the debate at numerous viewing parties hosted across campus. President Stuart Rabinowitz—in what is now a Hofstra tradition—gracefully gave his ticket to a student.

Reactions from students were varied. Camosse, the Journalism major: “As for the debate itself I don’t feel like they discussed policies as much as they should have and that the mediator was a lot harder on Trump.  [He] didn’t press Clinton on issues like email and Benghazi.” The debate did not change his mind on whom to vote for. “The debate did not change my views. My final thoughts in a brief summary, the experience was amazing and something I will never forget, however the debate itself was lackluster and biased.”

History major Jonathan Fidis thought the debate should have been moderated better. “The candidates were very rude to each other,” he noted. “When one would interrupt the other, the moderator put little effort into stopping it.” 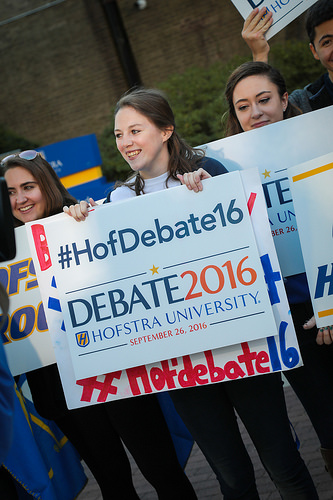 Fidis thought Hillary Clinton won the debate. “Her ideas were better supported by facts and history than Donald Trump’s. . . . [whose] plans are very weak and have little foundation based on what was said tonight. I also believe that Mrs. Clinton won the debate because she took all of Mr. Trump’s comments and criticism with grace and tact while Mr. Trump was very rude in refuting her claims against him.”

Fidis came away better informed about the candidates’ respective positions on a wide range of topics. “The Trump campaign is very focused on reducing the national debt, defeating ISIS, and stopping illegal immigration into the country. The Clinton campaign’s focus is more towards improving the living conditions of the citizens of our country, as well as the improving the United States’ international relations and reducing the national debt. Mrs. Clinton put a heavy emphasis on the reduction of gun violence and the improvement of race relations across the United States . . . Both candidates recognized the importance of reducing the nation’s debt. The question of immigrants from the Middle East and Mexico in regards to national security showed a difference of opinions between the two candidates. Donald Trump’s stance that Mexicans are criminal and Middle Easterners are terrorists reinforced my idea that there is a growing fear in this country that is housed in stereotypes rather than experience.”

Fidis also voiced a fervent wish that “after watching tonight’s debate, all I can hope is that some people have changed their minds about making America ‘great again.’”

Debate host and mediator Lester Holt seemed to have lost control over the debate (or at least over Donald Trump) in the very first segment. Throughout the course of the evening he failed to reign in Trump who interrupted Clinton dozens of times with snide remarks. To Clinton’s charge that he pays little or no taxes, Trump replied “That makes me smart.” To her charge that he claimed bankruptcy 6 times, he remarked “I take advantage of the laws of the nation.” Most shocking, but little commented on in the post-debate analysis, was Trump advocacy of what in effect is a war crime: if we are going into the Middle East, we should at least “take the oil.” Either he doesn’t know that confiscation of natural resources during a military occupation is against international law, or with political shrewdness he knows very well how a line like that plays in certain segments of American society.

This writer watched the debate from the Axinn Library with other faculty members and guests. My own mixed emotions are best summed up by two Twitter comments from non-professional political observers.

The outrageous talk show host Jerry Springer, self-proclaimed “ringmaster of civilization’s end” in a comment worthy of Marx (both Karl and Groucho), quipped “Hillary Clinton belongs in the White House. Donald Trump belongs on my show.”

“Quick reminder: Y’all think Hillary is slaying, but the idiotic majority in this country definitely think Donald is KILLING IT.”

For History and Political Science major Natasha Rappazzo, “The debate was just as wild as I thought it was going to be. I thought Clinton was well prepared and put together. Despite people thinking that she is sick, she looked good and she gave a great performance. Trump acted just like I expected him to act – he was rude, he dodged questions, and ill-informed. He embarrassed himself tonight. Trump not accepting that stop-and-frisk is unconstitutional was disturbing and spending even one minute on Obama’s citizenship was a waste of time.”

In politics, perception is paramount and Rappazzo had some thoughts on this critical component of the campaign: “Trump’s aggressive and loud demeanor did not look good next to Clinton who was calm and poised.”

But she came away disappointed about her a central concern: “I thought it was important that the topic of racial inequality and criminal justice reform were mentioned, but I don’t think either of them grasp the dire need to change the way people of color are treated, especially in the criminal justice system. Clinton says she wants to open up communication in communities and end bias, but the problem with racism runs deeper than bad communication. There needs to be access to better education and economic opportunities; this is where she needs to have a plan for change.

This afternoon, Rappazzo and her colleague Emile Beck, both Fellows of the Long Island Alliance for Peaceful Alternatives, together with Hofstra History Professor Carolyn Eisenberg, host a post-debate discussion and analysis at 12:45 in the Hofstra Cultural Center Theater. All past and forthcoming events can be found at Hofstra.edu/debate

Italian writers and commentators, such as journalist Beppe Severgnini, and Barbie Latzi Nadeau, have warned Americans that Donald Trump is an American version of Silvio Berlusconi.

Karl Marx, in writing about Napoleon III, remarked that history repeats itself, first as tragedy, then as farce. If we already had the tragedy of Mussolini and the farce of Berlusconi, how would we define a Trump presidency?

Stanislao G. Pugliese is professor of modern European history and the Queensboro Unico Distinguished Professor of Italian and Italian American Studies at Hofstra University. A specialist on modern Italy, the anti-fascist Resistance and Italian Jews, Dr. Pugliese is the author, editor or translator of a dozen books on Italian and Italian American history. In 2009, Farrar, Straus and Giroux published his book, Bitter Spring: A Life of Ignazio Silone which won the Fraenkel Prize in London, the Premio Flaiano in Italy and the Howard Marraro Prize from the American Historical Association.