Conversation with one of Tribeca's pioneers, an italian-born architect who began his professional work in Mayor John Lindsey’s Office in early '70s 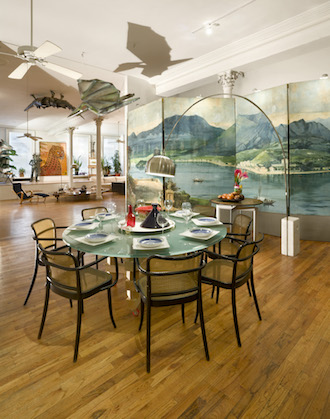 Roberto Brambilla, an Italian-born architect, began his professional work in Mayor John Lindsey’s Office in Tribeca, in the early ‘70s. His early projects envisioned pedestrian zones along Madison Avenue and Times Square (which were not virtually realized until  over 40 years later). Roberto is a visionary, who has witnessed enormous change in the downtown landscape, since moving there in 1970, when the streets were dotted with abandoned factory buildings and open parking lots. Tribeca was typically referred to as the lower west side.  The predominance of empty commercial space attracted many artists to the area. Since the ‘80s, large-scale conversion has transformed Tribeca into an upscale community.

When Roberto arrived in NY, he found his American counterparts were more focused on a need to make things work, than in pure aesthetic. A concept he admired. It was during these years, that his participation in the loft renaissance was more as an ‘artist’ than ‘architect’. He asserts that good architecture provides an emotional reaction for everyone, in a more immediate response. Good design stands on its own and should endure over the years. With it comes a commitment to planning strategies that are environmentally and socially sound. A belief that architecture is art and that art, at its best, provokes emotion. Accordingly he says, we strive to design places and spaces that stimulate the emotional response of the users. Ultimately his challenge is designing buildings and interiors which are poetic and responsive.

It was during this early period, that he became intrigued by the abundance of buildings that lay abandoned in Soho & Tribeca.  He realized an opportunity to restore the integrity of these buildings to the ‘grand scale’ originally intended.  When I asked him about the primary changes over the years, including new development, his response was immediate. He believes that much of this unique neighborhood has lost its creative magic, the lure for many in the early ‘80s. With that gone, the casual informality of spontaneity has been replaced by a stuffiness reminiscent of other less unique neighborhoods.  Through his lens he has witnessed a corporate overbuild, that has increased congestion and poses a heavy toll on public services. 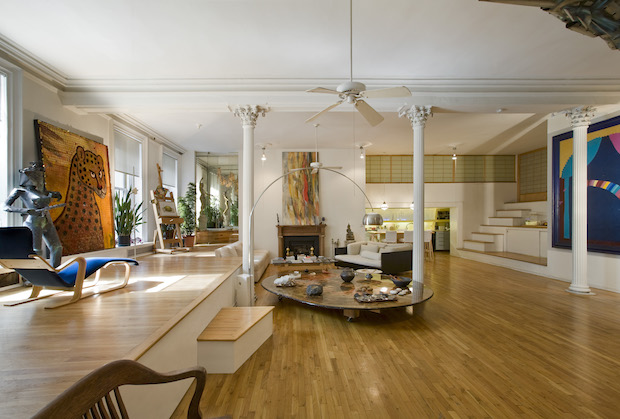 Roberto’s interest in Tribeca and Soho, at that time, was not just aesthetic but professional.   These semi-abandoned areas were in the process of rapid change.  His design was essential, in magnifying the richness of details such as the peeling of  exterior paint, the contribution of graffiti, the impact of light, both natural and artificial; while at the same time, enhancing the spatial elegance of these buildings and spaces. His most successful project, during this period, was ‘I Tre Merli’, an Italian Wine Bar on West Broadway that exemplified the downtown life-style of the ‘80s. Its design was praised by The New York Times as a “masterpiece of understatement” and by DOMUS (the Art & Architectural Magazine) as “one of the world’s most successful public places”. He attributes his early success to being a ‘foreigner’ by taking complete advantage with his accented use of the English language.  (footnote; after 40 + years, this formula is still working)

I was curious about how he envisions the future of Tribeca, either through architecture/ real estate/ the environment.
“Tribeca began its reincarnation from manufacturing-warehouses to residential lofts in the early ‘70s. At that time, I thought it would reflect the new face of Manhattan, where liberal free-thinkers, mostly young & creative, could thrive.  However, Tribeca’s strategic proximity to the Financial District turned it into a magnet for financial operatives and caused prices to skyrocket and forced artists to relocate. Moreover, the opening of new schools in a neighborhood that due to its industrial past, lacked them, attracted families, kids and pets, kindergartens and manicured community gardens and farmers’ markets. Today Tribeca is no longer the fresh face of New York City but a vibrant upper middle-class community, bursting with new development and enjoying some of the priciest real estate tags in the entire city”.

If you could make a personal imprint on your life in Tribeca, what would that be?
“I would like to create a place where free spirits meet and discuss their projects and ideas;  a kind of incubator for smart social, environmental and art-oriented projects that could have a positive impact on the life of the city. A couple of years ago, to promote this project, we assembled a team of artists, architects and film-makers to launch INFINITO NYC, a pop-up semi-public gallery in the back of our studio. This idea still needs to be developed further to achieve its full potential”. 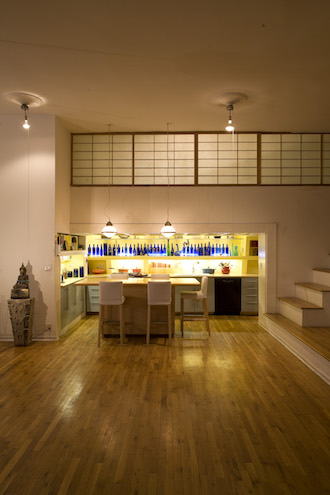 changes in Tribeca, over the years?
“Architecture is an interdisciplinary exercise which blends together poetry, structural engineering, environmental and economic matters. The architect’s mission is to create a cultural artifact, by mastering the combination of emotional and rational components.   Only a few have been successful in achieving this magical blend, while too many have lost the connection with their mission.   Tribeca has become a showcase of speculative developments with only a few of these magical touches left. Calatrava’s birdlike transportation terminal and the citys “salt shed”, are a few that come to mind”.

When I first discussed the idea for an interview with Roberto, he wondered why I was choosing him over others, in a community of celebrities. I felt that he exemplifies the anti- establishment chic that many downtowners aspire to. But most of all he represents the mood and style of this very unique section of Manhattan.

Privately, Roberto continues to live and work in Tribeca with his wife Rebeca San Andres, a fashion designer, photographer & for the past 15+yrs, a professor at FIT. Part of their loft was used as her atelier before being reconfigured, to create 2 additional units. Their loft (photographed here) has undergone many incarnations, more a work in process, showcasing Roberto’s architectural and design signature. It has been the inspiration for several feature films, music videos, fashion shoots, and some of the most memorable parties, I have ever attended.  He is a consummate host, as well as a skilled chef.  He & Rebeca exude warmth and a welcoming spirit to all fortunate enough to be on their guest list.