A new book on the story of Luigi Del Bianco, the true chief carver of Mount Rushmore

Luigi Del Bianco in Gutzon Borglum's studio at Mount Rushmore with the models for George Washington and Abraham Lincoln. Notice the torso and full dress on Washington; Borglum had originally planned to make Rushmore more than just the four faces, but lack of funding, skilled laborers and faulty rock precluded that. (Photo courtesy of Del Bianco Family Collection)

The word “credit” weighs heavily in today’s society. Receiving credit for hard work is a sacred value that fuels American progress. Acknowledgment is a must, not only in business, but for students, for athletes, for artists… Fortunately, we live in a time where it is easier to determine if people are taking credit for others’ work–a recent example would be Melania Trump’s speechwriter who plagiarized Michelle Obama in her speech at this year’s Republican National Convention.

While that discovery was immediate with today’s watchful press, native Italian Luigi del Bianco from Meduno went uncredited for his work in the 1930s until now. La Voce interviewed writer Douglas Gladstone to talk about this man, who played a much larger role in the creation of the Mount Rushmore monument than the world had ever known before the release of Gladstone’s new book, Carving a Niche for Himself: The Untold Story of Luigi Del Bianco.

Just like most Americans, Gladstone did not initially recognize the name Luigi del Bianco. Gladstone was dumbfounded after he listened to an NPR broadcast where Luigi Del Bianco’s son and grandson revealed that Del Bianco was actually the chief carver of Mount Rushmore National Memorial, the iconic American sculpture in Keystone, South Dakota depicting U.S. Presidents George Washington, Thomas Jefferson, Theodore Roosevelt, and Abraham Lincoln.    Throughout Gladstone’s entire life, no one has “ever mentioned anyone else associated with the project” that was conducted from 1933-1940.

Mount Rushmore means a lot to Gladstone. Talking to him about it brought back memories of his childhood. He said, “I loved Mount Rushmore! I just loved looking at those faces. I was blown away at the size of the carvings and mesmerized by the eyes.” Intrigued by the NPR story, Gladstone decided to look into Del Bianco’s story–his fascination eventually culminated into his new book.

Throughout our modern history we were told that Gutzon Borglum was the chief carver of the Mount Rushmore monument, and no one had any reason to doubt that fact. Kids all over the world associated the masterpiece to Borglum who in reality was not it’s chief carver.

You might be thinking: there is no way this is true; the National Park Service would never make such a mistake. At first the National Park Service would not recognize Del Bianco as chief carver because as Gladstone explained, “They claimed that since Borglum hired Del Bianco himself, and he was not hired through the federal government, they had no obligation to give him credit.”

Although Del Bianco died in 1969, 29 years after Mount Rushmore’s completion, his family kept fighting for the cause and only after 75 years of lobbying, following the presentation to the National Park Service of a letter written in 1935 by Gutzon Borglum naming Del Bianco the chief carver of the monument, did they recognize Del Bianco on their Facebook page on October 31, 2015. Although Del Bianco finally received some type of recognition, it is not enough. Luigi del Bianco did not suffer for hundreds of hours, 600 feet above the ground to simply be name-dropped on a Facebook page. He deserves some kind of legitimate credit because it truly was his work that has touched millions of lives, and as Gladstone stated, “His valuable work cannot be compared to everyone else’s.”

Gladstone told La Voce that “the more and more I learned, the more indignant I became.” Del Bianco deserves real recognition and praise for the incredible masterpiece, like a memorial, an organized celebration of his work, and an awareness project. Many Italians have been stripped of credit for their work like Del Bianco, and these inaccuracies must be corrected. Not only because it is their right to receive credit, but like Gladstone said, “so the future generations can appreciate their efforts.”

“This story is the American Dream and if it isn’t then I don’t know what is,” Gladstone said. Del Bianco came to America and worked just as thousands of immigrant families work every day to achieve success, and his story is one that must be passed on. As Gladstone told La Voce during the interview, “I hope everyone now thinks about Luigi Del Bianco because no one thought about him before the book.” 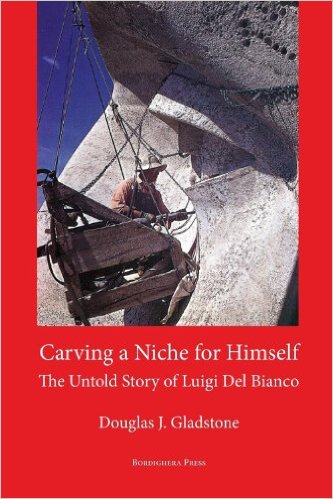 We encourage all to read Gladstone’s book as it brilliantly tells the story of an under-appreciated Italian immigrant, who with his family, fought till the day he died for his rightful credit. His story shows how quick people are willing to believe what they want to be true. As Gladstone said, “I hate to be puny but in this situation the truth was set in granite.” Gladstone’s book and Del Bianco’s story should be shared with the entire world because everyone deserves to know the truth about the carver of Mount Rushmore. Everyone deserves credit for their rightful work, especially when that work touches the lives of others.

Made in Italy Dominating the Game at MRket

Made in Italy Dominating the Game at MRket

Thinking to Orlando at the NYC Pride