The experienced former UN official discusses his new book, a critical analysis of the Organization

La Voce had the privilege to sit down with Abdelkader K. Abbadi at the UN Headquarters to discuss his new book, From The Garden to the Glass House: An Undiplomatic Look at the United Nations, 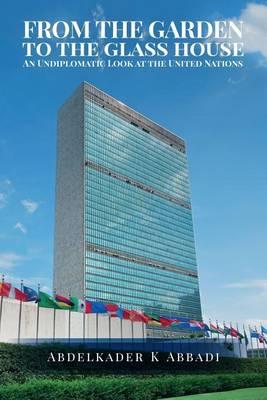 part-memoir and part-critique of the Organization he served for 30 years. Mr. Abbadi is one of the most experienced UN officials you will find still active at the United Nations as the Former Director of the Department of the Security Council, Former Special Advisor to the Delegation of Kyrgyzstan, and now an International Consultant on Global Affairs and Media Relations, as well as an author, lecturer, and UN Correspondent.

Mr. Abbadi began his education in his home village in the Atlas Mountains of Morocco. With the support of his uneducated parents, Mr. Abbadi pursued his education and eventually obtained a Ph.D. in political science from the University of California at Berkeley. He is married and speaks four languages (French, Arabic, Spanish, and English) at home with his three children and eight grandchildren. Unfortunately, his book has been excluded from the United Nations bookstore. “They say it is for commercial reasons, but I know it is for political reasons,” Abbadi said. His book is available at amazon.com and it is a precious critical analysis of the world’s most powerful international organization.

When did you start openly speaking out against some of the UN’s practices and why did that change come?

“I have always looked analytically and critically at the UN’s work, even when I was an Official of the Organization for thirty years. During those years, I have written about that work for the Paris-based Jeune Afrique Magazine. For example, I published several articles on the work of the Security Council and how to improve it in the fields of its reforms, peace-keeping, and preventive diplomacy. When I retired in 1997, I had more time to examine and ponder over the performance of the Organization.”

Can you explain what you meant in your book that there is an issue of topic inflation in the Security Council? Why has this happened?

“The Security Council has too many agenda items before it. Over the years, it added more and more items to its list. In the past, the Council concentrated its attention on subjects of great importance: political conflicts, aggressions, wars, etc…Now it addresses subjects that are not directly related to the maintenance of international peace and security. It deals with environmental and budgetary questions for example. Its agenda is overcrowded. It should refer those questions to the appropriate organs of the United Nations.”

In the history of the UN, the Security Council Permanent Members (the so called P5: USA, China, Russia, France and UK) have been nations “more equal” than the others. Now, seen from your long experience at the UN, how would you rate each of the big 5 according to their respect for the UN Charter?

“All countries, big or small, are equal according to the UN Charter. Each one of them has one vote in the UN General Assembly. But the situation is different in the Security Council, where the weight of the 5 Permanent members is preponderant on the account of the veto. This is because of historical reasons, at the time of the adoption of the UN Charter in San Francisco on June 26, 1945. But there is a new reality today. The balance of power has considerably changed. Hence, the reform of the Security Council is a necessity. The big 5 have over the years used the veto in a varying way, according to their strategic interests. They have not always acted in strict conformity with the provisions of the Charter. Sometimes, they act outside of it. NATO is an example.”

On Security Council reform: do you think the P5 would ever agree on one proposal, or is the status quo too advantageous for them to agree on reform? And if it was up to you, what past proposal would you push forward?

“Certain Countries find it advantageous to maintain the status quo within the Council. But they know that the times require innovation in the Council. It is overdue. In the long run, a regional formula is the most desirable. Why? It would be fair if each continent enjoyed the right of the veto. Reforms based on a regional basis would lead to a smaller Council.”

During the selection of the next Secretary General, we noticed some tension between the Security Council, that went ahead with its secretive straw poll method, and the President of the General Assembly who continues to ask for transparency. Do you think that Mogens Lykketoft has a chance or is this confrontation coming too early in the UN’s history?

“As long as the Council, indeed the UN, is not fundamentally restructured, all reforms will remain superficial, and the call for transparency will not constitute an essential factor. More transparency would satisfy the President of the General Assembly and the Civil Society. But this will not change the present reality which puts every candidate through the filter of the Permanent 5. I wonder why, in the election of a new Secretary General, no emphasis is put on the notion of an independent candidate, nor on a relatively young candidate, say between 35 and 45 years old?”

Can you briefly share what specific reforms must be taken to democratize and improve the function of the UN?

“The UN needs fundamental reforms in all its aspects to render it more effective. In particular, the Council has to be restructured. The General Assembly needs representation of Civil Society. The economic and social and trade sectors of the Organization should be consolidated in the age of globalization. The Secretariat needs to be overhauled.”

Can you describe the alleged deterioration of UN staff’s integrity, dedication and overall productivity throughout your years at the UN?

“Many staff of the UN are devoted and committed to the UN principles and objectives. At the same time, many are demoralized and discouraged by the internal policies of the Organization. This is especially true when it comes to the recruitment and promotion of the staff. The process has been politicized. Policies such as political recruitment, favoritism, and the practice of short contracts and mobility have created uncertainty and anxiety among the staff. This has impacted their work. The managers will deny this, but my direct experience tells me otherwise. I participated in the recruitment and promotion of staff, and I have witnessed the process firsthand. There is no doubt in my mind that new management policies are needed badly to redress the situation.”

Why do you see regional integration as the only way to create a better future? What are your thoughts on the Brexit and the conservative policies of the EU?

“Regional integration offers the best alternative. There’s less conflict and less tendencies to resort to war in an integrated region. In the long range, continents will unify or federate like the United States and Europe. The latter is still trying to build institutions for the European Union. It is a long process. It took the U.S. a civil war to unify. It is a complex process. But Africa, Asia, Latin America and the Middle East are already trying to establish the basis for the unifications of their respective continents. The Brexit is a transitional phase. Britain, if it keeps its union, will one day get back to the European Union. After all it was the conservative Prime Minister Margaret Thatcher who said: “When the European train leaves the European station, we will have no choice except to jump in.”

Pope Francis last September, at the General Assembly,  said that the UN is not yet perfect, but without the UN, the world maybe would not have existed anymore… Do you agree? Also, in writing your book, you reveled situations that came directly from your personal experience working for the UN. Do you still have any secrets that you felt you could not reveal in this book? And why?

“Yes, given my experience of 30 years as a UN official. And of close to a quarter-century under the roof of the United Nations, I have experienced, or know of many things that are not contained in my book, An Undiplomatic Look at the United Nations. One reason is because of limited space in the book. A more important reason is that some of the issues are of sensitive nature to reveal at this stage. For example, what was the position of some states during the discussions on the Rwanda genocide? And another one: who helped this junior young Italian man climb the UN professional ladder so fast to become one of the highest Officials of the United Nations?”