World Refugee Day: “We Must Uphold Our Common Humanity”

Yesterday, June 20, 2016 was World Refugee Day. A day to commemorate and draw attention to the unprecedented number of persons displaced by war and persecution, as well as their courageous actions in the midst of dangerous conflicts. A report released yesterday by the Office of the UN High Commissioner for Refugees (UNHCR), “Global Trends: Forced Displacement in 2015,” found that 65.3 million people were displaced at the end of 2015, 5 million more than the record set in 2014. This figure consists of 21.3 million refugees, 3.2 million asylum seekers, and 40.8 million people displaced within their own home countries.

This means that one in every 113 people on Earth falls into these displaced categories. Tragically, 51% of these refugees are children, traveling alone, or separated from their parents. Coming after the UNHCR’s report that 1.19 million people will be in need of resettlement in 2017, this new reading puts the international refugee crisis into greater perspective. 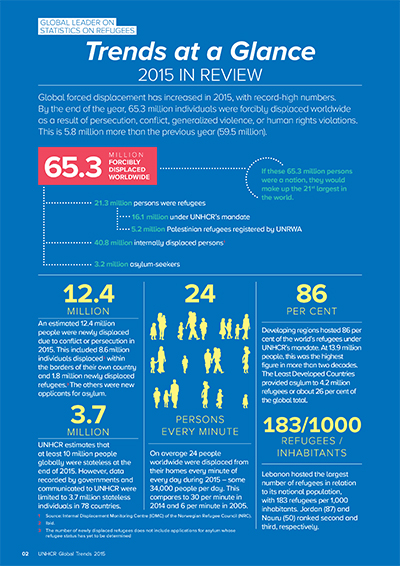 Half of the world’s refugees come from Syria, Afghanistan, and Somalia alone, countries all undergoing devastating turmoil, at 4.9 million, 2.7 million, and 1.1 million, respectively. Colombia was found to have the largest number of internally displaced persons (IDPs) at 6.9 million, while Syria and Iraq follow with 6.6 million and 4.4 million.

In his message UN Secretary General Ban Ki-moon said: “World Refugee Day is a moment for taking stock of the devastating impact of war and persecution on the lives of those forced to flee, and honoring their courage and resilience. It is also a moment for paying tribute to the communities and States that receive and host them, often in remote border regions affected by poverty, instability and underdevelopment, and beyond the gaze of international attention.” This message was just after Mr. Ban’s two-day visit to Lesbos, Greece where he spoke with Greek Prime Minister Alexis Tsipras, NGOs, volunteers, the media, and many refugees about their efforts as well as the much-needed effort of the international community to address this global crisis.

The Secretary General significantly points out that while enormous attention was given to Europe’s management of over one million refugees arriving across the Mediterranean last year, most of the world’s refugees, 86%, are living in low to middle-income countries. Turkey, for example, was the largest host country in 2015 with 2.5 million refugees. Additionally, Lebanon had the highest proportion of refugees to its population with approximately one refugee for every five Lebanese citizens.

UN High Commissioner for Refugees Filippo Grandi said in his statement that every year the UNHCR tries to find hope in their statistics, but “this year the hopeful signs are hard to find.” Grandi called attention to the humanitarian obstacles inhibiting the international community from helping the displaced at the level it should. He proclaimed that “against this [tragic crisis], divisive political rhetoric on asylum and migration issues, and disturbing levels of xenophobia, are together threatening the international agreements which protect those forced to flee war or persecution.”

Instead of “burden sharing,” he said, nations are closing their borders, and instead of political will, there is “political paralysis.” Grandi asserts that humanitarian organizations like his are the ones left to pick up the slack of nations, yet limited budgets keep them from meeting refugees’ needs.

Grandi, however, does not find the situation completely hopeless. The Commissioner sees this year as a “watershed moment for the refugee cause.” As numerous wars and conflicts unfold, the UNHCR feels “this must be a year to take collective responsibility and action.” The UNHCR’s report, he hopes, will force world leaders to coordinate and cooperate in order to meet the needs of refugees and confront the root issues causing this massive crisis.

In their statements today, both Grandi and Mr. Ban mentioned the international community’s opportunity to address this crisis in the UN General Assembly’s High-Level Meeting on September 9th concerning large population movements of refugees and migrants. According to the Secretary General, this meeting will “offer a historic opportunity to agree on a global compact, with a commitment towards collective action and greater shared responsibility for refugees at its core.”

President of the UN General Assembly Mogens Lykketoft also spoke  about the initiatives necessary to tackle the immensity of this world’s refugee crisis. Addressing the UNHCR’s report,  he said, “In truth, the numbers do little justice to the pain and trauma that this crisis is causing for individual women, men and children across our world. They fail to capture the hardship of those who flee and the fear of those who wait anxiously behind.”

Lykketoft firmly declared that greater international cooperation and responsibility is desperately needed and listed several issues that must be addressed on the road ahead: First, Mr. Lykketoft asserted that the international community must practice greater dedication to finding political solutions to the root conflicts. Second, the UN and other institutions must be given sufficient resources to fulfill their mandates and to address the needs of refugees and migrants. Third, the lack of education for the millions of displaced children must be remedied. Fourth, there should be more solidarity between and with hosting countries. Fifth, resettlement needs must be reviewed and addressed. Sixth, the international community must create safe, orderly and regular pathways for refugees fleeing war and persecution. Seventh, all nations must uphold humanitarian law. Finally, in the face of xenophobia and racist rhetoric, nations must change the public discourse and support tolerance, diversity, and equality.

Echoing the theme of Lykketoft’s previously mentioned comment about the UNHCR’s data, Monday in the visitors’ lobby of the UN was the opening event for Refugees, a multimedia exhibit meant to show that refugees are not just numbers, nor distant victims, but real, suffering people in desperate need of assistance. The exhibit consists of photographs taken of and by refugees in all regions of the world, videos of their situations, as well virtual reality videos that put you directly into the experiences of the refugees and migrants. The exhibit is not only meant to reflect on the victimhood of the refugees, but to show the hopes and potential contributions they will make and are making to the world as their needs are adequately met.

Mr. Ban Ki-moon spoke at the event, as well as Under-Secretary-General for Communications and Public Information Cristina Gallach, Representative of Jordan to the UN Dina Kawar, Director of the UNHCR office in New York Ninette Kelley, Director of the UN SDG Action Campaign Mitch Tomey, and Director of Global Development and Co-Founder of Shared Studios Michelle Moghtader, who helped put the exhibition together.

Recounting his recent visit to Lesbos, the Secretary General asserted that if Greece can respond to the refugee crisis with so much compassion, “surely others must do far more.”

“This responsibility must be shared across Europe and across the world.  More countries need to resettle more people. We need to crack down on smuggling, fight xenophobia and provide safe, legal and regular pathways,” he said.

Mr. Ban ended with words of hope and inspiration, evoking Commissioner Grandi’s belief that this year will be a “watershed moment for the refugee cause.” He said, “We must uphold our common humanity. It is there in all of us, waiting to be expressed.  Now is the time.”

Migrant Caravan: Does the Mainstream Media Think We Can’t Handle the Truth?

The Media’s Fake News Hysteria is Edging Us Toward Censorship

Brexit? Look Before You Leap

2018 Midterms: Searching for the Bigger Picture

Brexit? Look Before You Leap