On the magnificent island between Sicily and Africa, the story that bewitched me 50 years ago is handed down through the generations.

The "Arch of the Elephant" on Pantelleria

His name was Turi, and he was both a fisherman and a real estate broker. We met by chance on the morning of a windy February day, in 1965. We were standing alongside the bar of Tikkiriki, sipping espresso. Tikkiriki was a coffee bar, the only one open in those days on the harbor promenade of Pantelleria, a little-known island between Sicily and Africa.

In Pantelleria people were known by their nicknames, and Turi was called ‘Soraya’s Eyes’ for his unusual, intense blue eyes. “Are you a tourist?” he asked me, to start a conversation.

“What kind of work?”

“I am an architect,” I added,  “I have to photograph the island for an exhibition called “Italy To Be Saved.”

“But there is nothing to save here,” he replied, and with a hand gesture pointed to the squalid look of the harbor town, poorly rebuilt after the destruction of WWII.

“Yes,” I admitted, “but this island has plenty of splendid vernacular stone buildings, and its landscape, structured in overlapping terraces, is unique and magnificent. Ultimately, Pantelleria has a lot worth photographing.”

“Aah,” was his comment, “then, I can show you some of the island’s oldest Dammusi.”

This broke the ice and, for the following four days, Turi was my guide in the discovery of the island, its landscape and architecture. It was during my last day on the island that Turi asked me if I liked fish soup.

It followed that he invited me to dinner in a warehouse near the sea overlooking Cala Tramontana, a spectacular little bay on the North side of the island. To find this place I had to follow my nose, and the inebriating scent of fish that was coming from a particular stone building.

Once inside this lab of delicious aromas, I saw Turi bent over a huge black pot steaming on a wood stove. I soon realized that this warehouse was his hiding place and that Turi was also an excellent cook.

And he wasn’t alone.

That night, perhaps to please me, he had also invited two young women to dinner, a blonde with green eyes, a roundish face and a perpetual smile on her lips, and a tall brunette with a slim figure, dark eyes, and a resolute look. Both were attractive with an exotic look that made them even more interesting.

“Are you tourists?” I asked with limited originality.

“No,” answered the brunette “we are residents.”

“Applying?” I commented, “What does this mean?”

“Thanks to Turi,” explained the blonde, “we were able to purchase two Dammusi, and we are now looking to become residents of this island.”

I discovered that the blonde was Carmen, from Barcelona, while the brunette was from Malta, and her name was Melina. They had been living in Italy for a few years but after visiting Pantelleria, had fallen love with the island.

They had a good plan and while Turi was cooking, I listened to their stories. I wondered why on earth they had ended up buying properties on this island, an isolated atoll in the middle of the Mediterranean Sea.

Being an architect, our conversation turned to the peculiar characteristics of the local stone houses, and how they could be restored and adapted to serve a new purpose without compromising their architectural authenticity.

‘Soraya’s Eyes’ were encased in the face of a pirate. Looking at Turi in the twilight of this warehouse barely illuminated by the glare of two candles and the occasional dazzle of the wood fire stove, he reminded me of one of the powerful characters of a Salgari novel.

It turned out that Turi wasn’t just a cook, but a consummate storyteller. That night, he delighted us with various tales about the island. One in particular, deserves to be recalled.

“This was the house of the elephant,”  he started off,  “and this elephant belonged to Hannibal, when he started his campaign against Rome.”

I realized Turi was referring to the Punic Wars between Carthage and Rome and I couldn’t help interrupting him:

“What are you saying?” I objected, “Hannibal’s army reached Europe via Gibraltar, and crossed Spain and France before confronting the bulk of the Roman troops in Italy.”

“Right,” admitted Turi, “but this was before the Second Punic War.”

And he went on: “Hannibal was a great Carthaginian general and statesman, the son of the leading commander defeated by the Romans in the First Punic War. Having promised to avenge his father, Hannibal conceived a plan to attack Rome from the South, crossing the sea to land in Pantelleria, only 40 miles away from Carthage.

It was the year 220 B.C. and, although his plan made sense on paper, Hannibal wanted to test it,” Turi continued with a professorial tone.

“In those years, both Pantelleria and Sicily were Carthage’s territories, and it was easy for Hannibal to cross the 40 miles that separated his homeland from this island.  Ultimately, he crossed the sea with two vessels and landed at Cala Tramontana with his elephant, and a small contingent of soldiers.” 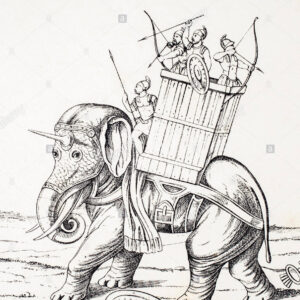 Turi was now speaking rapidly in an emotional tone.

“Why did Hannibal pick this Cala Tramontana when the Carthaginians had built a suitable port in the harbor town?” I asked.

“Hannibal picked this site because it featured the only fresh water source on the island, and because he could rapidly move his vessels from Cala Tramontana to Cala Levante in case of a storm,” he answered.

“In the harbor town he couldn’t have kept his elephant nearby, while here, on this saddle between two bays, he had enough room to organize his camp, dig a well, and build a cistern for the elephant.”

“Where did you get this story?” I could not refrain myself from asking.

“From Polybius,” he answered promptly, “the Greek historian who wrote the history of the Punic Wars!”

None of us dared to contradict him.

“And then,” he added, “this story has been confirmed by my grandfather!”

“How did your grandfather know? I don’t think he had read Polybius in Greek.”

“He had been told by his grandfather,” was Turi’s answer!

The fish soup was delicious and blended gracefully with the local wine. Turi was a fascinating storyteller and the guests were so inebriated by the atmosphere, the food, the wine, and the intriguing nature of the story, as to not question the word of our host’s ancestors.

That night, I had an epic dream. I dreamed that Hannibal had landed in Pantelleria in reconnaissance, with l’Ele, his elephant, and an armed escort, and he had set up headquarters in Turi’s warehouse at Cala Tramontana. The island was infested with Roman spies, and Hannibal’s arrival had caused great concern. A spy reported his presence to Marcus Valerius Laevinus, Rome’s acting Consul at that time.

Marcus Valerius Laevinus had an excellent relationship with Zeus and, on this occasion, he asked for Zeus’ help in neutralizing Hannibal.

Zeus wasn’t only the God of Fire but also a protector of Pantelleria, where he was managing 52 active volcanoes. Zeus didn’t need much persuasion to concur that Hannibal had to be taught a lesson. He consulted with Prometheus and Hephaestus and they decided to hit Hannibal where it would hurt him most, striking his beloved elephant with a powerful bolt of lightning.

While l’Ele was peacefully strolling along the path that borders the sea in Cala Levante, ignorant of the god’s conspiracy, Zeus hit him with such a powerful bolt of lightning that the pachyderm was instantly transformed into a smoking lava sculpture. Ultimately, l’Ele collapsed into the sea but since the sea in that particular location wasn’t deep, the elephant couldn’t sink completely, leaving his head and trunk to emerge from the water, as we can still see today.

I woke up devastated by Zeus’ viciousness, and couldn’t return to sleep. That morning I was supposed to leave the island, but the presence of my two new female friends was the incentive to remain a little longer.  I concluded that I needed to consult with them, and we agreed to meet for lunch at a small fishermen’s restaurant by the sea, below the village of Scauri.

I recounted my dream and they both looked puzzled.

“This is a propitious dream,” exclaimed Carmen, “it seems to suggest something.”

“It is very clear,” added Melina, “it suggests that you have a mission to accomplish, and, in my opinion, this mission is to keep alive the legend of the elephant.”

I concluded that the best way to avenge Zeus’ wrongdoing was to purchase Turi’s warehouse and make it live again as “The House of the Elephant”.

Fifty years have now passed from that night and, although the memory of Turi’s story and my dream have been altered by my fantasy, my determination has not, and I have never stopped restoring, repairing, and rebuilding the House of the Elephant, making it more intriguing and strikingly beautiful with the passing of time.

Pantelleria, the Island Where You Can Try to Discover the Secret of Immortality

Art, Love and Creativity: The Magic of Pantelleria Island

COVID-19 and Economy: the Pandemic is Worsening Poverty and Inequality