Right after their last exchange of messages he hanged himself

When celebrity chef Anthony Bourdain died by suicide on June 8, 2018, no one saw it coming. Known as the bad boy of the culinary world, his take on life was sharp and edgy. From the time that he published his first book, Kitchen Confidential (2000), Bourdain pulled no punches; not about his own life and the bad decisions he had made, and not about the people and places that he wrote about. Clearly, he was “deep”. In an article in The New Yorker, he was described as, “a television megastar, a fluid and conversational writer, a social-media gadfly, a pointed cultural commentator, and seemingly everyone’s best friend.”

Already in 2019, about a year after Bourdain’s death, the documentary filmmaker Morgan Neville began talking to people who had been close to Bourdain: his family, his friends, the producers and crew of his television series. “These were the hardest interviews I’ve ever done, hands down,” he told me. “I was the grief counsellor, who showed up to talk to everybody.” The documentary, “Roadrunner: A Film About Anthony Bourdain,” was released in 2021.

Four years after the suicide, people are still speculating about what made him end his life. Now, a new unauthorized biography of Anthony Bourdain, which for the first time includes the celebrity chef’s text messages from the days leading up to his death, reveals the depth of his anguish over his career, his estranged marriage and his troubled romantic relationship with actor Asia Argento. 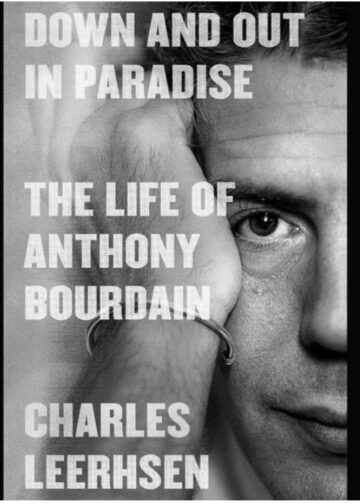 Selections from the book Down and Out in Paradise: The Life of Anthony Bourdain, written by journalist Charles Leerhsen, were published on September 27 in The New York Times and the Simon & Schuster book will be released on Oct. 11.

“I hate my fans, too. I hate being famous. I hate my job,” Bourdain wrote to his estranged wife Ottavia Busia-Bourdain, with whom he maintained a close relationship even after their separation in 2016. “I am lonely and living in constant uncertainty.”

Although the article doesn’t specifically say that Busia-Bourdain provided the texts, Bourdain’s widow controls his estate, which includes the messages.

Perhaps most revealing of Bourdain’s troubled state of mind when he took his life were the exchanges with Argento. Leerhsen’s book chronicles the couple’s turbulent relationship, with both sides expressing unhappiness at social media photos that depicted each with another partner: Bourdain spending time with his estranged wife and daughter, and Argento dancing with a French reporter in the lobby of Rome’s Hotel de Russie, and later, kissing him.

“I am okay,” Bourdain texted Argento after seeing the photo. “I am not spiteful. I am not jealous that you have been with another man. I do not own you. You are free. As I said. As I promised. As I truly meant. But you were careless. You were reckless with my heart. My life.”

According to the Times’ description of the book’s content, Bourdain then wrote that he was hurt that “the tryst” took place in a hotel they had previously enjoyed together. Argento responded, “I can’t take this,” and said she wanted to break their relationship due to his possessiveness.

In his final exchange with Argento, Bourdain wrote, “Is there anything I can do?” to which she replied, “Stop busting my balls.” The celebrity food writer and traveler responded with a simple, “OK,” and then hanged himself later on that same day.

As the Times writes, the book has “already drawn fire from Mr. Bourdain’s family, former co-workers and closest friends,” with brother Christopher Bourdain sending Simon & Schuster two emails in August calling the book “hurtful and defamatory fiction.” The publisher responded, “With all due respect, we disagree that the material in the Book contains defamatory information, and we stand by our forthcoming publication.”

In an email to the Times, Argento wrote that she had not read the book, adding “I wrote clearly to [Leerhsen] that he could not publish anything I said to him.”

Perhaps Bourdain was too deep and restless for his own good, and his search for the happiness that remained elusive to the end led him from one thing to the next. But as he himself is heard to say in Neville’s 2021 documentary’s first few minutes, “There’s no happy ending.”

In the new book, Down and Out in Paradise: The Life of Anthony Bourdain, Leerhsen tries to find out why.

Harry and Meghan Invite Netflix into Their Most Intimate Moments for $$$

Scientific Technology Can Dim the Sun to Cool the Earth, but at What Price?

In the Wake of Protests, Iran Abolishes Morality Police