The Inadvertent Sexualization of Children and the Perils of the Internet

Today the overt sexualization of children is pervasive and impossible to escape. We need to take our parenting role seriously 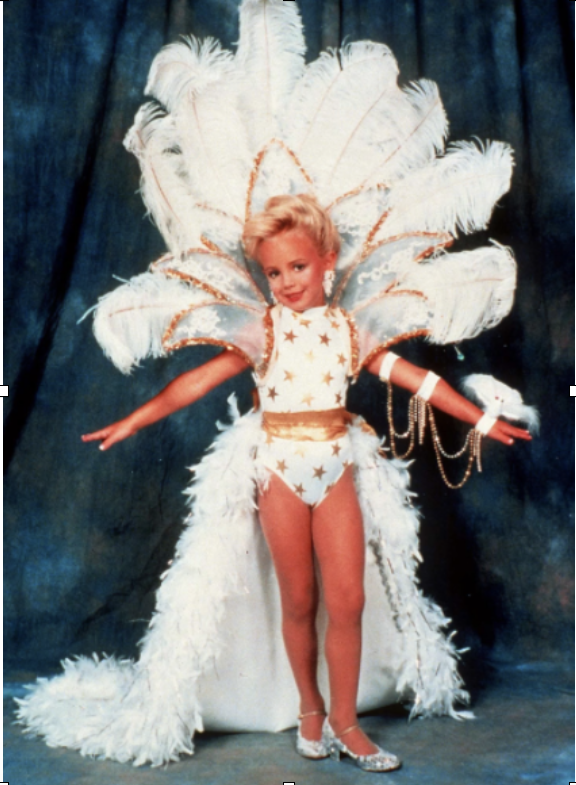 For days after JonBenet Ramsey was found murdered in 1996, America watched in fascination at  the images of a 5 year old girl decked out as a mini-show girl, wearing full make-up and “big hair”, as she strutted her stuff, dancing and singing across the stage of a beauty pageant. Unfortunately the tragic murder of this young victim brought the sexualization of childhood into the spotlight and started a debate that has become ever more relevant with the spread of the internet, rife with voyeurs, lurkers, stalkers, potential molesters and pedophiles. These mentally unbalanced  people are  a danger to our children. Are we inadvertently enabling them by sexualizing our children at a young age?

The American Psychological Association has stated that “girls get this message repeatedly: What matters is how ‘hot’ they look. It plays on TV and across the Internet. You hear it in song lyrics and music videos. You see it in movies, electronic games, and clothing stores. It’s a powerful message.” In short, in America, and in the Western World for that matter, the overt sexualization of children is pervasive, and impossible to escape. It is everywhere, it goes on day in, day out, 24/7, fueled no doubt, by our worship of celebrities, who set the tone.

Even minor celebrities, wannabe reality “stars” and non-celebrities with name recognition have a disproportional influence on us and our children. U.K. businesswoman and former model Katie Price  posted a picture of  her 8-year-old daughter, Princess, wearing heavy makeup and posing provocatively.

When criticized by the few who questioned the wisdom of allowing an 8 year old to imitate the Kardashians, and to become a real life “Barbie clone,” not only did Price aggressively counterattack against the critics, but Princess herself fired back in an Instagram video with, “By the way, I want to do my makeup, not my mum. I do. And anyway, it’s none of your beeswax! So oosh!”

Another mother who admitted to  letting her 3 year old “play with makeup” defends her choice by declaring that if her daughter is going through a phase then she is happy to let her “test the waters” to find out what her lifelong fondness will be. While playing with makeup is a normal part of imaginative childhood play and we’re all for it, the idea that a 3 year old can test the waters of a “lifelong fondness” seems highly dubious.  What’s more, posting provocative images of  the made-up children introduces another level of risk.

Fathers, on the other hand, frequently voice disappointment that the mother has allowed their 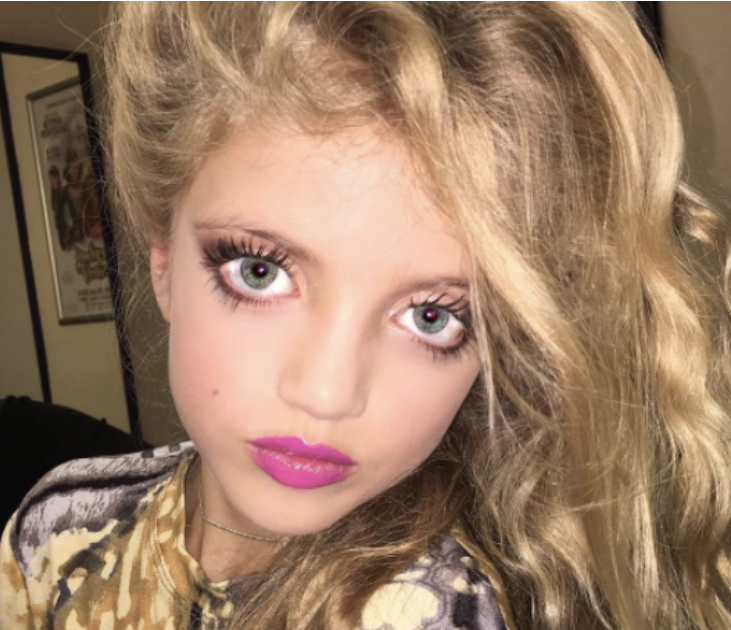 young daughter to grow up too fast. In one extended article a father deplores the fact that his “darling girl was being allowed, no encouraged, to behave like a tiny Lolita,” and wonders, “Where’s the cute in that?”. He confesses that as the only man in a female-dominated household, when similar disputes arise, he frequently caves in because “the girls join forces with their mother against me.” Yet he deemed this issue to be so crucial that for once, he dug his heels in.

In our ongoing struggles against patriarchal abuses, we are used to blaming men for sexualizing women, but in cases involving young and very young girls, we have to wonder whether the mother’s desire to re-live and glamorize her own childhood plays a role in  pushing the young girl to cross boundaries that are dangerous to cross.  A central part of the JonBenet Ramsey murder narrative revolved around the issue of responsibility. Had the parents, principally the mother, exposed the child to unhealthy attention?  The irony is that the criticism served to draw more attention to the glamorous world of children’s beauty pageants, and according to some experts, spawned numerous copycat television programs, such as “Toddlers and Tiaras,” that not only exploited the glamorization of children, but radically changed pop culture in this regard, normalizing to an extent what used to be considered an aberration.

Results from polls usually show that respondents feel strongly that children should not be sexualized.  And yet we cannot ignore that in beauty salons everywhere in America, that is, is in your neighborhood and mine, little girls as young as 3 or 4 are getting the same beauty treatments and services as their mothers: manicures, pedicures, hair straightening, highlights, even facials.  “But it’s not just Tinseltown’s tots. Little girls everywhere are buffing, plucking and even waxing!” Lois, the child getting a hair blow-out in the photo, is 5 years old. 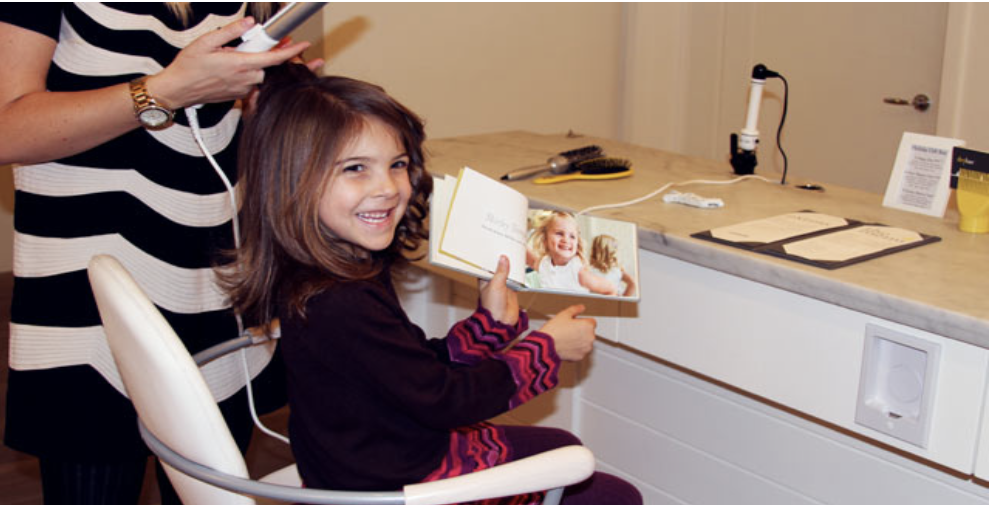 So what is to be done? Interested in getting another perspective on the question, I interviewed some young women. One of these, the most vocal of the group, assured us in no uncertain terms that the answer is that nothing is to be done. According to her there is nothing wrong with sexualizing children because “sexuality,” like beauty, is in the eyes of the beholder. Ironically this highlights the problem: that there are many people, mentally unstable or not, who do consider a 5 year old sexual prey when she is presented in that way.

If we lived in a perfect world we could confidently express ourselves without risk. But we don’t live in a perfect world and our decisions carry real-life consequences, sometimes tragic ones. It is idealistic to think that because today as a woman, you have the right to do whatever you want with your body–as many of my young women friends claim—you should go ahead and do it to prove the point. It is even worse to think that you should allow your child to cross the boundary of premature sexuality. The American Psychological Association offers some advice on this issue. It states, “As parents, you are powerful too. You can teach girls to value themselves for who they are, rather than how they look. You can teach boys to value girls as friends, sisters, and girlfriends, rather than as sexual objects…” This kind of vague and vapid advice fails to instill any confidence in me. I’d rather hear that a 3 or 5 year old is a child who should be protected by responsible parents who are not afraid to make the tough decisions. In this confusing age when children are exposed to overt and ubiquitous sexual messages, we need to take our parenting role seriously and not cave in when pressure, whether from peers, celebrities or advertising, drags our children towards premature adulthood. Let’s not inadvertently invite pedophiles and sexual perverts to victimize our children.

Kenny Dunn: the Founder and Ceo of “Eating Europe” Tours

Kenny Dunn: the Founder and Ceo of "Eating Europe" Tours