Justice Clarence Thomas wrote that it may be time to treat social media platforms as common carriers. How much change will occur?

There is plenty of interest in Thomas’s concurring opinion to the order directing the Second Circuit to dismiss the Trump Twitter blocks case as moot. Justice Thomas wrote that it may be time to treat social media platforms as common carriers.

“…our legal system and its British predecessor have long subjected certain businesses, known as common carriers, to special regulations, including a requirement to serve all comers.”

This case has been under the social spotlight from the time of its filing. The facts of the case are fairly simple and linear. Seven private Twitter users were blocked after they criticized then-President Trump on the platform. For the uninitiated, this means that when those users went on to the Twitter online platform, they could not social media see the President’s tweets (if they were logged into Twitter) and under no circumstances could they reply to retweet President Trump. So those seven Twitter users sued, joined by the Knight First Amendment Institute, which is part of Columbia University in New York.

Private citizen Donald J. Trump set up his Twitter account in March 2009 and brought it with him to the White House, where it became his most infamous way to send messages to his constituents and the world. Unlike any other President in American history, President Trump regularly used the Twitter platform to make policy, discipline personnel, share his opinion on political and entirely non-political issues, and, once he lost the 2020 election, communicate often popular, yet entirely unfounded claims of election fraud.

The Second Circuit Court of Appeals ruled that a Twitter or other social media account run by government officials can become a constitutionally protected “public forum” if used to conduct official business. The Supreme Court had earlier ruled that the views of any speaker may not be discriminated against in a public forum, whether in person or online. 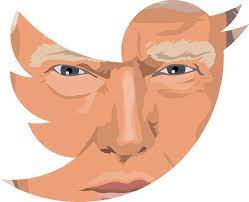 Of course, when President Trump left office in January, the case lost all of its practical impact, the final nail in this online coffin being Twitter’s decision in early January to permanently ban former President Trump for glorifying violence.

Anthony J. Vecchio, a New Jersey-based lawyer, observed that the concurring opinion of Justice Thomas may prove even more important than we imagine today.

“If it becomes the stated position of the Supreme Court that Internet messaging platforms such as Twitter should be treated like phone companies or similar utilities, where does this actually stop? This week’s concurring opinion may very well be opening a door few realistically expected to have opened.”

There is an argument to be made here that the 6-3 majority conservative Supreme Court should express more directly what it really means: That they want to support conditions in which the federal government (and, practically, GOP politicos) is able to force private companies such as Twitter to communicate their public messages.

Historians may argue that Justice Thomas is misapplying the law of common carries and the relevant laws that govern public accommodations. Common carriers are duty-bound to serve travelers who are especially vulnerable precisely because they are away from home. Applying this to Silicon Valley social media behemoths may be a stretch.

Skeptics may also say that this is Justice Thomas signaling to lawyers what kind of lawsuits to file. It also might be a sign of inconsistency, given the majority opinion he joined in Boy Scouts of America v. Dale? Again, there might be a rational argument that the only difference between the cases is that Twitter has far more members than the Boy Scouts.

The Supreme Court Agrees to Determine the Future of Abortion