Covid-19 Pandemic, Racism and Riots: Is God Asleep at the Switch Or is He Angry?

Ours is a nation that not only allows for religious expression, but it encourages it. But religion needs to be practiced responsibly

If God is not asleep at the switch, is He simply ticked-off at the world? We have a pandemic going on. Unarmed black men are being killed with painful frequency. Racism seems to be still rampant in our country. Peaceful demonstrators are being joined by some of the dregs of our society thus marring the effectiveness of their rightful protest. I haven’t even mentioned world hunger, armed conflict, refugees, and politicians.  Is Coronavirus a way of God showing displeasure with our world? And where is God in this entire mess?

I am a Christian clergy of over 50 years and have often experienced troubled times in our country. I also do not believe that God is asleep at the switch or vindictive. Disappointed at what is currently happening, yes, but behind it, no. The God of most, if not all, of our major religions both wishes for and seeks the best for humankind. I know that my Christian God demonstrated the depth of his love for all by hanging from a cross.

Ours is a nation that not only allows for religious expression but also encourages it. Churches and other religious institutions are not taxed.  This is just one example of the positive light in which our society favors religion. We have freedom of religion, and the religious are encouraged to be responsible and contributing members of our society. The church is not intended to be a fortress to protect people from the world but rather a launching pad to propel people into the world. 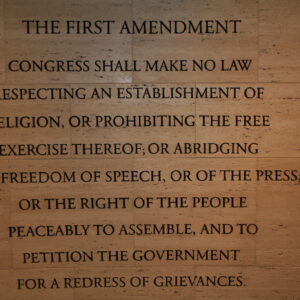 This is why most religions have programs to feed the poor, provide for the homeless, establish hospitals and nursing homes, and have numerous other ways to benefit society.  Their faith both teaches and encourages such behavior. Adherents of religion are encouraged to speak out against injustice and work towards a society in which black lives matter as much as all lives.

Politicians seeking support of believers, often try to pander to Christians. They act religious when they may be marginal at best in their beliefs and practices. Using the church as a set and the Bible as a prop trivializes and demeans Christianity.  Politicians who are actively engaged in their church can well set a positive example for the faithful. Then they have gravitas when they speak of their faith publicly.

In the town in which I reside, our streets are never cleaner and our public spaces never look better than in the Fall of the election year of our town officials. Politicians seem to quote the Bible more, talk about prayer, and say, “God bless America” increasingly during an election year. They are using religion to their benefit rather than encouraging the use of religion to benefit their followers and our society.

Several years ago, I published an article titled, “Religion is an Important Part of Public Education.” In it, I argued that the law does not prohibit the study of religion in our public schools but the promotion of one religion over another. The teacher should not and cannot evangelize students to her/his brand of faith but could encourage religious feelings and expression. Granted, this is hard to regulate, but by ignoring religion all together in public education, suggests that it is unimportant and perhaps even harmful

It is difficult for most people to look at the many wonders of nature and not to feel a sense of awe. The miracle of birth is perhaps the time that most experience the hand of God at work. As humans, I strongly believe that our lives are enhanced by religious belief. Now I know that many horrible things have been done in the name of religion. But this is the bastardization of the teachings of most major religions and abhorrent to God.

In the Bible, the words, “Fear not,” in one form or another, are found more than 365 times … one for each day of the year.  In our current society, fear of the future abounds. After he rose from the dead, Jesus appeared to his disciples, who locked themselves in a room for fear of the authorities. Jesus said to them, “Peace be with you.”   Christianity and other world religions teach the need for all of us to seek internal peace for ourselves. Perhaps even more strongly, Christians are commanded to become workers for peace in our society. We are one in the body of Christ not severed pieces merely struggling for our own survival. We have been blessed by God to be a blessing for others.

The axiom not to discuss politics or religion is a boundary to which religions should not adhere.  Particularly in this election year, it becomes imperative to be discussing which of the candidates might best lead our country. This is a time of so much divisiveness and hurt. We do not seek to become a Christian theocracy but an active part of the electorate which will participate fully in the political process. In every aspect of our society, the religious are called to participate and become leaders in bringing peace and healing to our fractured world. Yes, there should be separation of church and state. One is not permitted to dominate the other. Yet, both are called upon by God to benefit the world.

So, is God currently asleep or angry at the world?  I do not think so. Upset, probably. Hopeful, always. Willing to help make things better through us, for sure. We are not called to be successful but to be obedient and faithful. We should always put off until tomorrow what we should not do in the first place. But the constructive things that we can do today, we cannot afford to put off. Lincoln’s famous quote of seeking the angels of our better nature is currently needed in abundance. And as Doctor Martin Luther King Junior encouraged, we all need to feel the fierce urgency of now. This is no time for apathy or complacency.

Covid-19 Pandemic, Racism and Riots: Is God Asleep at the Switch Or is He Angry?