All these young people’s efforts, as usual when it comes to government’s protests, will be all for naught.

March 24, 2018, my wife, 76 years old, helped by a cane and I, 80, attended the rally “The March For Our Lives,” and walked the entire trek in New York City, from 86th Street and Central Park West to 6th Avenue and 44th to express our solidarity with the young student survivors of Parkland’s Florida High School.  The march was composed of old as well as young people; lots of children companied by their parents; these were mostly young families; and they were in the thousands. It was apparent also that this rally was not organized by groups who had social or political aims in mind; nor were they organized by those exhibiting professionally composed placards or marching bands. Their music was produced literally with pots and pans, and their placards were hand made. This crowd was well behaved, and only at times did they loudly voice their anger against a variety of agencies, or personalities such as President Trump, but mostly chanted “Stop Gun Violence,” or, “ Protect Our Children not Guns”, among many others. The real culprit was the NRA  (National Rifle Association) president whose face was altered to resemble what the writing on the placard described as “The Real Face of Evil.”

After more than 5 hours of marching and chanting slogans, at the end of the rally my wife said to me: “We did a good thing today [by marching in solidarity of school children in peril of facing gun violence while in their schools].”  “Yes” I responded, “we did a good thing today.” But while I was saying this, I could not hide the pessimistic feeling I had in me, knowing that all these young people’s efforts, as usual when it comes to government’s protests, will be all for naught. I heard on the news that The White House had emitted a bulletin, which sounded like it was “congratulating the young people for expressing their right to protest.” How hypocritical, and yet at the same time, how dismissive.

If memory serves me still, I remember reading When the World Outlawed War. (David Swanson, 2011) about the Peace Movement rallies after WWI, which put up such massive protests in almost every country on Earth, that the most belligerent nations such as England, Germany, France, Italy and the United States, to placate the world-wide uproar, signed a Treaty of Paris on August 28, 1928:…“Solemnly declaring, in the name of the people they represented to condemn recourse to wars for the solution of international controversies.”  On January 15, 1929, The US Congress voted 81 to 1 in favor, ratifying the treaty into law (The Kellogg-Briand Law). In contrast to this utmost peace treaty that would have banned wars altogether in the world, today’s national rally to ban guns seems to be miniscule in comparison to that of outlawing war altogether from the face of the earth. Yet, what happened? The US, ignoring that law of 1929, for whatever reason, still initiates or responds to war situations in which highly lethal weapons are used; and American soldiers are killed.

I am pessimistic about the idea that this national rally against gun violence will resolve the problem at hand. In my long years of living now, I have come to believe, unfortunately and tragically, that the real enemy of the people, despite the fact that it was the people who created governments to protect their lives, their possessions and country, it is now the governments themselves and their leaders, having fallen to the hands of powerful interests, have become the real and worst enemy of the people; and this, not just here in the United States, but everywhere else on this Earth of ours. Any wonder why the NRA itself does not trust its own government? They insist that if they give their own government an inch, it will eventually take away a whole yard from them? 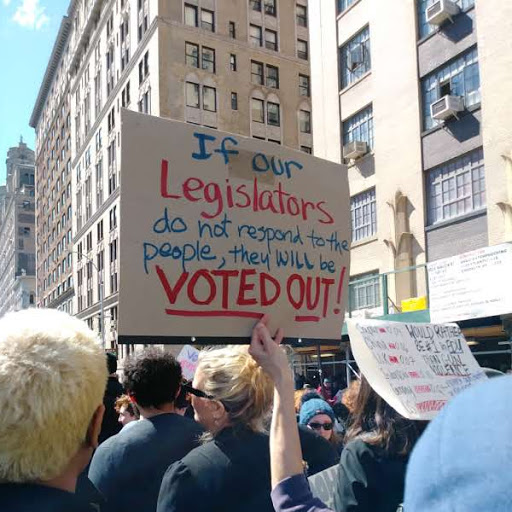 Why do people from all over the world hate us showing it with terroristic tactics?  Is it because we are rich? Or rather, isn’t it because we interfere with their political and economic realities in their countries?  Since when has the people of the United States given those who are hungry for power, or corrupted officials the right to enrich themselves, and to place our country in continuous and ever increasing peril?

Did Afghan Pres. Ghani Show Weakness or Strength in Ceding the Government?

Love Thy Brother and Sister… and Judas!

Our Minute in New York: March for Our Lives

The US at a Crossroad. Will it Cross its Rubicon, or Choose Democracy?

Our Minute in New York: March for Our Lives