Cristiana Pegoraro at Carnegie Hall Nov.16: “A Concert for Justice and Peace”

Cristiana Pegoraro, the world renowned Italian pianist and composer, will be back in Carnegie Hall on Wednesday, November 16 for the first time after the COVID-19 pandemic. This special concert is already sold out. Acclaimed as one of the most gifted musicians of her generation, Pegoraro has performed at some of the world’s most prestigious venues: Carnegie Hall, Lincoln Center, the Sydney Opera House, Teatro alla Scala in Milan and the Royal College of Music in London, to name a few.

We spoke to Ms. Pegoraro to ask her a few questions about her performances and her artistic vision.

Tomorrow night’s concert is called “A Concert for Justice and Peace.”  How important is it for you to make music that has a greater meaning, as in this case?

” It is extremely important and I believe that we, as artists, should do much more in this regard. First, because when we are on stage the audience listens to our music and our words. Music sends a message of beauty, so combining it with an important message comes almost natural. Nowadays the world needs to hear more messages of peace, justice and love. As an artist, I always try to be a spokeswoman for these type of messages.”

How will the concert be structured?

“The first part will be dedicated to some Italian composers such as Vivaldi and Rossini; then to great composers like Beethoven and Chopin. So the first part is more classic. In the second part I will receive an award from the Municipality of Terni, my hometown, as I have been nominated Saint Valentine Ambassador in the world. Tomorrow’s concert will mark the start of the initiative to raise awareness on the role of Saint Valentine, the saint of love. I am particularly fond of this project as Saint Valentine was born in Terni and was a bishop there. At the concert, I will present a piece that I played in Saint Valentines Basilica, called Colors of Love, that will be accessible through a QR code.

After this, I will play a set of my compositions called “Ithaka: The Journey of a Modern Ulysses” that is dedicated to the journey of humanity through life.” 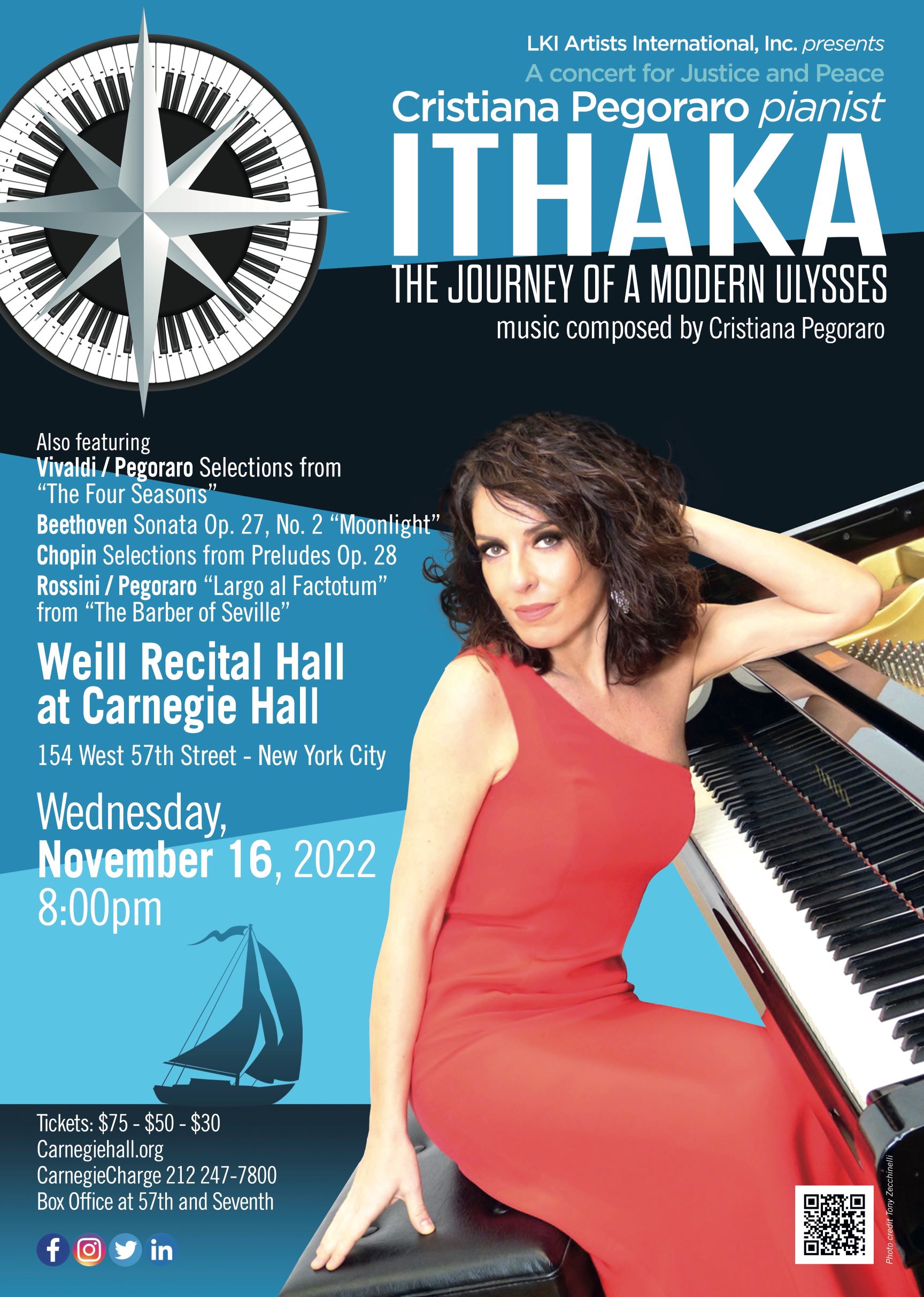 I understand that Ithaka is inspired by the  homonymous poem by Constantin Kavafis. Do you have a special connection with this poem?

“I discovered this poem when I was travelling for work in Greece and sailing in the Aegean Sea. Knowing Greece, I am very attracted to their culture which is closely united with all the other Mediterranean cultures. With this poem it was simply love at first sight. It has an important conclusion: making it to Ithaka is not what matters, it’s rather what you learned along the journey. Discovery and knowledge are fundamental processes in order to enrich our souls. I took inspiration from this poem and wrote compositions that makes sense, with sound, of what Kavafis explains through words. I wrote one song for each paragraph of the poem. Departure, love, decision, knowledge to reach wisdom, are all symbolized in the compositions. Wisdom will be the final phase as  when we will arrive in Ithaka, we will have understood what Ithaka stands for, as we will have acquired knowledge on the journey of life.”

How many pieces are they?

There are five. Sailing Away: the departure; The Wind and the Sea: the expectation and the choice; Summer Morning: the discovery and the knowledge; The Infinite: the journey and understanding and Now I Know: the wisdom.”

Do you often take inspiration from the other arts or from literature to compose your music?

“Yes, I take inspiration from literature, but mostly from life.  When I compose I release all the emotions that I amass in my daily life. I am lucky because I had a life full of emotions, and fulfilling experiences. The more we, as human beings, live life, the more enriched we become.”

How do the selections for the first part of the concert, such as Chopin’s and Vivaldi’s,  relate with the metaphor of Ithaka?

“They are different, as in a concert I like to explore different thematics and composers. For Vivaldi and Rossini I will play my transcriptions for the piano. Plus, I like to promote Italian culture in the world. And for Beethoven and Chopin, the former is my favorite composer and the latter is my first love.”

You talked about how the Aegean Sea somehow unites the Mediterranean people. Do you have any initiates, through your art, to promote that unity?

“This is the objective of Ithaka. I will also bring this musical project in theatres in the Mediterranean countries. The Mediterranean needs to be seen and rediscovered as a sea that has allowed different cultures to meet and to intertwine. Historically, it did not create  barriers; on the contrary it promoted multicultural exchanges. I want to launch a message of hospitality for new cultures as a way to open our hearts to differences.”

You have performed on some of the most prestigious stages in the world, but how does it feel to come back to the Carnegie Hall?

“It’s always a big achievement to play on this stage, but it almost feels like going back home. It is now a while that I live in New York and I have often performed  there. The audience is very unique and welcoming, the room is fabulous. Every time I have to play at the Carnegie Hall I am very happy.”

Born and raised in Florence, Italy. After graduating in the United Kingdom with a BA in History and Politics, she is now pursuing a Master's degree in Journalism at Columbia University in New York. Her interests range from politics to social issues and metro reporting.