Garden City, Long Island, to Chop Down 1,000 Trees Due to Infestation

Garden City, is a Long Island village in Nassau County that is very appropriately named, thanks to  entire neighborhoods lined with tall, stately trees. On sunny days, you can walk or drive through the dappled shade and enjoy the peaceful scenery. You can almost feel that you’re in the country, despite the fact that Roosevelt Field Mall is just around the corner. Unfortunately, thanks to an infestation of the emerald ash beetle, an invasive species, the look of the village is going to change.

The Village of Garden City will be removing hundreds of ash trees from streets around the village because there is no way to save them. They are suffering from an invasion of the emerald ash boring beetle – a small Asian beetle that burrows into the trees. It lays its eggs under the bark, and the larval beetles damage the tree, eventually killing it. There is no effective pesticide that can remove emerald ash borers — the best way to prevent their spread is to cut down the infected trees.

“We’re going to remove all the ash trees that are invested with the beetle, and right now that’s the majority of the trees,” said Paul Blake, chairman of Board of Commissioners of Cultural and Recreational Affairs for the village. “Once they get into the tree, it’s over.”

Ash trees are common around the village. You can identify them by the distinctive diamond-shaped patterns in the tree’s rough bark. They grow tall, and are popularly planted curbside in many areas. The village is currently looking to remove trees on Washington Avenue, Nassau Boulevard, Franklin Avenue, Clinton Road, Main Avenue and Meadow Street.

Originally, Blake thought the village would have to chop down 200 to 500 trees. After examining trees and seeing the extent of the infestation, that number may now be closer to 1,000. 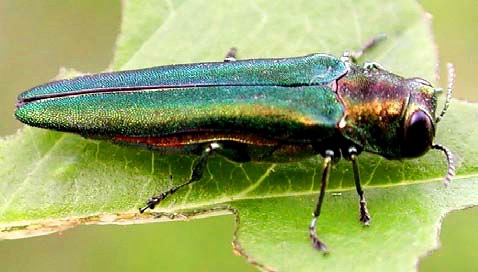 By chopping down trees infected with the beetle, Blake hopes the village will be able to save the healthy trees. According to the state Department of Environmental Conservation, emerald ash borers typically only move about a half mile from where they’re born. So, removing infected trees can stop the spread of the insect.

“Once you see your tree starting to decline, it’s unfortunately too late,” said Wernet. “It means the beetle has already attacked and is starting to kill the tree.”

The majority of the trees the village will be removing are located curbside, and there are also some on other village properties that will have to go. Blake said it could take one or two years to remove all the trees. While village crews can take down smaller trees, the village needs to contract out for the removal of large ones.

When the village does the work, it will also remove the trees and returning the ground to normal. Due to the insect infestation, the village won’t be able to use the wood for anything. The trees will be chipped, and the wood buried to prevent the spreading of the beetles.

Additionally, Blake said that the village will plant new trees. For every tree the village chops down, it will plant two. Those new ones, however, will be much smaller than the trees they’re replacing.