When the VMF was reconstituted, the organization resumed the tradition of bestowing the VM Award to an activist who embodies Marcantonio’s legacy

Yesterday the Vito Marcantonio Forum presented the 5th Annual Vito Marcantonio Awards to the 27th Manhattan Borough President, Gale Brewer at a luncheon. At the event, which took place at Gaetana’s Cucina on Christopher Street, Brewer said, “This is a great honor because Marcantonio is a hero of mine…”. As one member regaled the crowd of 40 stalwart members and supporters, she added: “I could listen to stories and anecdotes about him all day.”

When the VMF was reconstituted in 2011, the organization resumed the tradition of bestowing the Vito Marcantonio Award to an activist who best embodies Marcantonio’s political legacy; so this year Manhattan Borough President Gale Brewer was honored.

Since she took office five years ago, Brewer has passed legislation to add caregivers to the city’s anti-discrimination law, remove criminal history questions from initial employment applications (the Fair Chance Act) and enforced the requirement for street numbers to appear on buildings in Manhattan (to better aid emergency workers).

Last year, Brewer served as Chair of the Large Cities Council of the National League of Cities (NLC), and was named a member of the 2019 Human Development federal advocacy committee, which advocates for social services, children and learning, poverty and income support, employment and workforce development, equal opportunity, Social Security and seniors, individuals with disabilities, public health care, mental health parity and immigration reform. Brewer previously served on the City Council for 12 years as the founding chair of the Technology Committee and lead the Government Operations Committee. While there, the Council passed legislation guaranteeing paid sick leave for most hourly employees, requiring that all City data be published online, and protecting domestic workers from abusive practices. Brewer holds a Master of Public Administration from Harvard’s Kennedy School of Government and completed her undergraduate work at Columbia University and Bennington College. 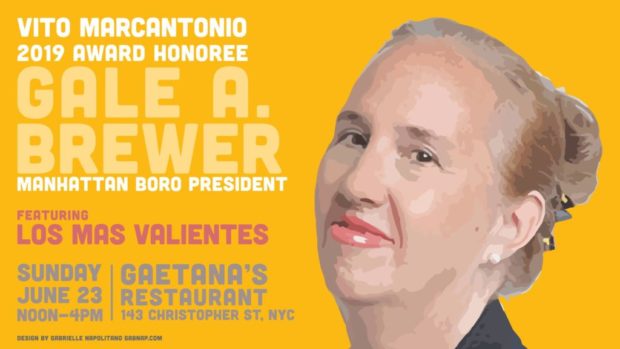 Yesterday’s program was dedicated to the late Gil Fagiani, a co-founder of the VMF and one of its most energetic members. He passed away on April 12, 2018 – coincidentally on the anniversary of  FDR’s death.  Fagiani is buried at Historic Woodlawn Cemetery in the Bronx between his two heroes – Vito Marcantonio and Fiorello La Guardia.

While the VMF is an educational organization, it has always woven cultural activities within its message, as our core members include scholars such as Dr. Gerald Meyer, author of Vito Marcantonio Radical Politician, 1902-1954, who has steadfastly guided the VMF and cultural workers who are creative and dedicated; such as graphic artist Gabby Napolitano who designs the awards posters.

Recently, the VMF  worked as Associate Producer of the one-man drama The Purgatory Trial of Vito Marcantonio, and a dramatic staged reading of Waiting for Lefty. Additionally, the VMF has hosted screenings of Oliver Stone’s,  The Untold History of the United States, as well as Gianfranco Norelli’s Pane Amaro, at the NYPL Mulberry St. branch. Entertaining the crowd was the Latin jazz quartet, Los Mas Valientes as the VMF continues to introduce its programs with a reading of Fagiani’s poem, Litany of San Vito printed on what resembles a holy card, depicting the Congressman as a secular saint.

Most recently, the VMF’s reach has gone international. Thanks to London-based Saverio Romeo, a Picerno native who read Stephen Siciliano’s article on the street renaming in New York City, the VMF participated in a three-day festival dedicated to the seven-term Congressman in Italy in April. The event took place in Picerno, Basilicata –Vito Marcantonio’s homeland –near Avigliano, where educator Leonard Covello hailed from. Members Roberto Ragone and Gary Bono attended. Stateside, the Marcantonio-Covello mentorship evolved into a partnership in East Harlem.

The VMF’s work has received much attention in the media thanks to contributions by people such as Stephen Siciliano, who writes the blog, Marcantonio. Additionally, People’s World reporters Gary Bono and Gabe Falsetta have written extensively about the VMF; John Tarleton at the Indypendent has helped promote the VMF; the staff at Portside and Ivan Periera at AMNY have all helped to get the word out, as has the online bilingual publication La Voce di New York; as has OGGI, the only Italian daily newspaper in America. Many other articles have appeared in the Bronx Chronicle and other sites online and in print.

• Summer, 1991: a small group of activists founded the first VMF.

Its purpose was always clear: to commemorate the work of the radical, seven-term Congressman Vito Marcantoino.

The VMF was on hiatus for a time, but the initial event served a catalyst for future activities and the VMF was soon resurrected.

• December 10, 1994: The East Harlem Historical Organization, Union Settlement, and the Italian Americans for a Multicultural US or IAMUS, with the assistance of Kathy Benson, co-sponsored a conference at the Museum of the City of New York entitled Vito Marcantonio and Coalition Politics. Activist Pete Pascale, who personally knew Marcantonio and devoted his life to the youth of East Harlem, was presented with the second Vito Marcantonio Award.

• May 1997: The John D. Calandra Italian American Institute of Queens College sponsored a two-day conference: “The Lost World of Italian American Radicalism,” whose plenary session was dedicated to Marcantonio. This event also resulted in a book co-edited by Dr.  Gerald Meyer and the late Distinguished Professor of Italian American Studies, Phil Cannistraro. This time, the Vito Marcantonio Award was presented to Ralph Fasanella, who depicted Marcantonio in two of his most famous works: “Campaign: Lucky Corner” and “Death of a Leader.”

• November 12, 1998: more than 400 hundred people attended “Vito Marcantonio: A Recognition and Celebration” at New York University, making it the largest gathering focused on the Congressman since the Vito Marcantonio Memorial 65 years ago on Dec. 7, 1954.

• 2002: During the Museum of the City of New York’s Centennial celebrations, the VMF event attracted more than 150 attendees.

• November 28, 2012: More than 100 people attended the VMF’s multi-media presentation, Vito Marcantonio and the Puerto Rican People: Solidarity and Progress, an event that  was co-sponsored with the Center for Puerto Rican Studies at Hunter College and the Italian- American Studies Association.

Since then, the VMF has organized and collaborated with Hostos Community College and the Italian- American Writers Association on presentations, dedications, book readings and signings including member Stephen Siciliano’s novel The Goodfather.

The VMF also conducts walking tours that Speaker Melissa Mark Viverito has frequently joined, to the historic Woodlawn Cemetery where Marcantonio is buried near his mentor Fiorello La Guardia, and where now Gil Fagiani who passed on April 12, 2018 lies.

The VMF’s Author Series takes place at the NY Public Library on Mulberry Street, thanks to Sherri Machlin the librarian at that branch.

Among the authors and books that have been featured are the re-publication of Leonard Covello’s The Heart is the Teacher; Michael Parenti’s Waiting For Yesterday: Pages from a Street Kid’s Life; Simone Cinotto’s The Italian Table: Food, Family, and Community in NYC; East Harlem native, Christopher Bell’s series of historic books including, East Harlem Remembered; Hostos Professor Marcella Bencivenni’s Italian Immigrant Radical Culture: The Idealism of the Sovversivi in the United States, 1890-1940; and Nelson Denis’ The War Against All Puerto Ricans. The most recent book presentation was The Agitator: William Bailey and the First American Uprising Against Nazism.

Other events have included Beloved Comrades: The Political and Personal  Partnership of Annette T. Rubinstein and Vito Marcantonio, with Gerald Meyer and Stephen Siciliano at the NY Public Library on Mulberry St. Additionally, the VMF conducts Study Groups.

A video of yesterday’s event was prepared by Adam Milat Meyer and will soon be posted on YouTube. For more information, visit vitomarcantonioforum.com.