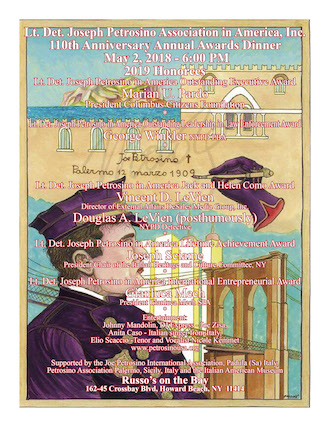 The Lt. Det. Joseph Petrosino Association in America honored the late NYPD Detective Doug LeVien with the Jack and Helen Como Award at their annual awards dinner held on Thursday, May 2, 2019, at Russo’s on the Bay in Howard Beach. This year’s event has marked the 110th anniversary of the day when NYPD Lt. Det. Giuseppe (Joseph) Petrosino was gunned down while on an undercover operation, leaving behind a legacy of a love of America and Italy, as well as his dedication to law enforcement and his belief that everyone has the right to live a life free from fear and intimidation.

In that same vein, this year, the organization honored the late Det. LeVien to remember the significant contributions he had made during his life as a New York City Police Detective. After serving in the Marines, a young LeVien made history when he posed as a crooked cop and wore a wire to collect evidence in the corruption-busting “Gold Bug” investigation, and when he infiltrated the Sicilian Mafia in New York City as wiseguy “Tommy Russo.” He became the only detective to be placed in the Witness Protection Program when threats were made against his life, as he was set to testify at trial. He was a member of the elite NY Organized Crime Strike Force, and served from 1984-86 on the President’s Commission on organized crime. Later in life, LeVien served as executive assistant to long-serving Brooklyn D.A. Joe Hynes, and, with Juliet Papa, co-authored “The Mafia Handbook,“ a look at the facts and foibles of New York’s crime families.

The organization also honored Det. LeVien’s son, Vincent, who is the Director of External Affairs for the DeSales Media Group. Vincent honored his Dad and carries on his legacy by living a life of service to others as a member of many philanthropic organizations. Service to others is the cornerstone of Vincent’s life. “Being able to be here and honor my father is wonderful and I am honored to do so,” Vincent Levien said. “He was a man that always cared for his family and was always trying to give back. He taught me and my brother honor and loyalty. He taught us to always do the right thing. He was a man that always wanted to give back and protect the people and city that he loved. Tonight, we honor his legacy.”

“Douglas LeVien was the modern-day Det. Petrosino”, Bob Fonti, president of the Petrosino Association in America, said. “Having his son here to carry on the legacy of both men is a tremendous honor. Douglas and his son Vincent, live it every day and give so much back. They always have cared for their families and community and make sure they do everything they can to give back and help the people they love.”