A celebration rich in emotion at the IIC, an award ceremony for The New York Times’ Gaia Pianigiani, pianist Rosa Antonelli’s “Libertango” and much more. 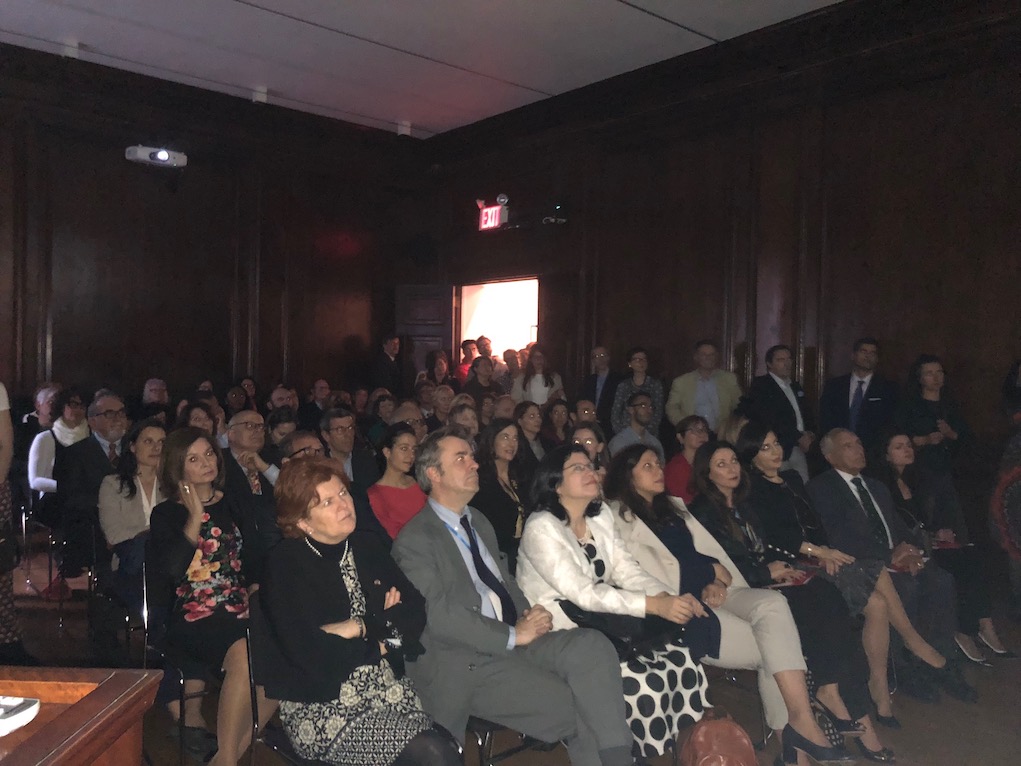 There were many people who came to celebrate April 25th, our sixth birthday and the second edition of the Liberty Meets Beauty VNY Media Award, which this year went to Gaia Pianigiani, Italian reporter for the New York Times. Readers, friends of La Voce, institutions, diplomats, sponsors, and collaborators celebrated an evening of liberty and beauty, as underscored by Editor Stefano Vaccara, at the prestigious Italian Cultural Institute, just a few steps away from the Italian Consulate.

After the greetings delivered by Paolo Barlera of the Istituto Italiano di Cultura, and the Honorable Francesca La Marca, Parliamentary Deputy for North America, Giorgio Van Straten, the Director of the Institute—who was not able to attend in person—reminded us all in a video previously recorded, of the significance—indeed, of the need—to celebrate the Day of Liberation especially at this particular historical moment. 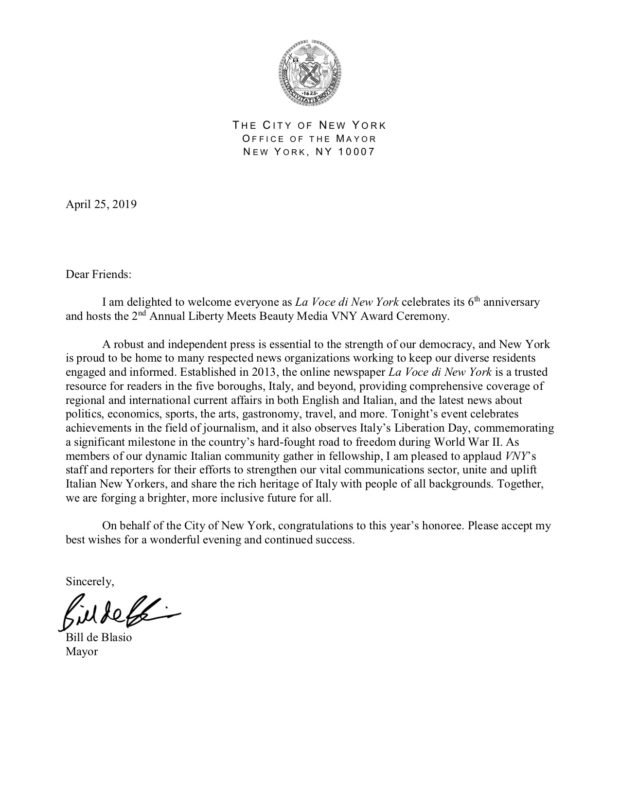 This year, New York City Mayor Bill de Blasio also sent his regards to La Voce, addressing us in an eloquent letter—read aloud by journalist Giulia Pozzi—in which he mentioned the importance of a “robust and independent press” committed to keeping everyone who lives in the city correctly informed. He recognized the crucial role that La Voce plays in this respect: “Established in 2013, the online newspaper La Voce di New York is a trusted resource for readers in the five boroughs, Italy, and beyond, providing comprehensive coverage of regional and international current affairs in both English and Italian, and the latest news about politics, economics, sports, the arts, gastronomy, travel, and more,” De Blasio wrote.

Then, Vaccara introduced the most-anticipated moment of the evening: conferring the second edition of the “Liberty Meets Beauty VNY Media Award” to Gaia Pianigiani. At the last minute, the 36-year-old native of Chianti, Tuscany, and reporter for The New York Times in Rome couldn’t be present in New York, but she stayed up till late to Skype in to greet the whole audience and, in light of her award, to explain her conception of the values of liberty and beauty.

In reply to the director’s question on what she would recommend to young journalists who approach this profession in the midst of a thousand difficulties, Gaia spoke of the courage to pursue one’s dreams—at least for those who feel journalism is a kind of mission.

After this exciting moment, Vaccara showed the audience an abbreviated version of the segment that Andrea Fumagalli dedicated to La Voce di New York for “L’Italia Con Voi”, a Rai Italia broadcast. This segment recounted the values of La Voce, the passionate work that is hidden behind each day at our newspaper, and featured Piero Bassetti, President of Globus et Locus and the first theorist of “Italicità,” who spoke about the role of La Voce as not just informational media, but also as a collector of “Italic” interests of all those enterprises that might like to address a  public that is interested in Italy and its values, and at the same time open to a more comprehensive worldview.

Another important speech was given by Alberto Milani, President of the historic Italian American Chamber of Commerce of New York, who presented the new project “Vetrina Italiana” in collaboration with La Voce di New York. This “showcase” would be an opportunity for Italian companies to promote their businesses in our newspaper, in light of the values of Liberty and Beauty, marking the meeting place between Italy and the United States. More precisely, it would be a window of excellence of “Made in Italy” and Italian businesses all over the world.

Thanks to a partnership with United Voices 4 Peace, Italo-Argentinian pianist Rosa Antonelli graced us with a performance of Astor Piazzolla’s “Libertango” a song that, as she had explained to us in the interview published a few days ago, “represents liberty as understood in various aspects: the liberty to be happy, to express oneself, and to be free in embarking on new ideas.”

Towards the end of the evening, it was time for expressing gratitude. Director Vaccara recognized the presence of illustrious guests: first and foremost, Deputy Consul General Silvia Limoncini; Consul Chiara Saulle; Consul Irene Asquini; the staff of the UN President of the General Assembly, Maria Fernanda Espinosa Garces– represented by spokeswoman Monica Grayley– and chief of communications Mark Seddon; also officials of the mission of the United States and France to the United Nations. From the Italian mission to the UN, Ambassador Stefano Stefanile and Ilaria Ragnoni, spokeswoman of Ambassador Mariangela Zappia, were both present. Vaccara then thanked all his colleagues: the Chair of the Board of Advisers of La Voce, Vito De Simone; English section editor, Grace Russo Bullaro; Emmelina Pezzano’s invaluable translation collaborations; Editor-at-Large Marcello Cristo; interns Emma Bass and Eugenio Massari; and, naturally, the “creatives of beauty” Publisher Partner Italy of La Voce di New York, Emilio Pursumal, and Creative Director Antonio Giambanco. A heartfelt thanks went to all the sponsors, who offered guests a very welcoming and rich banquet with fine wines at the end of the evening: Monini, Bastianich, Ribalta, Norma, I Love Panzerotti, Illy,  Nutella Cafe,  Gladiator Wine.

The final greeting, to end the evening, was given by the Consul General of Italy to New York, Francesco Genuardi, who, though in Europe at the time, left a video message to thank La Voce di New York for representing the values of “Italian-ness” every day, both in the United States and abroad.

The evening continued with fun and cheerful togetherness, thanks to the delicacies generously offered by our sponsors. This is what happens when Liberty and Beauty meet!

Campanilismo: When the Bell Tolls only for Your Town

Campanilismo: When the Bell Tolls only for Your Town