Zero, now a stalwart in the alternative culture scene, creates events in opposition to the often comically jaded nightlife in New York 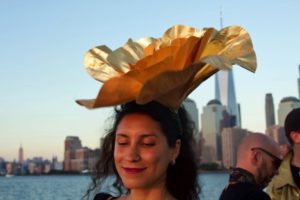 The sun is setting over Lady Liberty, and everyone is here for it. The “Circle Line” cruise – a New York tourist classic that has been gliding along Manhattan’s incomparable skyline for over 70 years from Pier 83 – is now leaning precipitously to one side as dozens of glistening party-goers outstretch their limbs for a sunset selfie with Gotham’s increasingly significant symbol of welcome and tolerance. Party organizers “Zero” have taken it over with their annual “Golden Boat” party, which took place this past Saturday, bouncing to electronic beats along the Hudson and East Rivers all evening long. 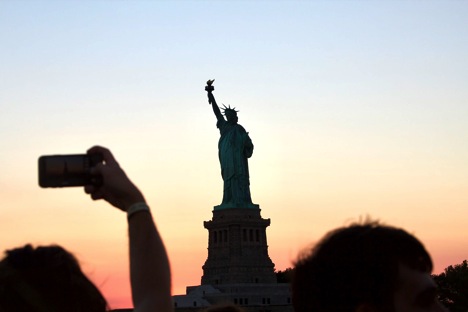 And welcoming and tolerant it is, and quite deliberately so: Zero, now a stalwart in the alternative culture scene, creates events in opposition to the often comically jaded nightlife in New York, and much in line with the communitarian, radically-inclusive and self-expressive principles integral to the Burning Man experience. Everyone is welcome here, as long as you wear gold – and everyone abides. Gold hot pants, glittering turbans, sequins galore: anyone who has visited Burning Man recognizes the look and feel, an aesthetic that has reached beyond parties and into a thriving arts scene, advertising and entertainment.

Zero – whose tagline is “celebration and magic” – throws a host of electronic parties throughout the year, with some of the most sought-after musical acts of the Berlin electronic scene and more, often kept a secret until the last minute (but almost always in Brooklyn). Past themes have been Art Basel and seasonal masquerades – and of course, boat parties. Coming up this year is the much-anticipated Zero and Kater Blau takeover – a legend of the Berlin nightclub scene – on October 13th, right on time for ever-popular (and rightly so) Halloween season.

Zero-goers and organizers alike insist this scene is unlike all others. “It was an a-ha moment when I started 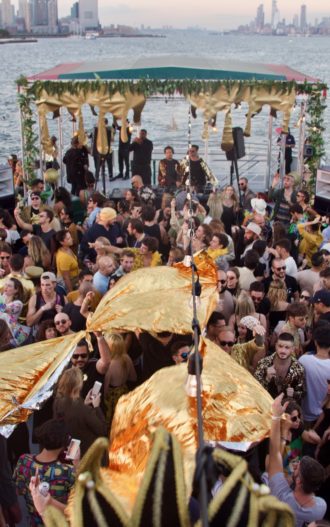 coming here,” says one gold-clad attendee with a heart in the shape of a mirror around his neck – “it’s all about love, and self-love.” Richard Hooban, founder at Zero, agrees – making a point of wanting to deliver a sense of connection, inclusiveness and authenticity often found wanting in metropoles like New York. “It began seven years ago on a terrace in Chinatown…nightlife wasn’t what it is today in New York, it was very sparse and dark. We wanted to create the atmosphere we wanted to experience, and since back then nobody else was doing it, we set out to do it ourselves. We foster a community approach to nightlife. We create space for anyone who wants to participate to participate,” he adds, “We also do not have a separation of ‘VIP’ or ‘bottle service’ – everyone is equal at ZERO and everyone is treated with respect and care. I think this goes a long way to creating a shared experience.”

Finally, and most importantly, Hooban says, “at the end of the day, it’s always about having fun and having a good time…Life in New York is hard enough – nightlife should be about making memories and having fun.”

Chiara Trincia is a native New Yorker with Italian roots who specializes in writing on international affairs for eminent personalities, UN agencies, NGOs and civil society - and has worked for the BBC World Service and Thomson Reuters to focus on underreported stories. For La Voce, she writes about all things international New York - from arts and culture to the goings on at the United Nations.

Cheat Death NYC: Grandiosity and Paradoxes at the Time of Coronavirus

Just Back From the Southern Border: An Update on the Migrant Crisis

One Year After Khashoggi’s Murder, His Prophecy on Yemen Has Been Fulfilled