What makes this city so special that you don't need a caption to recognize it?

I could fascinate you easily by speaking of New York City and its beautiful landscapes, parks, bridges and neighborhoods, as well as its well renowned museums.

According to the usual standards, you will be able to see the beauty of all this and much more. But I want to make my task more difficult, talking about a different New York: the real one.

In this column, I’m going to describe the real beauty of this amazing city: I’m not going to tell you stories about the New York you see in the movies, I will simply show you its real essence.

It’s hard to love New York, impossible not to adore it.

Let’s start this journey together: if you give it a chance, I promise you will never forget New York.

What do you see in this picture?

It shows the aesthetic beauty of the landscape and its reflection; but, on second thought, it’s just buildings. So why is everyone so fascinated by them?

What makes this city so special that you do not need a caption to recognize it?

The first time I saw New York from above, I felt overwhelmed by the endless streets, buildings, cars and people.

I looked at it and I wondered what all those people were doing, where they were going, when they would have stopped. A mix between oppression and excitement. 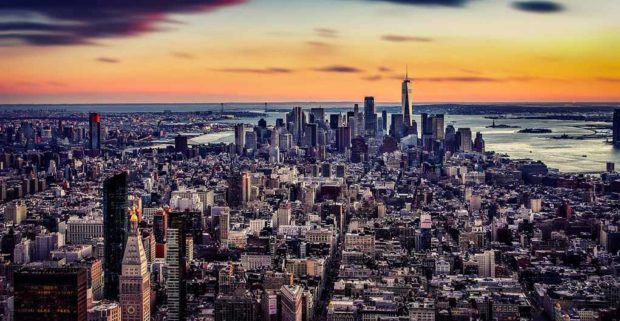 Mysterious, charming, contradictory. A contradiction due to the uniqueness of every person living in this city and helping to make it different from all the others.

Looking at it now, after two years, I see it differently, I feel different.

Because, to see the beauty of New York, you need to understand it, forgive it, allow it some time.

It is like that strict teacher in high school who seems to have it in for you, but who actually let you achieve the best results digging deep inside your soul and bringing out qualities that you didn’t even know you had.

New York is like a friend who won’t flatter you, who won’t be falsely kind, but will always tell you the truth.

New York speaks to you in a different language, intended as a form of representation of the world. And, as if by magic, that same world is now different through its lens.

The soul of New York is an explosion of colors, in a vortex that moves at a fast pace.

High-speed energy, your personality intact at the center, free to be yourself, carrying your personal experience with you as a resource to understand what surrounds you and what is happening within you.

Dynamism, restlessness, centrality, depth of the human being. In a word: energy.

New York, so different from what we are used to, everything’s so fast; in order to understand, you need to look at its details, to slow down.

If you get overwhelmed by the speed, you may lose yourself in the vortex; but if you can ride those colorful waves, a beautiful rainbow will magically open before your eyes.

New York is all the opportunities you can seize.

New York teaches you that you have to be yourself, because that’s what makes each of us special. Like colors traveling together without ever mingling, without losing their identity, without the need to adapt, but being part of a plurality of cultures, intended as autonomous entities, well distinct and having equal dignity.

New York belongs to those who were born with the desire to make a dream come true, because without dreams, without the will to achieve something great, to improve, to change, you wouldn’t even try to live in this difficult city, where it’s so easy to get lost.

New York is the city of dreamers.

I’ve never met anyone in New York who doesn’t have a dream to fulfill. For me, this is the hidden essence that unites all people living here, thus becoming a single community. The perception of this freedom gives you positive energy and the desire to be part of it.

Therefore, is the cultural, linguistic, social background we grew up in – that remains a part of us and which we refer to – a strength or a weakness? As an Italian, I still remain attached to a traditional dimension that daily clashes with and meets the freedom, the development and the chaos of a reality such as that of New York.

Being proud of our origin is, in a sense, natural and universal, highlighting those particular features which characterize our traditions and distinguish one community from another.

Therein lies the ability to control our fierce, promoting tolerance and dialogue among different cultures, and not conflict.

Used to our cognitive habits, in this place everyone undergoes a traumatic process, which we perceive almost as against-nature, that is getting out of the habit of something that we know very well to become aware that there is no single way of being. This awareness will prepare us to decode the messages that we receive in different ways, widening our capacity for understanding.

Once this initial process is over, we won’t look at those places like before anymore, thus changing the way in which we perceive the world around us.

I will continue this journey by bringing you to the first place I visited, telling you how I saw it the first time and how I see it now.

Orafa e designer salentina. La mia gioventù tra mare, arte e gli ulivi della mia terra. A 12 anni ho chiesto il primo saldatore ai miei genitori invece di una normale bambola, dopo 20 anni mi ritrovo a New York. Specializzata in Italia in design del gioiello e oreficeria: metalli preziosi abbracciati a meravigliose gemme riescono a dare forma alla mia immaginazione. Nel 2012 e’ nato il mio marchio: "SARA GRECO GIOIELLI", dal motto “Arte Sensibile. Perfezione Irregolare.” Vedo per la prima volta New York 3 anni fa e tuttora lavoro come orafa e manager per un’azienda di gioielli in oro, platino e diamanti nel Diamond District. Per me il bello non come qualcosa da inventare, ma da scoprire. In “Beauty and the city”, racconto il bello di New York visto attraverso i miei occhi. www.saragrecogioielli.com A goldsmith and designer from Salento, I spent my youth between the art, sea and olive trees of my land. When I was 12, I asked my parents for my first welding torch – rather than a normal doll – and now, 20 years later, I am in New York. I specialized in jewelry design and goldsmithing: precious metals combined with magnificent gemstones shape my imagination. My brand, “SARA GRECO GIOIELLI”, was born in 2012 and its slogan is: “Sensitive Art. Irregular Perfection.”. Three years ago, I came to New York for the first time and now I work as a goldsmith and manager for a company in the Diamond District, handcrafting gold, platinum and diamond jewelry. For me, beauty is not something to be invented, but to be discovered. In “Beauty and the City”, I talk about the beauty of New York seen through my eyes. www.saragrecogioielli.com