So Much for Global Italian Style: Italy Loses Face in Fashion Flub

Food, wine, furniture, cars, these are just a few of the “Made in Italy” creations that make us feel so powerful and admired outside of our borders. But our biggest pride is certainly fashion. It goes without saying that Italian clothing brands are associated with the highest standards of quality and style all around the globe. Even when the nation is on its knees because of the economic crisis, Italian products remain highly valued on the international stage, admired by all.

But during the months between 2018 and 2019 a series of events have brought into question the cultural and ethical adequacy of our clothing sector.

November 2018, Shanghai. Dolce and Gabbana, busy with the preparation of a fashion show that is rumored to be epic, posts three promotional videos on Instagram in which an Asian model dressed in the brand, attempts with evident difficulty to eat traditional Italian dishes such as spaghetti, pizza and cannoli, with chopsticks. The disbelief and astonishment on social media are thunderous: the videos are called outright racist, degrading and ignorant. During the storm of comments on Instagram, Stefano Gabbana lets loose on a follower and in a private conversation via direct message–later shared by the girl and gone viral–in which he defines China as a country of “Ignorant Dirty Smelling Mafia”. The show is canceled by the Chinese government and in a matter of hours the entire offering of Dolce and Gabbana products is wiped out from the Chinese online market. In a pathetic effort to save the situation, the brand’s account declares that Mr. Gabbana’s Instagram profile has been hacked. And just as ridiculous was the apology video in which the two Sicilian designers say sorry “from the bottom of their hearts,” expressing all the love they feel for China.

The following month Prada debuts some monkey-looking toys, dark brown in color, with plumped red lips, in its Christmas windows. It’s an instant scandal in the United States. The creatures’ appearance resembles Black Face, the caricature symbol of the African American oppression in the 1800s-1900s in the USA. This time the indignation goes beyond social media as people also gather and protest outside of the brand’s flagship store in Soho, Manhattan. The Milanese label immediately takes down the merchandise and issues a letter of apology posted on social media. According to the statement, it was never intended to make any racial reference, as that would have been completely against the company’s moral values. 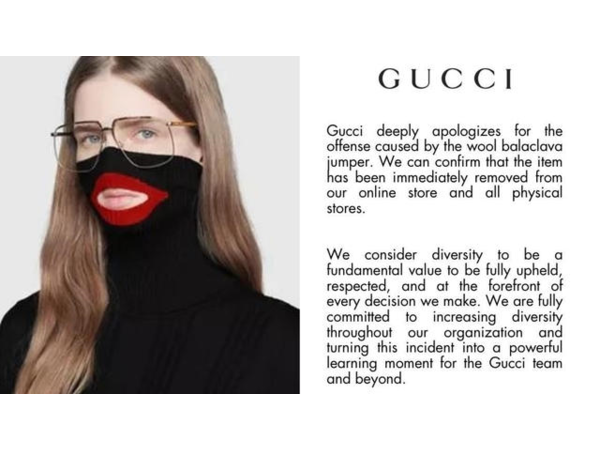 In February 2019 another Italian giant of the fashion scene causes a similar scandal. Gucci airs online a “balaclava” style sweater, with the high turtle neck unfolding and covering the wearer’s face up to below the eyes. Corresponding to the blonde model’s mouth there is an opening in the garment with big, red intarsia lips around it. This image once again seems directly inspired by Black Face and the fashion world revolts. The turmoil of comments storms the label’s Instagram page, captioned by the disgusted black community. “Happy Black History Month”, “Canceled”, “Racist” are just some of them. But in this instance the reaction of the brand is more than a simple apology. In a matter of days after the incident Gucci’s CEO Marco Bizzarri gets on a plane to address the situation in Harlem (Manhattan) with Dapper Dan, the legendary African American designer who has an ongoing collaboration with Gucci. Dapper is widely recognized as the father of the streetwear-meets-luxury movement in the hip-hop world as he pioneered it back in the 1980s. He–and with the help of a local council– aids Bizzarri in the creation of a plan of action for his home offices. As part of the program that is developed, a dedicated team of experts whose sole role will be to ensure cultural diversity and inclusion are given a prominent role in the company.

In just a few months three of the biggest names on the international fashion scene have caused scandals by producing images and products considered racist and offensive. The common denominator? Each of these brands is Italian. Regardless of the fact that Gucci has taken a strong stand in favor of progress announcing corporate initiatives that will help to diversify the staff inside their offices and raise cultural and racial awareness, the road to change is still long for the rest of the country. As a fashion designer from Italy, who has been living in New York for nine years, I found myself often reflecting upon these events. And just as often, I have been asked the same question by colleagues and friends trying to understand: “why Italy?”

My answer has always been the same: Italy is a homogenous nation identified by a local culture rather than an international one. There are no opportunities to meet different cultures within Italian borders and there is a generalized lack of consciousness and knowledge of others. On the contrary, there seems to be a shared sentiment of superiority that I encounter so often living abroad. An example is Italian tourists visiting New York City. They critique food and so forth, comparing every experience through their own cultural filter, so sure of how it should be done to be right and to be better, based solely on their own expectations. They seem to be unaware that in this country there is no unified lifestyle similar to the one that they are accustomed to back home; instead, there are a thousand different ones, as many as the languages spoken and the nationalities that inhabit this metropolis.

Italy is distinguished by a social and cultural narrowness that manifests itself constantly. For instance, it’s a small country with a unique language not spoken elsewhere in the world. Yet we remain among the worst English speakers. And even with that said we continue to dub American movies instead of watching them with subtitles. Because in Italy everything gets “Italianized”! But let’s get back to fashion. Why aren’t similar scandals happening in British or French fashion houses? Because those operate in more diversified societies where, regardless of racist social and political movements, a natural sensibility towards non-white groups exists as these minorities have been part of these countries for centuries. Unlike Italy, which historically has been a nation of emigration, where influxes of immigrants from other parts of the world have begun just in recent times. So now the question is: is such close minded-ness still possible, in 2019, in the face of a total globalization? Well, apparently yes. But what I find unacceptable isn’t really this cultural stagnation. After all, I remain convinced that, even in juxtaposition with my personal idea of an adequately evolved society, in your own home you have the right to think and believe whatever you like.

What truly appalls me is that such a small-minded mentality is so solidly entrenched within companies serving an international or rather, global market. In today’s world unified by Instagram, Facebook and YouTube, it’s no longer possible to think the way we did twenty years ago. That was a time in which big brands and fashion magazines were creating and disseminating beauty standards and trends from a pedestal, while the public was passively absorbing that information without a voice to express opinions or to debate. But with the advent of social media and smartphones, the sectors of communication and clothing have experienced a true shift of power. Today it is the consumer who dictates his or her preferences on products. Even more importantly, he or she holds the power to create trends and brands. The phenomenon of Instagram influencers like Chiara Ferragni is a testament to that.

So now more than ever, I find it impossible to justify this perpetual cultural ignorance when it comes to serving an international clientele composed of multiple ethnicities. If we add that the groups offended in the three episodes represented crucial markets that have also been taken as sources of inspiration for these brands—indeed, idolizing the respective styles as is the case of Gucci and hip-hop culture– then the scandal is even more unbearable, as it could exemplify real Blaxploitation. By definition, Blaxploitation can be defined as the superficial adoption of black culture imagery, trends and styles as a direct source of creative inspiration while maintaining an external position and remaining completely ignorant about it, all to sell a product and make money. After all it seems as if black culture is appreciated in the context of show business, music and fashion, but always enjoyed while keeping a certain distance.

In the end, I believe that the more a market is international, the more are the ethical and social responsibilities that a brand must assume. This is not just my opinion, it is an opinion also expressed by the public itself. As is evident from these recent events, consumers are ready to revolt against even the most beloved labels with the lethal force of a tsunami, denouncing and destroying the biggest brands’ reputations on social media, calling them racist and hypocrites, causing losses of millions of dollars in profit.

So Much for Global Italian Style: Italy Loses Face in Fashion Flub

Oscars 2019: Between Hedonism and Activism, all that Glitters is not Gold

Oscars 2019: Between Hedonism and Activism, all that Glitters is not Gold