At this year’s 42nd annual NIAF Gala Weekend at the Washington Marriott Wardman Park Hotel in D.C., all aspects of Italian heritage were celebrated, including food, the fine arts, and scientific discovery. The weekend’s events included the medical conference, “Mediterranean Diet, Human Health and Longevity,” sharing the latest in research into a vital part of Italian culture –– diet and food. Conference presentations explored how the recipes of Italian grandmothers are among the healthiest in the world and can even help fight disease, such as cancer. 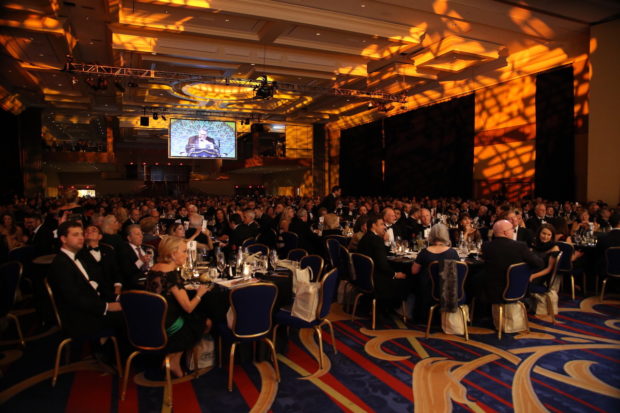 Organized in collaboration with the Sbarro Health Research Organization (SHRO) at Temple University, the November 4, 2017 conference included opening remarks by SHRO President Antonio Giordano, and the presentation of the Giovan Giacomo Giordano NIAF Lifetime Achievement Award for Ethics and Creativity in Medical Research. The award was established in memory of Antonio Giordano’s father, Giovan Giacomo Giordano, a renowned pathologist and former professor  of the Department of Anatomic Pathology at the University of Naples and chairman of the Pathology Department of the National Cancer Institute of Naples “Pascale,” who dedicated much of his life to cancer research.

“Italians have been at the forefront of scientific discovery since the time of the Romans, and this is just an extension of that history,” said Gabriel Battista, Co-Chairman of the NIAF Board of Directors. “For many Italians, this researcher has confirmed what they already knew.”

Battista’s parents were born in Italy and he grew up eating the Mediterranean Diet. Today, his favorite dish consists of his homemade marinara sauce, which is made with tomatoes he finds at a farm, paired with a good bucatini.

“This isn’t a surgical procedure or a pill, it’s really good food,” said Immaculata De Vivo,  professor of medicine at Harvard Medical School, whose research has been dedicated to the mechanisms of cancer. “There really is no downside to promoting this diet.”

De Vivo explained that the Mediterranean Diet consists of little red meat, fish as the main source of protein, olive oil as a source of fat, and lots of grains, fruits and vegetables. She added that this was originally a diet for poor farmers who grew all of their own food and ate in small portions.

In an effort to understand the Mediterranean Diet as it relates to the mechanisms of cancer, De Vivo has conducted research on telomeres, which are found at the ends of human chromosomes.

Over time, a person’s telomeres become shorter as a natural part of aging. However, De Vivo found that an unhealthy diet can contribute to the shortening of telomeres at an unnaturally quick rate, which can make a person more susceptible to disease. When participating in diets such as the Mediterranean Diet, telomeres become stronger and shorten at a normal rate.

“We all knew that the Mediterranean Diet consisted of healthy foods, but this allowed us to look under the hood –– to understand why,” De Vivo said. “We found that it is the synergy of all of these ingredients, and maybe one glass of wine with a meal, that makes the diet healthy.”

As the king of the Mediterranean Diet and the second most-consumed food in the world, the tomato was also studied by the Sbarro Health Research Organization, alongside researchers at the University of Siena in Italy.

Their research found that the genetic characteristics of San Marzano and Corbarino tomatoes help block molecules involved in cell division, slowing or sometimes stopping the spread of cancer cells, such as gastric cancer.

“The term, ‘We are what we eat,’ is true, but we don’t actually understand the meaning of the cliché,” said Antonio Giordano, the founder and director of Sbarro. “We go to a supermarket without truly knowing what is really healthy or what happens to us when we eat certain foods. By conducting this research, we are unveiling exactly what about certain tomatoes makes them healthy.”

The intersection of food and good health in the Italian community was on full display in the NIAF exhibit hall, as a crowd gathered around Romana Sciddurlo, grandmother of Rosella Rago, the host of the Italian cooking show “Cooking with Nonna.” Nonna Sciddurlo kneaded the pile of dough the way her own grandmother had taught her, adding a little water in intervals to ensure a perfect texture. She smiled as she recreated the generations-old pasta recipe from scratch. They cooked and served different recipes of Sciddurlo’s homemade sauce using the same garden-grown ingredients and unique techniques that Italian grandmothers have used for generations.

To them, preserving the recipes of Italian grandmothers means to celebrate the heritage of Italian culture –– a heritage that also includes sophistication, style, community, and scientific discovery.

“[NIAF] does a lot of good by offering scholarships and raising money. But that’s not all this organization is all about,” said Viola. “We are about community and family. We are about remembering where we came from and celebrating our heritage as Italians.”