I Wrote this with the Help of Ludwig

Living and working in a multilingual world, I’m always excited when I find an improved translation software. I came across Ludwig almost by chance thanks to an online review, and I was immediately intrigued by its approach to translation.  Instead of regular translation software, it is a smart translator and linguistic search engine, which helps find the perfect word or sentence within a particular context.

Until now, when I have been in doubt, I have used the discussion forums in WordReference which are based on the same general idea but, instead of searching for correct sentences automatically, they rely on suggestions from users. On the other hand, Ludwig’s algorithm draws from a huge database containing texts written by journalists, writers, researchers and other scholars, so the amount of highly reliable sentences to compare with one’s own translation is enormous.

When I learned that this startup was the product of Italian (Sicilian to be exact) creativity and ingenuity, I decided to interview Roberta Pellegrini, co-founder of the project. I also tested Ludwig in the translation of this article into English, so our readers can directly assess the results.

Who is in your team?

“The inventor and captain of our team is Antonio Rotolo, an archaeologist who in 2014, after 6 months as a Fellow at MIT, decided to devote himself body and soul to developing Ludwig. His dream was to give everyone the power to easily write in English. I (Roberta) deal with brand identity; I studied the philosophy of language, then cognitive science specializing in decision-making processes. I am currently completing a PhD in Management at Wharton. The other team members are: Federico Papa, copyright attorney and expert in technology law, he manages all the legal aspects related to our company; Francesco Giacalone is our designer and front-end developer; Daniele Tagliavia, a former journalist, makes sure Ludwig gets visibility around the world and Antonino Randazzo, a computational linguistics expert, heads our software development team.” 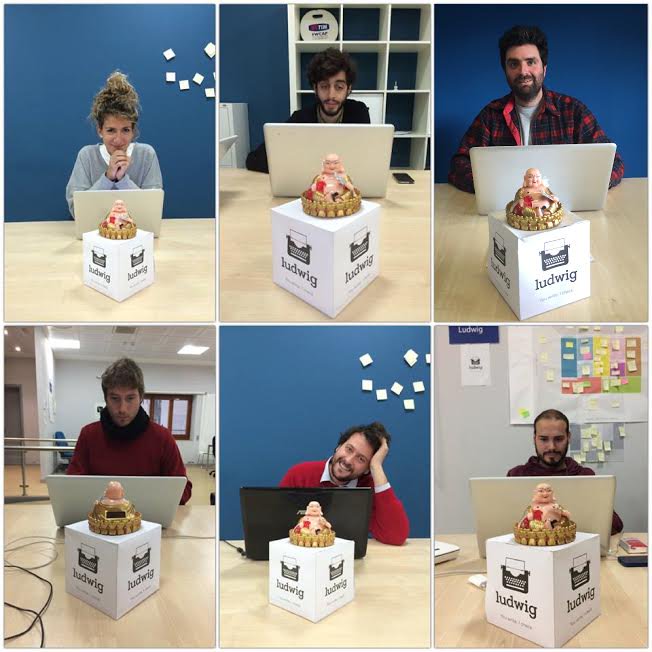 How did you all meet?

“We are all Sicilian. Antonio and Federico were classmates in high school and have been friends for 20 years.   I met Antonio in front of a club in Palermo, he was sitting on his Vespa and we began to talk about books, travel, dreams and we have never stopped. I met Federico through Antonio a few days later. I liked him right away and the three of us started a beautiful friendship, the kind that makes you want to share important projects. I knew Francesco Giacalone and Daniele since we were kids, but I got to know Francesco much better when he lived in Lisbon.  We rented a van from there and drove up to Granada to visit Antonio who was pursuing his PhD in Spain. Once we started developing Ludwig, we searched far and wide for engineers with the right skills and our same passion, that’s when we met Antonino, Francesco Aronica and Salvatore.”

After listening with pleasure to Roberta’s Italian story, with a Mediterranean flavor, about their team’s formation, I ask her how they started Ludwig?

“Ludwig was born from our daily need and struggles to write in well-written English despite years and years of study abroad experience. The idea came to Antonio during his Fellowship at MIT. Then, back in Palermo, he described it to Federico and I over a beer. We were both dealing with having to write in English for our doctorates, and his idea sounded terrific. We had wanted to do something great together for a while, and Ludwig gave us the push we needed. Who better than us – who knew very well the problems of written English for foreigners – could design a solution? So we decided to establish our first startup.”

Have you already raised any capital?

“Yes, in 2014 our idea got 25,000 Euro in seed funding from Working Capital Telecom Italia, which also included the participation in its Business Acceleration Program.”

Regarding your competitors, don’t you think Google Translate is already a very good translator? I personally use it frequently and am very pleased with the results; especially in recent times the quality of its translations has increased immensely.

“Google Translate is a very advanced tool; in fact it is among Larry Page’s priorities. As you say, its recent improvements are very noticeable. This is good for Ludwig, which uses the Google plug-in which allows users to type phrases in any language, while adding the crucial element that’s missing: a comparison with reliable sentences written by human beings.  Basically, Ludwig allows users to check the accuracy of Google translations.  Unlike Google, Ludwig is not an automatic translation software but rather a support tool, which introduces the human factor. Our users get quality sentences written by other people who they can imitate and from whom they can learn. What’s nicer than learning from other human beings who write better than us?”

What is your business model?

“Currently Ludwig is a free web page and it will remain so because we want to give everyone access to our tool. In addition, this strategy aims to create a pool of many passionate users, right now we have about 35,000 active users per month from over 160 countries and we hope to reach 100,000 by year-end. However, we are also planning to monetize our business through other channels such as premium subscriptions, advertising and development of optimized software for corporate ad hoc text search.”

What are your next steps?

“In September, we will launch a desktop app and a mobile app. They will add convenience to our tool making it accessible outside of the website. This will mark a significant improvement in usability and it will be our first paid feature. Subsequently we will develop other functions. Finally, we are establishing partnerships with major publishers, prestigious Italian and foreign universities, and English schools wanting to integrate Ludwig into their e-learning platforms.”