The Soulful Side of Bordeaux Wines

The first time I visited Bordeaux was in 2010 with my husband, to attend a wine conference. Even though we could only take one vacation that year, he sacrificed his own personal time to share this trip with me to one of the most famous wine regions in the world. I knew we would see many prestigious names – châteaux that helped to create the fine wine world that we know today – that were attached to grand estates and an impressive history that includes one of the most famous wine quality assessment systems, the Bordeaux Wine Official Classification of 1855. But I did not realize that Bordeaux wines had so much soul until that first visit.

Getting to Know Bordeaux Wines

It seems most wine drinkers view Bordeaux in one of two ways. Either they think of the horrendously expensive wines that are auctioned at extraordinary prices that make the news, or they know the entry level, mass produced wines that are typically sold at supermarkets/discount retailers. Please don’t get me wrong, there is nothing wrong with either of the aforementioned categories, but it does give a very narrow view of Bordeaux. There are many passionate producers making small production, affordable wines with lots of soul, yet, in the past, these producers have been missed by even great connoisseurs of Bordeaux wines.

This is now changing, as the Conseil Interprofessionnel du Vin de Bordeaux (CIVB or Bordeaux Wine Council), an organization founded in 1948 to represent the wine industry, is starting to highlight these smaller, lesser known producers. I recently tasted a bunch of Bordeaux wine samples that illustrated these hard working, innovative winemakers who are giving their sweat, blood and tears to make remarkable, yet affordable wines.

I have to say that although I was pleasantly surprised while tasting through all of these truly unique wines, especially considering that my past life in the wine trade involved tasting lots of Bordeaux, there was one that stood out: Château du Champ des Treilles.

I was already impressed by this beautiful white Bordeaux (discussed in my tasting notes below) but I was taken aback once I read who made this wine: winemaker Corinne Comme, the wife of Jean-Michel Comme (winemaker at the famous Château Pontet-Canet) and this was their own family vineyard.  I flashed back to that first trip to Bordeaux in 2010: as my husband and I were visiting Pontet-Canet, we somehow ended up joining a group of journalists, even though ours was just supposed to be a casual visit. The journalists started questioning Jean-Michel Comme about the reasons for making Pontet-Canet biodynamic, which at the time was considered shocking that such a prestigious château would try such a risky practice. 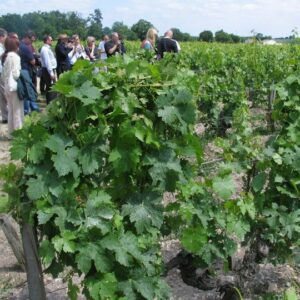 I will never forget his response. He said that his mother battled and died of cancer and after that time, all he could think about were all the pesticides that were infecting the vineyard/winery workers. He talked about how emotional of a time it was for him – at one point he got very depressed and he said it was his wife, Corinne Comme, who helped him and encouraged experimentation with biodynamics. Since they had such success with their own family vineyard, Comme was able to convince Alfred Tesseron, the owner, to convert Pontet-Canet to biodynamic production. I remember that, at the time, I desperately wanted to taste his family’s wines but it was not to be until just a little over a week ago.

Sometimes, when we do not live in a place, it is easy to make sweeping generalizations that, in this regard, can shape our view about the wines and the people who make them. We forget that the universal truths touch us all, no matter where we live or what language we speak. Often times many individuals living in a land foreign to ourselves are driven by factors similar to what we experience at home, that give soul to the fruits of their labor. And so now, I not only think of Bordeaux as a prestigious area, but a soulful one as well.

2014 Château Tire Pé, “Diem”, Bordeaux, France ($12): 100% Merlot. Do you want to challenge your idea of Merlot? Do you think it is always jammy and sweet, soft and simple? This organic Merlot wine will change your mind. It has wild blue and black fruit with hints of dusty earth and a bright finish. 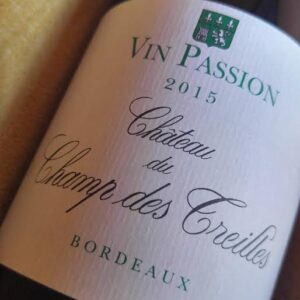 2015 Château du Champ des Treilles, “Vin Passion”, Sainte-Foy-Bordeaux, Bordeaux, France ($15): 34% Sauvignon Blanc, 33% Sémillon and 33% Muscadelle. This is the wine that I discussed in the article above, made by Corinne Comme. Hints of lapsang souchong tea, with cooling tones of lemon blossom and fresh thyme – but I would say the overwhelming note is white stony minerality – a great sense of place.

2013 Clos Puy Arnaud, La Cuvée Bistrot de Puy Arnaud, Castillon Côtes de Bordeaux, Bordeaux, France ($25): 70% Merlot and 30% Cabernet Franc. A certified BIODYVIN biodynamic vineyard that is owned by Thierry Valette, one of the former owners of famed Château Pavie. I learned from Bordeaux expert Chris Kissack, aka The Wine Doctor, that even though Valette would seem to be part of the Bordeaux establishment, he is really an outsider that has pushed the enveloped in Bordeaux. Also, Valette is known to strive for excellence, including his commitment to biodynamics. This is certainly a wine that pushes the envelope and I can imagine some people either loving or hating it. A bright, lifted nose that is created by a ‘Nouveau’ style short, gentle maceration. The aromatic nose has notes of wild strawberries and raspberry sorbet, yet the palate has real concentration with a nervy energy that makes this wine an unpredictable bad boy.

2010 Château du Seuil, Cérons, Bordeaux, France ($34 for 500ml): 100% Sémillon. A sweet wine made in an area just north of Sauternes. This dessert wine is certified organic and made by a Welsh/New Zealand couple, Sean and Nicola Allison, and it’s proof of how much more diverse the region of Bordeaux has become in modern times. A delightfully rich and decadent libation with flavors of marmalade, honey and sweet spice, yet has an overall lively quality for a sweet wine made from 100% Sémillon.

2009 Château Pontet–Canet, Pauillac, Bordeaux, France ($220 for 750ml):  This is the 5th growth château that I first visited in 2010 where I experienced that touching story told by the winemaker, Jean-Michel Comme. This wine was given top marks, equal to some first growths, by The Wine Advocate and Wine Enthusiast as well as other great internationally known wine critics. It just goes to show that some soulful wines can break the barriers of traditional constraints. A recent tasting revealed that this wine still needs seven to eight more years to mature, but it was still interesting to taste now. A big wine with lots of structure, fleshy black fruit and multiple layers of complex nuances (cedar, graphite, cigar box).  It had an exceptionally flavorful length that was eloquently balanced on the finish. This wine will make great old bones.

Chazz Palminteri Returns to the Theatre: “I’m Still That Kid From the Bronx”