8 Oscar Nominations for “Elvis” Biopic but Reviews are Mixed: Garish and Shallow

Luhrmann fails to probe the character’s depths, but leaves no doubt as to the icon’s talent and charisma

Baz Luhrmann’s “Elvis”  has captured 8 Oscar nominations. Among them for Best Picture, Best Cinematography, and a Best Actor nod for the little-known Austin Butler who played the title role. Nevertheless, the reviews have been mixed.

After watching Baz Luhrmann’s award-winning “Elvis” (2022) the first impression that registered was “lurid”: garish, dark, overly saturated with color, scenes and emotions racing along like a whirlwind. The New York Times reviewer rightly described it as “carnival sleaze and Vegas vulgarity… all that satin and rhinestone, filtered through Mandy Walker’s pulpy, red-dominated cinematography…You might mistake this for a vampire movie.”

There have been countless movies in multiple genres made about Elvis, the King of rock’n’roll, most notably the 1979 biopic starring Kurt Russell reputed to be one of the best, but Luhrmann’s is uniquely and unmistakably in the quirky style of the director. This latest Hollywood attempt to bring Elvis back to life on the screen is told from Colonel Tom Parker’s perspective.

Played by an unrecognizable Tom Hanks loaded down with prosthetic devices that add years and pounds to his look, the controversial Svengalian manager pleads his case directly to the viewer, claiming he was not responsible for “killing Elvis,” a charge frequently leveled against the nefarious father figure who emotionally manipulated, professionally exploited, and financially abused his “boy”.

At two and a half hours long, you would think there would be plenty of time to cover the icon’s life, but instead the pace is rushed and breathless, some scenes lasting a mere few seconds, other time periods covered in montages that span years and add nothing to the storytelling. 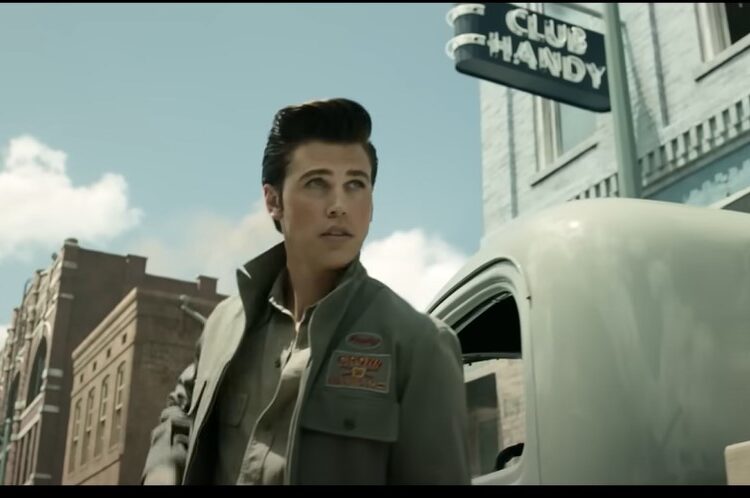 Austin Butler is not quite an Elvis lookalike, despite the external attempts to channel the well-known “look” of the King: inky black pompadour, lavish sideburns, heavy eye makeup, over-the-top costumes with flowing capes and massive belts, but he has captured the physical movements, the body language and the performing style with uncanny accuracy.

One of the themes of the movie was Elvis’ overwhelming need to be loved by his audience. Performing was for him an addiction equal to, if not stronger than, that of drugs, alcohol and sex. It is on the stage that Elvis fully comes alive and it is also where Butler does his best work. The frenetic energy, the playfulness as he teases the audience, the kisses bestowed on every girl who can grab him, all leave him exhilarated but utterly exhausted. The charisma is palpable.

Thankfully, the sound score, though too eccentric at times for the purists, is dominated by Elvis’ own recordings. The introduction of hip hop, blues, gospel, and a few anachronistic pop renderings all serve to remind us that Elvis himself was a rule-breaking innovator and eclectic in his tastes and style.

In the end, watching Baz Luhrmann’s “Elvis” you won’t learn anything new about the King. One reviewer even suggested that as a biopic this has all the depth of a Wikipedia entry, but hearing his voice, “in all its aching, swaggering glory, you understand how it set off an earthquake”.

Elvis died at the tragic age of 42, feeling a failure, already a relic of the past as he was forced to perform in one of the first Las Vegas “residencies” catering to the older crowd, having never made a quality movie, addicted and impoverished—thanks to the manipulations of Col. Parker. Little could he have suspected the gigantic legacy he left behind. Luhrmann’s film does little to probe the depths of Elvis as a complex and troubled individual, but leaves no doubt about his immense talent and ultimately fatal dedication to his audiences.

Anti-monarchists Plan to Protest at Charles III May Coronation

Ever Heard of the Beautiful PINK Waters of the Pacific Ocean? Now You Have