Beautiful, really. And really talented, too.

Ellen Williams, Welsh soprano known in all the world, has an angel’s face along with a bewitching way of singing, almost like a siren.

Appreciated by millions of people across 6 continents, this has been said about her voice: “Agile with silvery charm”. And her voice is featured on award-winning soundtracks, her music videos viewed over 8 million times. 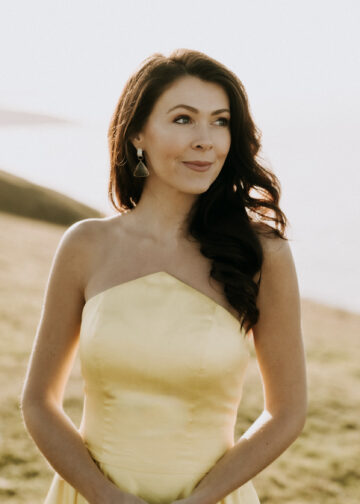 Famous. Beautiful. Talented. What else?

We are interviewing her on the event of the release of an extraordinarily intense and sweet song she sings, especially composed for a film that has just been presented at the 44th edition of the Cairo International Film Festival: “L’Ile du Pardon”, directed by Ridha Behi, with Claudia Cardinale, Paola Lavini and Katia Greco. The title of the song is “Rosa’s song”, written by Ellen herself together with the famous international composer and conductor Marco Werba, who signed the entire soundtrack of the “L’Ile du Pardon”.

Who or what inspired you to pursue a career in music?

“As a child I was always around music, my mother is a renowned concert harpist, and my grandmother encouraged me from a young age to learn the hymns and folk songs of Wales. I was encouraged to compete in Eisteddfodau, which are national cultural festivals in Wales for music, dance and poetry, and I had many successes in both classical singing and folk competition. One Christmas I was given Hayley Westenra’s CD as a gift, and just loved her choice of songs and the way she sang, her voice was very pure and similar to mine when I was younger and I knew I’d love to do something similar. There’s a great deal of drive and perseverance needed to pursue a career in music, and as one success led to another and I continued to develop my voice, I couldn’t imagine doing anything else!”

Who have been the most important influences on your musical career?

“The genre of music where I feel most at home has relatively recently become known as “Classical-Crossover”. This could mean songs from all different genres performed with classical influences or given a classical arrangement, and for me this style of repertoire was first introduced to me by singers such as Sarah Brightman, Katherine Jenkins, Josh Groban and Andrea Bocelli. I also love music by Yanni and think there’s something so wonderful about the audience enjoyment in an André Rieu concert where classical music is made accessible to those for whom it may be new.

I also love film music, these luscious scores are the most emotive kind of music for me, and composers such as John Williams, Hans Zimmer, Rachel Portman and now Marco Werba too are always top of my playlists. When Marco asked me to be part of his new film score for The Island Of Forgiveness, especially to sing such a beautiful and emotive melody, I really was delighted”.

With which singer would you like to sing a duet?

“There are so many who I’d love to sing a duet with, let’s aim high! Amongst those are Andrea Bocelli, Josh Groban and Yanni!”

Which of your performances made you most proud?

“It’s been a dream of mine to sing the National Anthem of Wales in the Principality Stadium in Wales which holds 74,500 people, for as a long as I can remember! Most likely since the first time I was taken to see the Welsh Rugby Team play as a little girl. This dream came true recently when I was asked to sing the anthem ahead of the first ever British Grand-Prix for the World Supercross Championship. The crowd cheered and sang along, and there really isn’t anything like it!”.

What gives you strength and inspiration for your on-stage performances?

“Knowing that the audience are wanting to be moved in some way, and it’s my job as storyteller to share something with them”.

How do you choose your repertoire?

“My answer here largely follows on from my answer to the previous question, if I can make the audience feel something through song, that’s the most important thing. I’m currently working on an album of inspirational hymns and rousing sporting anthems, many of these are staples of the repertoire, songs that people love to hear again and again, and my rendition of Amazing Grace was streamed a million times within the first week of its release! I’m excited to have my own renditions of these songs out there, many are songs that people love to hear and have made personal connections with, but I’d also love to work on some more original music”.

Which are the most appreciative and the most severe publics you have faced so far?

“The most appreciative audiences are those who are willing to be moved by music, be that in the prestigious Royal Albert Hall, or singing for the elderly in the community. I think in a concert setting, people have made their way to the venue to appreciate the performance. It is very different to, let’s say, singing for an audition panel, or in a competition as you know you’re there to be judged, although to any young singers reading this, it’s also important to remember the panel are wanting you to do well”.

What can be done to keep and grow classical music audiences?

“Many of the UK opera houses offer outreach programs to bring opera performance into primary schools and introduce children to the artform from a young age. For myself, growing up with classical music all around me was a big factor in developing an interest in the genre. The classical-crossover genre also makes classical accessible by offering songs that people may know very well from say rock or pop, and introducing a new classical spin on that song. For example my classical rendition of Leonard Cohen’s Hallelujah has been viewed over 3 million times, with many people saying they weren’t classical music fans but had been moved by my rendition and went on to listen to my other classical releases”.

Could you tell us something about your collaboration with Marco Werba, the song, the music and the lyrics?

“Marco approached me having heard my classical rendition of the new James Bond theme tune No Time To Die on YouTube, and asked if I might like to sing the main theme for a new filmscore he was working on. Marco sent me the melody which was breathtakingly beautiful, although vocally challenging to sing the chorus refrain on a repeated G, which the team in the studio asked to be sung piano during the recording session in Angel Studios in London. I was delighted to be invited to compose the lyrics for the song which I titled Rosa’s Song after discussing the plot of the film and the characters and the roles they play with Marco and producer Ziad Zamzeh.

See the boat out on the tide

Can forgiveness be our guide?

These are the opening words of the song and the melody can be heard to mimic the rise and fall of waves on the ocean. When there’s seemingly no hope or light to guide the protagonist out of life’s hardship and people’s betrayal, perhaps holding on to the hurt is the problem and can forgiveness help them find redemption?”

Which part of the world, where you have not been yet, would you like to visit?

“For years I’ve wanted to visit Japan, I would love to see their many UNESCO sites and majestic temples, of course the spectacular cherry blossoms which is my favourite tree, and immerse myself in their beautiful culture. Should there be an opportunity to perform there I would be delighted”.

Paramedic Unknowingly Treats Her Own Dying Daughter at Accident Site