More than a decade passed since Fratelli Mancuso released an album, leaving their fans—myself included—hungry for new music from the Sicilian duo.

Their latest recording, Manzàma, released late in 2020, was well worth the wait: it is nothing less than a masterpiece, rich in melody and rhythm and thematically cohesive. It also packs a powerful emotional punch.

It’s not as if the brothers had been idle in the years since their previous album, Requiem (2009). The singer-songwriters have given concerts all over Europe, held seminars in various Italian schools, and composed music for plays and films. They have collaborated with the Sicilian actor and director Emma Dante, writing and performing the music for her 2003 production of Medea. Their score for Dante’s film Via Castellana Bandiera (2013) won the Sound Track Stars Award at the Venice Film Festival and nominations for Golden Globe and Nastro d’argento awards.

Their other credits include Rumore di acque (Noise in the Water, 2010), a play by Marco Martinelli and his Teatro delle Albe. The latter production, about the tragedies of immigration, was based on news accounts and interviews Martinelli conducted with refugees who had landed in Sicily after enduring terrible ordeals at sea.

I saw Rumore di acque at the La MaMa theater in New York in 2014. I found it a riveting and unsettling experience. The play is a dramatic monologue delivered by an actor impersonating an Italian general who has witnessed the refugees’ plight. As the general railed about the horrors he observed but could not stop, the Mancuso brothers accompanied him and performed alone when his torrent of words subsided. Their music, plaintive and soulful, was an essential element of the production’s emotional power.

The experience of migration, of displacement, is a central theme of Manzàma. The Sicilian lyrics (the album booklet includes them with Italian translations) express personal emotions and states of mind in poetic and often allusive language. But about midway through the album, they open up to more universal reflections, in what one Italian critic called “a Mediterranean ‘Odyssey’ whose protagonists are women and men often abandoned to their tragic destiny.”  The lyrics for “Animi” (Souls) list names of people who died while trying to emigrate. “Tu vidé ti nni va” (You’re Leaving Too) addresses those who leave without saying goodbye, thinking “it will be easy to fill [their] hands with gold and silver” but who “sleep restless, restless dreams/ adding weight each passing day/on the heart that has already been tested.”

The beautiful title track (“Let it Never Be”) evokes the loneliness of the emigrant: “If we did not have song as a companion/life would be a road strewn with thorns to be traveled barefoot.”

Manzàma, released by the Rome-based company Squilibri, comprises 14 songs, all but two written by the Mancusos. It is an ambitious project. In addition to the brothers, there are 14 musicians, two string quartets (arranged by Franco Battiato, one of Sicily’s most renowned composers and musicians), and a vocal chorus.  The instrumentation, European and Middle Eastern, mirrors the pan-Mediterranean world of the texts: there are guitars, clarinet, piano, oboe, violin, contrabass; but also oud, saz baglama (a Middle Eastern long-necked lute), sipsi (a single-reed flute used in Turkish and Greek folk music), duduk (Armenian double-reed wind instrument), flauta de sabugheiro (Portughese cane flute), sansula (a “thumb piano” similar to the kalimba), and viola de beiroa ( a 12-string, guitar-like Portuguese instrument).

Enzo Mancuso plays seven instruments while Lorenzo confines himself to the harmonium. Both sing, sometimes solo, but more often together, in the piercing, close harmonies that have become their trademark. Text and music reinforce each other: on the more personal songs, the music conveys intimacy, with spare instrumentation and voices; elsewhere, it becomes lush and orchestral, even cinematic.

Manzàma is modern Sicilian music, rooted in tradition but made from indigenous and other elements and experiences. In a 2019 speech included in the album’s booklet notes, the brothers note, “We were born in the 1950s. We have known the Sicily of the trades, of the peasants, of the migrants; we have listened to the voices of men and women, the songs of the street and of the churches, in the artisan workshops, in the mountain paths, among the fields.” But, in emigrating, their “baggage” was “enriched by the sounds of the cities, of the factories, of the voices of the world, of the poets and musicians we met.”

After listening to and absorbing this remarkable album, I contacted Enzo and Lorenzo and interviewed them via email. What follows is an edited and translated transcript of our conversation.

Why and when did you leave Sicily?

“In the mid-1970s, to look for work, like many of our generation and many, many others who had preceded us.” 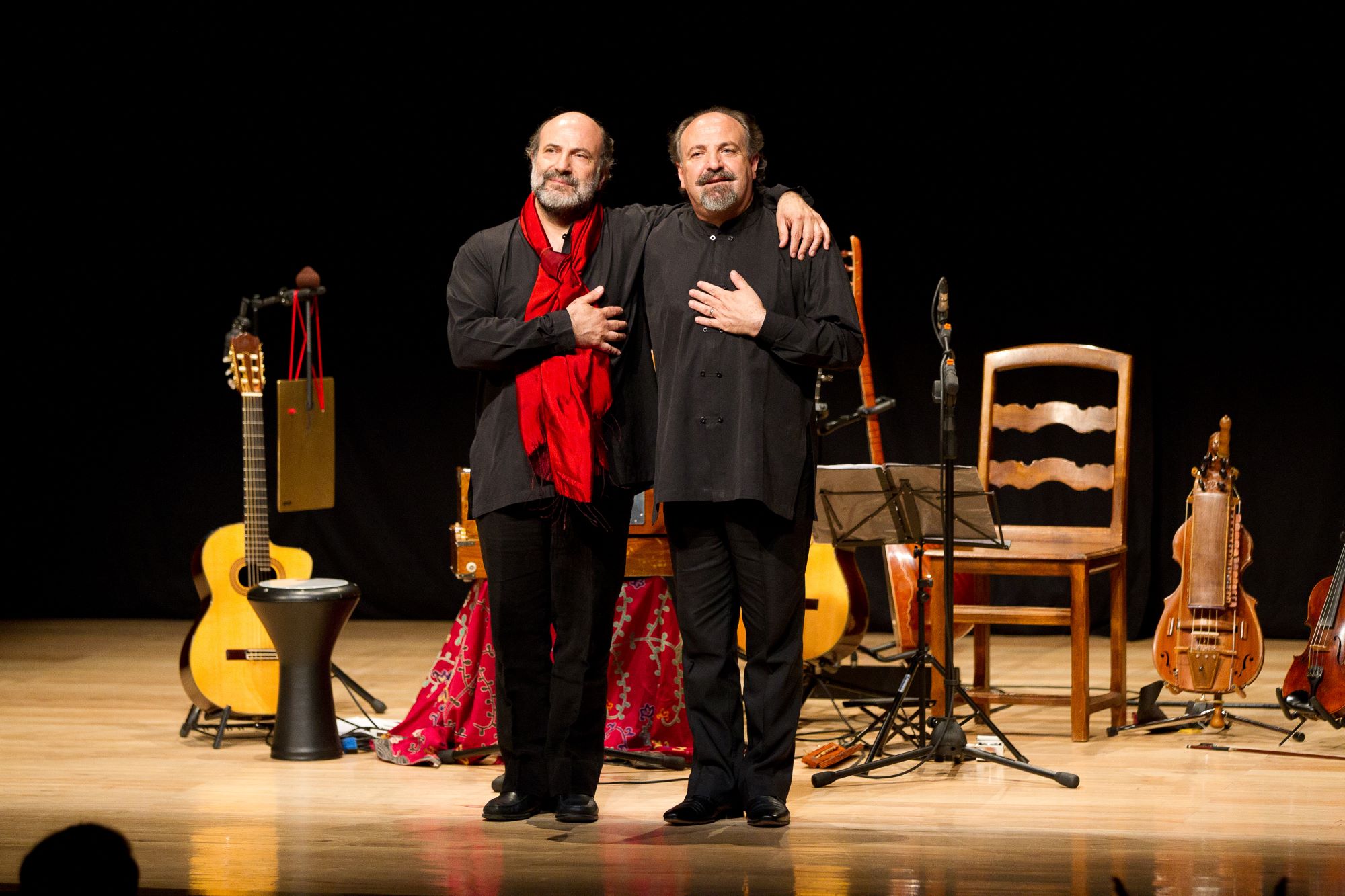 You emigrated to London. How was that experience? I read that you worked in factories and pursued music in your free time.

“Ours was the typical emigrant condition. Working in the factories gave us the awareness of belonging to the working class. Consequently, the need became increasingly urgent to express with music and poetry this experience of life. The first songs were born, the first concerts in London, among friends and companions, in some of the city’s folk clubs.”

When did you come back to Italy and why? Did you perform in Italy when you came back?

“We returned to Italy in 1981 following the changed social and political conditions in England that occurred with Margaret Thatcher’s Conservatives’ victory in the 1979 elections and because we wanted to turn our lives around. We settled in Umbria, in Città della Pieve. The first years were difficult until the opportunity arose to do a small tour in Germany. After those concerts, the press started to talk about us. From Germany, we slowly widened the circle with the first concerts in France and more and more in Italy”.

How did you learn to play? Did you have any formal training?

“We are self-taught musicians. We learned to play and sing by ourselves, driven by a passion for music and poetry.”

How did you meet the Spanish ethnomusicologist Joaquin Diaz, with whom you have collaborated?

“We were invited in 1985 to a conference on ethnology and folklore in Soria, Spain.  Joaquin Diaz was one of the guests. After the concert, he came to greet us. He proposed to us to record a disc with a record company that released his discs: Tecnosaga. So, after a few months, we went back to Spain and recorded our first LP, Nesci Maria (1986). Since that concert and that first record, Spain has become our second home. Then we recorded two more records: Romances de alla y de aca Sicilia – Spagna (1990) and Trazzeri (2004).”

You have worked in theater and cinema. Your music was featured in The Talented Mr. Ripley (1999), and you also appeared in the movie. How was this experience born, and what were the most important and artistically satisfying collaborations?

“Cinema came with the film The Talented Mister Ripley with Matt Damon and Gwyneth Paltrow and directed by Anthony Minghella. Then a lot of theater, with Emma Dante, Roberto Andò, Marco Martinelli of the Teatro delle Albe with Rumore di acque, which you saw at La MaMa in New York. Other directors, other companies [followed]. In 2013 at the 70th Venice Film Festival, we won the Sound Track Stars Award for the soundtrack to Emma Dante’s film, Via Castellana Bandiera.”

How did you create your sound, which is very distinctive, especially the singing style and harmonies? I hear Arabic and Byzantine influences in the music.

“The sound and the vocals were modeled on the sonorous musical universe of Sutera, the town [in the province of Caltanissetta] where we were born, on the monodic songs of the peasants, on the voices of the street, of the processions, on the religious songs, mainly rosaries and novenas sung by the women in the churches. More generally, Sicily, for what it has always represented in history, has been the theater where the most diverse languages, customs, and traditions, including musical ones, have found expression. Therefore, it is inevitable that a substratum of this inheritance sometimes emerges in the expressive modes that distinguish us. “

We fans have been waiting for a new album for more than ten years. Why didn’t you release one sooner?

“There were several reasons, not the least was our scruples, our modesty in presenting ourselves to our audience with a work that would recount, without any pretense or guile, what has happened in us over the years—the thoughts, the moods, the emotions that have left their mark on our sensory world. Manzamà is a record that deeply traces our feelings about life and the years that have passed.”

How did Franco Battiato become involved in Manzàma?

“We were in Sicily at an independent film festival. A mutual friend took us to Franco’s house, in Milo, under Mount Etna. Talking to him about the new album and some songs in which we would have liked to include strings, to our great surprise he asked us to send him the songs and that he would take care of the arrangements. Franco Battiato has been very generous. In a few weeks, he wrote the parts of the string quartet for four songs [‘Lassami dormiri,’  ‘Occhi di vitru,’ ‘Rosa di carta,’ ‘Un velu d’aria’]”.

You have lived in Umbria for some time. How do you maintain the link with your Sicilian roots when you live outside Sicily?

“We have lived in Umbria for many years now [since 1981]. Sicily is always in our ancestral world and feeling. It lives on every time we speak and sing in Sicilian, and every time we do, it is as if we had never left.”