Fashion Wars! Who Won the Battle of Haute Couture, Italy or France?

It’s not only about a huge chunk of the economy, there is also a question of prestige, bragging rights and national pride

An Armani store and a Chanel store.

It is no secret that France and Italy have been locked in a fashion war for decades. And no wonder, irrespective of the question of prestige and bragging rights, the fashion industry represents a good chunk of their economy. Up to the 1980s the French clearly had the upper hand—indeed, haute couture means high fashion in French. Names like Chanel, Dior, Givenchy and Yves Saint-Laurent went practically unchallenged by the Italian designers. Success did not, however, mean that these prestigious fashion houses sold clothing by the ton—far from it. Haute couture has never been about quantity—not at those prices.  Indeed, before the 1980 and 90s, volume was not a critical marker of success in the fashion industry in general. People owned less clothing, of higher quality, and they made it last by altering it or making do. While those attitudes endured, haute couture was aspirational, it set the standard of fashion, and women dreamed of being among the privileged few  who could own it—or at least its imitations. Then attitudes changed and haute couture and even high-end fashion, became an endangered enterprise. What happened?

While the French were dominant through most of the 20th century, there were cracks in the façade and it became progressively clearer that they were in danger of losing that primacy. Pierre Cardin is credited with dealing the greatest blow to the industry as a whole. This is ironic because he certainly was an innovative designer, and as such he was an asset to the industry. But he caused the damage because he was a superb and visionary businessman who devised the scheme of “licensing”, something that Donald Trump later took to the nth degree in real estate. In other words: sell your name and let others do the work. By the early 1980s, Cardin had sold his name to 800 licensees in products as diverse as suits, chocolate, home furnishings and even bidets.

While perfume had always gone hand in hand with haute couture, this “licensing binge” eventually flooded the market with inferior goods and dragged down even the most prestigious houses that as a result, started to produce low-quality clothing, albeit with a snooty designer label and high prices. The public, however, had wised up and weren’t buying into the scam. If we believe Teri Agins and similar experts, this became the primary factor that undermined the French fashion industry. By the 1990’s Karl Lagerfeld, the designer who saved Chanel by never lowering its standards, and not licensing, was stating that, consumers “are no longer impressed with the prestige of Paris.” Indeed, women were now writing off the unwearable high fashions seen at runway shows as a “publicity stunt” (Agins). 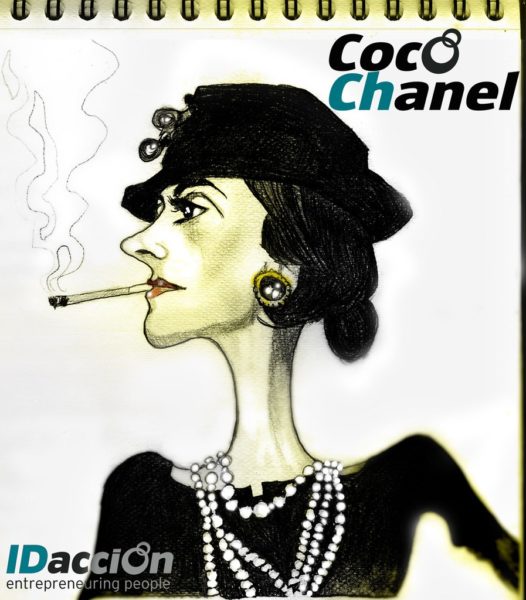 The French had also stumbled on two key strategic moves: they failed to accept what Americans introduced as “bridge lines”, (a lower priced line with the designer’s modified premium label) and the shift of manufacture to Asia.  This concept of “bridge lines” is what ultimately gave American designers the upper hand over high fashion. The likes of Michael Kors and Calvin Klein inherited the higher end of retailing because they found a way to unite fashion that expressed today’s lifestyle with brilliant marketing on a global level. However, this is a major story in itself and will have to wait for me to tell it on another day.

While the French were struggling, making bad decisions, and stubbornly denying that history had passed them by, the Italians, headquartered in Milan in order to be close to their resources  (such as the textile industry in Como ) not only won the luxury retail war (Armani, Gucci, Prada, Ferré, Fendi, Versace) but profited from the French debacle in another way as well, because French couture is frequently manufactured in Italy. The Italians thus hugely enlarged the Italian footprint in fashion on a global scale.

By 1989, John  Fairchild, editor of Women’s Wear Daily, declared that the Italians had won the battle of fashion. In fact, he declared that they now had a monopoly, because “in addition to clothes, the Italians are responsible for designing and producing some of the most beautiful fabrics in the world”. This means that even the French who had survived the carnage, houses like Chanel, and Dior under Lagerfeld, were, in an ironic twist, now contributing to the burgeoning of the Italian industry, since they were dependent on Italy for the materials and the artisans who still possessed the skills to produce high fashion.

I wish this could be the happy ending for the Italian industry, but unfortunately the story is bigger than high fashion—much, much bigger, and in the end, while the Italians won the battle of high fashion, and the Americans took over the middle and  higher end of fashion,  it was the Chinese who emerged triumphant. They won the war because in the retailing field, starting in the late 1990’s, quantity replaced quality and since then volume has been king.

In 1995 an article in the New York Times asked, “Have we become a nation of slobs?” If you want to answer this question in the most empirical way, just look around you and see how many people are going out in public wearing sleepwear or its equivalent. Today we live in what Cline calls “a fashion democracy”. Cline herself is representative of this trend: buying a new item of clothing almost every week from either fast-fashion outlets like H&M, Zara, Forever 21, or from discounters like T. J. Max and Marshall’s. In some cases, she would wear these items just once and then either consign them to a discard bin or let them languish in her closet till she made a general clean up and they would end up in the garbage. The prices we are seeing today are unprecedented: many women will consider a $30-dollar skirt or dress to be their top limit. This furious pace of consumption is being pushed by manufacturers and retailers through advertising. Cline references one T. J. Max ad in which a young college student claims, “I never wear the same thing twice”.

Tim Gunn, the ultimate guru of fashion,  blames “Casual Fridays” for what eventually devolved into “Casual Every Day” or Cline’s “fashion democracy,” and calls the whole process the  “attack of the playclothes.”  How he feels about it is easily discerned in his exclamation: “…get thee behind me yoga pants!”  a humorous reference to Satan. He puzzles over men and women who don’t own even one suit or dress that they could wear to a wedding or a funeral. When asked, their reply is that it isn’t necessary, since they can attend any function now in casual clothes. Cline cites the fact that those born in the 1970’s and later, “didn’t grow up wearing dresses…nor did   they own much in the way of ‘Sunday clothes’”, with the result that they are “largely ignorant of fine tailoring and fit”.

The path that brought us to to this end is a long and complex analysis of societal changes, and for those interested in delving more deeply in this fascinating history, there is an endless number of books detailing it—starting with those cited here. The complex connections between lifestyle and fashion are even more intricate when we consider the chicken-and-egg nature of societal changes. Is fashion responding to changes or is fashion driving those changes? Experts argue over this relationship endlessly.

Our lives today resemble that of our parents very little. Modern life has become more hectic and more active, therefore many people opt for comfort and convenience over appearance. If you’re part of the older generation, then you may remember how different the flying experience used to be. You actually used to dress up for flying, it was a special experience and before landing, many women used to change into an even more elegant outfit because what they had been wearing by this time would be wrinkled and therefore, by the standards of that time, unpresentable. Of course, back then we were not packed into 15- inch seats like sardines and people didn’t have to climb over each other to get to the aisle.

However, a simple trajectory is that over the years, as quality gave way to quantity, people forgot what quality looked like. The younger generations, specifically those under 40, according to Agins, have never seen a garment that was made out of quality fabric, and sewn and finished by a skilled craftsman or woman. They have grown up with machine-made synthetic fabrics, so the vast majority of the population, especially in America, don’t know the difference and don’t care when the fact is pointed out to them.

As we all know, “quantity” and “cheap” are synonymous with China and Asia in general—countries where labor is cheap and working conditions largely unregulated. In the end, while Italian fashion has won the battle in the luxury category, the Chinese have eaten everybody’s lunch. We are now living in the age of disposable fashion and this is what China does better than anyone.

A Chance in Life: a Gala to Help Needy Children Smile