Interview with Francesco Ciabattoni, Professor of Italian Literature and Author of the New Song Writer Website

Hello Francesco, can you tell us about yourself?

After graduating from the University of Turin I came to the United States on a Fulbright fellowship. I went to work at a liberal arts college in Connecticut, a very enjoyable place. Then I moved to Baltimore where I completed my Ph.D. at Johns Hopkins University. My first full position was in Canada, at Dalhousie University, and from 2010 onward I have been at Georgetown University, where I teach Italian literature, and specifically medieval literature: my studies on Italian song are a pleasant offshoot from my principal areas of research.

I know that you have also published books?

My first volume is an analysis of music in Dante’s Divine Comedy (Dante’s Journey to Polyphony, University of Toronto Press, Toronto, 2010). More recently I published La citazione è sintomo d’amore (Carocci, 2016), a study of literary memory in songwriters. I then edited several other volumes, among which is a volume in the successful series Lectura Boccaccii (The Decameron Third Day in Perspective: University of Toronto Press, Toronto 2014, with Pier Massimo Forni). I’ve also published various articles on Dante, Petrarch, Boccaccio, Berto, Pasolini, and Primo Levi.

What projects are you working on now?

I am currently preparing a monograph on the way in which Dante gives theatrical life to his poetry through the performance of dance and liturgical drama. Elsewhere I am publishing a study of musical episodes in the Decameron. And then of course I continue to work on ItalianSongWriters.com”.

This was my next question! Tell me about this website.

The idea is to offer translations of texts with links to Youtube, but also to provide critical commentary and historical-cultural contexts. The songs are a great source and educational tool for teaching not only the language but also the history of our country. ItalianSongWriters.com is a site where various highly distinguished colleagues have collaborated to provide commentaries on a singer/songwriter or on a song.

I have a question that I’ve never dared to ask. I have always found song lyrics banal and superficial compared to poetry. Is this only my personal impression? Do you have an explanation in this regard?

Well, it may have to do with the music market and the reproducibility of this media (Walter Benjamin wrote on this topic), with mass culture, and with our own judgment parameters. However, this is not always the case: there are profound and complex songs, just as there are bad poems. The important thing is not to expect from the song the same we expect from poetry, and vice versa: These are two distinct art forms, with different rules and characteristics and, while they certainly have some points in common, their objectives and means are substantially different. In 1964 Umberto Eco wrote a reflection on pop culture with his Apocalittici e integrati, which also included an essay on mass-market music. I think even today it’s still a valid starting point for those who wish to learn more about the subject. 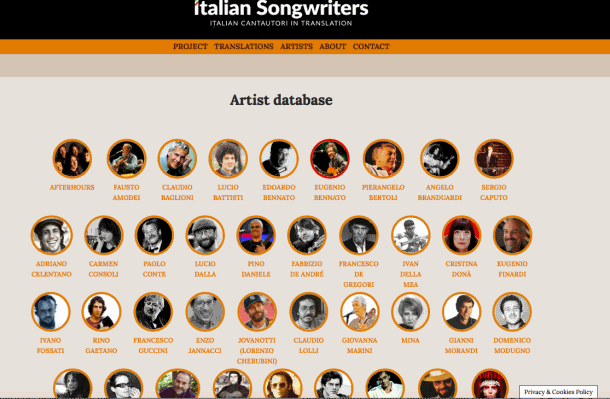 If a native Italian, or a foreigner particularly skilled in the use of our language, wanted to write songs, what sort of qualities should they have? What would it take to be the new “Mogol”?

If I knew the answer, I myself would be the new Mogol, but I can say for example that Mogol and Battisti wrote great songs because with their everyday, colloquial lexicon, they have accelerated the standardization of spoken Italian, revolutionized the language of song and helped to define an identity, that of the new, urban, bourgeois and modern Italian society.

Battisti sang with a voice that was neither powerful nor lyrical, but embodied suffering, bringing to life the private sentimental world of youth, but especially of the bourgeois Italian male in the 1960s. Almost all successful songwriters these days have found favor with the public thanks to their use of everyday spoken (which is not to say trivial) language, with catchy music, and – without doubt – thanks to the construction of a media persona that sells thousands of disks.

Have you ever written songs?

Certainly! In fact, for a (rather short) period of time, I thought it would become my profession. Unfortunately, I am afraid I was not able to adapt to the world of show business, so I changed direction. But I still write and publish poems.

And finally: Who is your favorite singer-songwriter?

It’s difficult to choose only one, but I have to mention Claudio Baglioni, Pino Daniele, Fabrizo De André, Francesco De Gregori, and Daniele Silvestri. But of course my selections, based on a criterion of relevance I myself have arbitrarily set, can be found on ItalianSongWriter.com”.

Castelnuovo di Porto: The Politics of Scapegoat and the Demand for a Future