What is Art, and Who is an Artist?

In Mario Perniola’s book L’arte espansa, published by Einaudi, the world of art appears in an expanded and less definite form. In the length of barely a hundred pages the author attempts to address the fundamental questions of contemporary art world: what is art, and who is an artist? As these definitions become increasingly vague throughout time, the world of art also finds itself confronting traditional values while being challenged by modernity. With a so-called expansion, art has become less graspable and more problematic a concept, destabilizing and destabilized.

Perniola divides his book into four separate sections: artistic strategies, intermezzo, theoretic strategies, and conclusion. Within each part, he explores various theories that illustrate the history of artworks and the historicity of the art world. In this rather theoretical framework, Mario Perniola seeks to unravel the contradictions and arguments regarding art from Apollinaire to Dalí, from Freud and Wittgenstein to Carl Schmitt and Hannah Arendt. Most of the times Perniola manages to tie the strings together with a twist of ingenuity. While introducing the concept of “artistizzazione,” for instance, Perniola uses Shklovsky’s idea of ostran 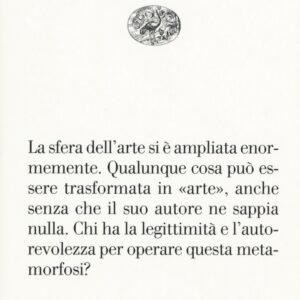 enie (defamiliarization) to open up a new dimension for the strangeness and familiarity in art perception. This is also the perfect point to introduce the Brechtian Verfremdungseffekt, a technique which distances the audience from the work of art itself (theatrical work in this case). Yet Perniola’s paragraph stops right there, as I was expecting more comparisons between Shklovsky and Brecht, maybe even a short discussion on Bakthin and art as a realm of fantasy, Lukács and the magic origin of art, together with Lévi-Strauss’s idea of art as a pathway in between magic and science (which are all scattered throughout the book). My impression is that, instead of delving deeper into a topic, Perniola often turns away from it and only to address relevant points elsewhere, so the whole structure of arguments is not as clear as it should be. For instance, I really appreciate the section on the commercialization of art manifested in Andy Warhol’s art factory, but I would find the argument more persuasive if inserted in the beginning of the book, when the materiality and economic interests of art are discussed. I also believe that the example of Benjamin’s Angelus Novus in the epilogue might have been more effective if it had appeared earlier in the book, because the angel of history could be used as a metaphor for the fragmentation of the art world itself, and in fact, Benjamin’s aura and authenticity in the “artwork essay” seems even more pertinent to Perniola’s discourse on expanded art than the essay on the concept of history and a mere image of Klee’s angel.

All in all, Mario Perniola follows his own flow of ideas while constructing the book, and if looking at passages separately, some of the issues addressed may be applicable not only to the world of art, but to a broader sphere of the humanities. According to Perniola, after the “fringe” turnover, the world of art is returning to the academic, a counter-intuitive turn manifested by the 2015 Venice Biennale. Is education the foundation of creativity? Perniola’s L’arte espansa indeed raises more questions than it seeks to answer, but perhaps it is not a bad thing at all.

Cecily Cai is a first-year PhD student in the Department of Comparative Literature at Harvard University. She studies German, Italian, and Polish literatures; her research interests include music, poetry, and translation.-

What is Art, and Who is an Artist?