Have Italians forgotten too quickly about the past few months of lockdown, fear, and sacrifices, thanks to their summer holidays?

Tourists gathering in a Dolomites hut.

In just a few weeks, Italy was taken back to at least three months ago. We should rewind the tape to around May 12 to find Covid-19 daily statistics similar to those reported on August 23, when the country recorded more than 1,200 new infections—the highest daily increase since the end of the lockdown. As we are writing this article, on August 24, the Health Ministry reported 953 new cases, but the country performed only 45,000 tests (21,000 less than the previous day.)

On May 12, the daily count amounted to 1,402 cases. Eight days earlier, the Italian government had decided to start easing the severe lockdown enacted in March, adding family visits to the strict list of circumstances in which Italians were allowed to leave their apartments (emergency, health, urgent work reasons.) A few crucial economic sectors, such as manufacture and construction, were allowed to reopen, and restaurants and bars could resume their take-away activities. However, concern over the virus was not fading away; social distancing rules, smart working and internal travel restrictions were still a reality for the first Western country affected by the pandemic.

More than three months later, the Italians’ mood seems to be quite different. As after months of lockdown people started to enjoy almost carefree summer holidays, an attentive observer could have predicted a new surge in cases coming. Even the Dolomites, the majestic mountains that crown Italy’s North-East, have been overrun by tourists from across the country. In the sultry days of early and mid-August, on mountain trails and in proximity to railways, it was common to see people in line or crammed, sometimes even without wearing masks. At lunch, finding room in a traditional mountain refuge appeared to be a near-impossible feat. And while environmental activists repeatedly warned about the drawbacks of this year’s tourist invasion, almost no one seemed to be particularly concerned over the consequences in terms of infection rates. 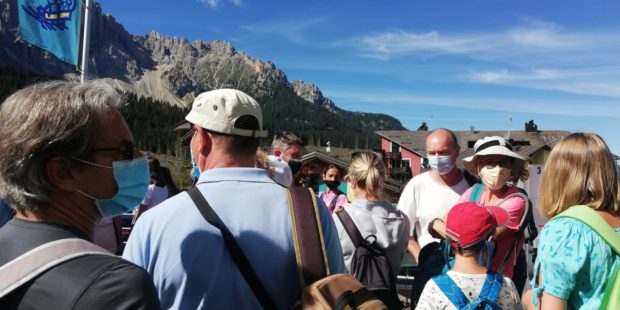 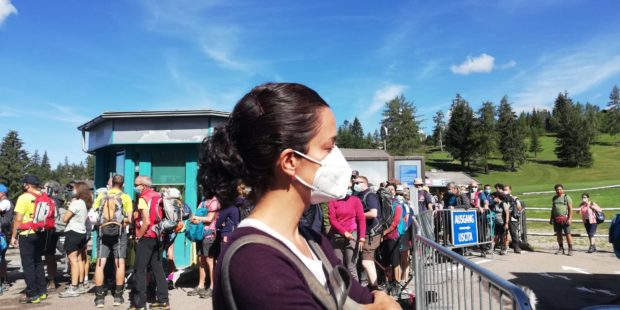 However, Sardinia is one of the regions more negatively affected by tourist flows. Famous for its exclusive nightlife as well as for its crystal-blue sea, many vacationers who spent their holidays in the Mediterranean island ended up testing positive for Covid-19, although, back in July, the Italian region was one of the safest, COVID-free areas in the country. In March, Sardinia’s President, Christian Solinas, resolutely urged the national government to enact drastic measures to protect the region from travel-related imported infections. On March 14, Mr. Solinas signed an order to “close” Sardinian ports and airports, in an attempt to prevent new outbreaks. In May, Solinas proposed the introduction of a “health passport system,” which would have forced tourists to certify their negative coronavirus status upon their arrival. The proposal was labeled as unconstitutional and finally rejected by the national government. In the meantime, the regional tourism sector was facing a deep crisis; tourist flows recorded a drop of 95% in June 2020 compared to the previous year, and of 70% in July. In August, the massive arrival of vacationers, along with the easing of restrictions, triggered new outbreaks, with many tourists who found themselves positive for Covid-19 only once they had returned home.

In mid-August, the reopening of nightclubs sparked outrage in the country. Over the summer, the Italian government decided to let the regions decide whether or not to allow nightclubs to resume their activities. Only after August 15, when Italians celebrate “Ferragosto”—for Catholics the Assumption Feast Day, for non-believers a secular mid-summer celebration—the government realized the harm done. The nationwide decision to close clubs came on August 16, when, according to several experts, it was already too late. In less than two weeks, Italy will be able to evaluate the consequences of Ferragosto parties.

Currently, figures show that the virus is circulating especially among young people who enjoyed their summer holidays in foreign countries or Italy. The median age of new cases has dramatically dropped since March, and it is currently around 30. According to a recent report, more than 30% of new infections have been imported from foreign countries.

However worrying, the new surge in cases is quite different from Italy’s first outbreaks. The country is far more prepared in contact tracing and testing than it was in March, April and May, and while in the first months of the epidemic only people with mild or severe symptoms were tested, the vast majority of the infected is currently asymptomatic. Moreover, intensive care units and hospitals are far from being overwhelmed. However, experts warn that it could be just a matter of time, the situation is expected to deteriorate if, or when, asymptomatic young people coming home from their summer vacation start infecting their parents and grandparents.

The new, sharp surge in cases occurred less than a month before September 14, when Italian schools are set to reopen. Many fear that the rapid increase of Covid-19 cases will pose a threat to the government’s plan for schools, which has already been met with criticism and skepticism. A few days ago, Italy’s Minister for Education, Lucia Azzolina, assured the public that schools will reopen as planned in September, despite new infections and national unions’ complaints. The government hopes that Italy will not be doomed to follow in the footsteps of Germany, where more than 100 schools were closed a few weeks after the school year had started in 9 out of 16 Lander.

“We will not have a new lockdown,” Italy’s Health Minister, Roberto Speranza, told the daily newspaper La Stampa. “I am optimistic, although prudent. Our national health service has become much stronger” than it was in March, he added. However, thanks to summer holidays, many Italians, especially young people, seem to have forgotten too quickly  about the fear and sacrifices made in the last few months. As the arrival of summer marked the “liberation” from the tightest restrictions, it is to be hoped that the beginning of fall will not coincide with a second wave.

In Memory of George Pavia, a Brilliant Attorney in NY, but Not Only for Business

In Memory of George Pavia, a Brilliant Attorney in NY, but Not Only for Business