Entitled Painting in Italy 1910s-1950s: Futurism, Abstraction, Concrete Art, the exhibition at Sperone Westwater Gallery of New York goes beyond the conventional historical caesura of 1945, therefore emphasizing the permanence of abstract trends during the entire first half of the 20th century. It also highlights the eclecticism of the 32 artists and 119 artworks that have been brought together as an ensemble under the “abstract art” label.

The introduction of the imposing 388-color-page catalogue explains the intentions of the gallerist Gian Enzo Sperone, joined for the occasion by Maria Antonella Pelizzari (Professor in the Department of Art and Art History at Hunter College and The Graduate Center, New York). Following the exhibition Inventing Abstraction, 1910-1925 organized by the Museum of Modern Art (December 2012–April 2013), this exhibition focuses on the international dimension of Italian abstract art. The show includes the three main experiments with abstraction in Italy: Futurism, from Giacomo Balla’s first studies in 1912-1913 through Aeropainting in the 1930s; the group of artists exhibiting at the Milanese gallery Il Milione; and the 1945-50s Arte Concreta. Three essays by Maria Antonella Pellizzari stress the historical and ideological context of these movements, allowing us to reconstruct their international connections. 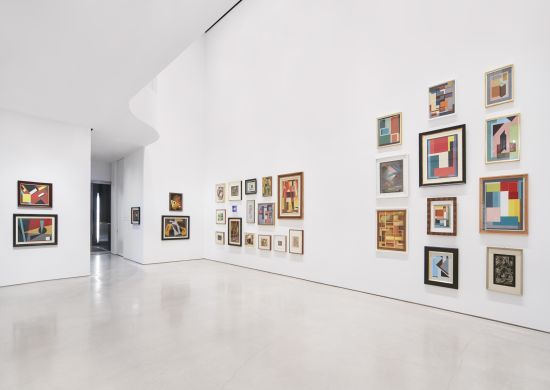 The goal is definitely achieved. In the main room, two floor-to-ceiling walls, reminiscent of Parisian Salons, pay tribute to the four key protagonists of Italian abstractionism: Atanasio Soldati (1896-1953), Mario Radice (1895-1987), Manlio Rho (1901-57) and Luigi Veronesi (1908-98). The display includes around fifty high quality works spanning the 1930s to 1950s. Their geometrical abstraction reflects international aesthetics: in front of these canvases, you can’t help thinking about Mondrian, Theo Van Doesburg, and the Bauhaus artists. In this apparent puzzle of works, colors allow one to distinguish the paintings from the 1930s and those from the 1950s. In the early works, tones are light, while in the later ones, they are strong and vivid, reflecting the energy and hopes of the postwar reconstruction era. 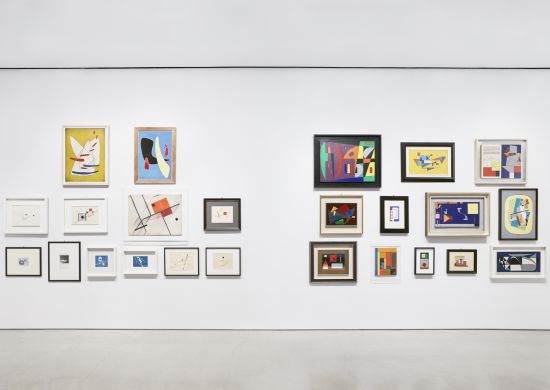 Luigi VeronesiÔÇÖs, on the left, and Atanasio SoldatiÔÇÖs, on the right, paintings (Courtesy Sperone Westwater Gallery)

The catalogue essay written by Pelizzari entitled Abstraction retraces Milan’s artistic environment during the 1930s, when Soldati, Radice, Rho, and Veronesi were shown in Il Milione gallery. Founded in 1930 by the three Ghiringhelli brothers (Gino, Giuseppe and Livio), Il Milione became—in Pelizzari’s own words—“the catalyst for artists, architects, designers and poets […], a cultural center with a library, a conference area, and a Bollettino that published reviews of books and exhibitions, locally and internationally”. The efficiency of this organization reflects the programmatic aspirations of the group, which published the Manifesto dell’Astrattismo Italiano in 1933 and recognized Carlo Belli’s book Kn (1935) as the main theoretical reference defined by Kandinsky as “the Gospel of what is defined as abstract art”. In Kn, Carlo Belli announced that abstract art was participating in the “development of a new civilization oriented towards the Mediterranean axis”. The delicate geometrical abstractions of the 1930s therefore regained their original political meaning as an art willing to regenerate the old Mediterranean “civilization”. It is on the basis of this ambiguous idea of a “Mediterranean style” that abstract art received the Fascist regime’s favor, during a period in which Mussolini reinforced the rhetoric of Mare nostrum in view of the Ethiopian war.

In the late 1930s, with the totalitarian and racial turn, the regime ostracized abstract art, which was defined by the critic Roberto Farinacci as “a disease for foreign things”. In response, artists such as Atanasio Soldati and Luigi Veronesi used abstract art as a weapon of political dissent against Fascism; their radicalization led to active participation in the Italian Resistance. 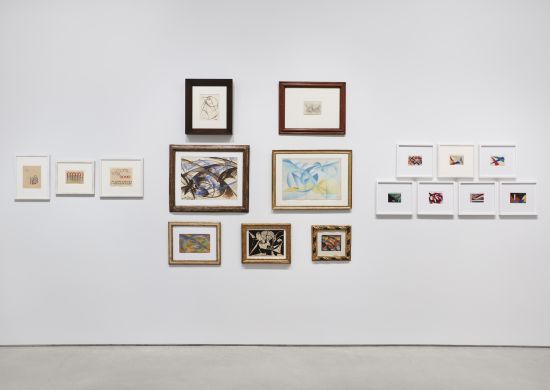 Leaving behind the Milanese abstraction, you encounter the second room of the Sperone gallery, dedicated to Futurism. It presents a few studies by Giacomo Balla and an interesting group of works by Enrico Prampolini, Tato, Fillia (the pseudonym of Luigi Colombo), and Sante Monachesi. All of these artists belonged to the 1930s futurist Aeropainting movement. Balla’s light experimentations from 1912-13 (Iridescent Interpenetrations) hang close to the drawing Speed lines of the Caproni aircraft (1915), recalling the early links between futurist abstraction and aviation. Whether it is the biomorphic and polymateric representations of Enrico Prampolini, the aerial perspective of Tato, the landscape of Fillia, Nicolaj Diulgheroff, Ezio D’Errico, or eventually the astonishing Lights mobile aluminum (1937) of Sante Monachesi, all of these works reference the Manifesto of Aeropainting and exalt it as a means to reach “a new extra-terrestrial plastic spirituality”. 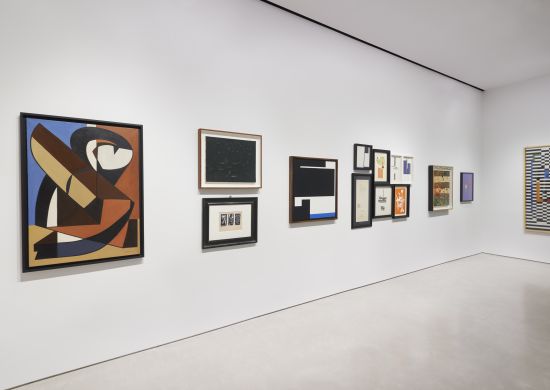 The second floor of the exhibition displays Italian abstract art of the postwar era. Although the works show clear formal connections with 1930s abstraction, they do not share the same will to shape a new world (a shared goal of all the historical avant-gardes). They are devoted to reconstruction rather than regeneration. The several abstract trends on the balcony of Sperone’s second-floor gallery form a moving testimony of the post-war context, deeply transformed by totalitarianism, World War II, and the Italian civil war. A number of artists at this historical juncture identified abstract art as the only language capable of getting rid of the past, and at the same time able to generate a new era of universal values radically opposed to the dogmatism of the Italian Communist Party, which was very powerful at this time and attempting to impose a strictly Soviet socialist realist esthetic. The effervescence of abstract Italian art and its complexity during the 1950s is conveyed to great effect by presenting all together on the second floor works from the “Spatialism” movement founded by Lucio Fontana (1947-58), the M.A.C (Movimento Arte Concreta, 1948-58) centered around Milan, which included Atanasio Soldati, Bruno Munari, the painter and critic Gillo Dorfles, the architect-designer Gianni Monnet, and many other individuals gravitating around these two cores (Enrico Bordoni, Roberto Crippa, Gianfranco Fasce, Albino Galvano, Augusto Garau, Alberto Magnelli, Mario Nigro, Adriano Parisot, Filippo Scroppo, Ettore Sottsass, and Giulio Turcato). 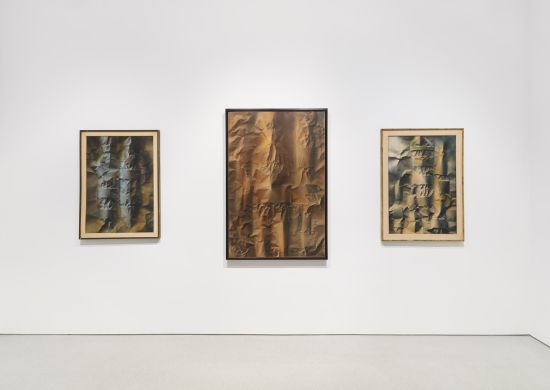 Three unexpected works by Corrado Cagli (1910-76) conclude the exhibition. Paying homage to this painter is a highly symbolic gesture. A member of the Roman School during the 1930s, Cagli, who was Jewish, was forced into exile in 1938, after the publication of the racial laws, first in Paris and later in the USA. In 1945, he participated with the Allies in the landings in Normandy and in the liberation of the Buchenwald concentration camp. The dark abstract human figures and the evocation of myths in these oil-painted paper sculptures could be an invitation to remember the fragility of humanity and how abstract art is steeped in history.

*Lucia Piccioni is one of the CIMA Fall Fellow 2015.

This article has also been published on the CIMA’s Blog.