Halloween Night: the Light of the Pumpkins Will Be Enough

These kids are looking for treats, but Halloween has a trick in store for them.

Mom said it was a half-hour drive to my friend Jack’s, but it’s taken us almost twice as long to get to Purcellville in the afternoon rush hour.

I see zombies and ghosts besieging Jack’s house. They take Halloween very seriously here in the US. I realised that when I went for my first “treat or trick” six years ago right after moving to the US from Italy with mom and dad. My friend Jack is well prepared for the big event also this time.

We ring the doorbell and hear a dog fuss and bark. A little dinosaur named Tommy opens the door. Behind him, his father Peter holds Cooper by the collar. Cooper is a pitbull. It’s a good dog. Its appearance has never been reassuring though.

Janette, the mother of Jack and the dinosaur, is sitting at the kitchen table,  making Jack up as a zombie, just like last year. I’m a gangster for a change. I’m wearing a black suit with white pinstripes and a red handkerchief in my breast-pocket.

They are all busy with last-minute preparations before the candy hunt begins. The atmosphere is cheerful, yet I have a vague scary feeling that I can’t quite explain.

I’m startled by a hinge squeak. A door creaked behind me, where I did not expect there to be anyone else. I turn. Little Lindsay, Jack’s little sister, has pushed the door open.

“This year my sweetie will go trick-or-treating with the big boys. We’re gonna follow you from afar.” says Janette.

We get going. We are a group of six kids, including the little dinosaur.

“I dunno” I reply. I think I’ve grown too old for this thing. Later Jack and I will return to his house to play Xbox. That’s my idea of fun (and the real reason why I came all the way here).

We walk on the sidewalk. The long line of houses in the suburban neighborhood unfolds before us. It’s dark, but the glow of carved pumpkins illuminates the street. 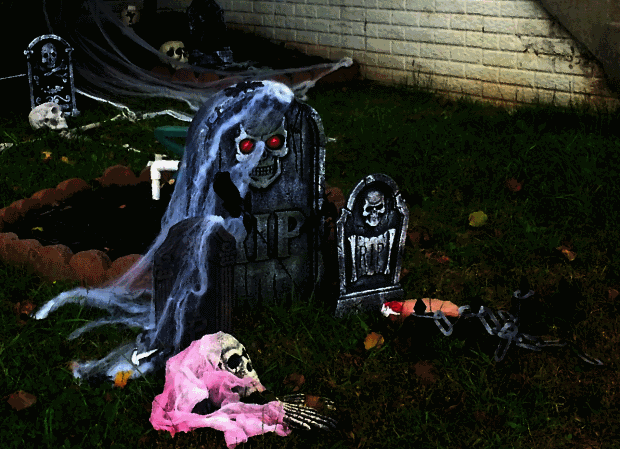 Everything seems calm. A couple of fake bats hang from the porch. We can see the light of lamps through the windows. Mr. Evans is waiting for us and for all the other children in the neighborhood for sure.

“It’s gonna be easy-peasy” says Jack, as he strides confidently towards the door.

Some kind of black ghost with a scythe springs out of the ground and stops at two feet from Jack. Or rather, two feet from where he stood before leaping at least three feet back, falling on his butt. A spooky laugh echoes loudly in the air.

A couple of seconds later, everyone bursts into laughter. Jack stands up. Then he laughs too. The door of the house opens and Mr. Evans appears. He’s visibly satisfied. From his black tunic appears a hand holding a tiny remote control.

“Come children. I have some candy for you! ” Evans declaims with a totally non-credible cavernous voice.

I have to hand it to them. They really dig Halloween around here. Big time.This Evans guy must have shelled out $100 at least to install the kid scare. I wonder how he spends the remaining 364 days of the year.

We move on to the next two houses. Everything runs smoothly. We hit the doorbell and in a few moments we are greeted by a grandma and a distinguished gentleman with a pipe. Everyone is ready to give large doses of chocolate and sweets. We put them in our little portable cauldrons.

Janette shouts from down the street to Jack and Tommy. She wants to make sure that Lindsay also gets some treats. 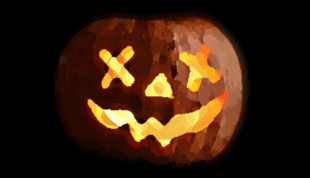 We look around, but we can’t see her. Tommy was distracted. He doesn’t know either.

“Lindsay is not here!” I shout to Janette and Mom.

Janette and mom run towards us. After a few seconds they are with us.

“She was with you! Where did you leave her?”

I remember seeing Lindsay when we left. I haven’t seen her after that. I took it for granted that the little one was with her mother.

How can a child disappear so easily? She can’t possibly be far.

Janette is worried. More than worried, in fact. We can see the agitation on her face. My mother tries to reassure her:

“She’s around here for sure.”

But those words do not seem to help much.

Janette pulls her cellphone out of her trouser pocket. Tries to unlock the screen. Wrong code. Tries once more, but she gets it wrong again. We are all silent. Even the little dinosaur finally realizes that something serious is occurring and shuts up too.

Jack shouts his sister’s name, but we hear no answer. 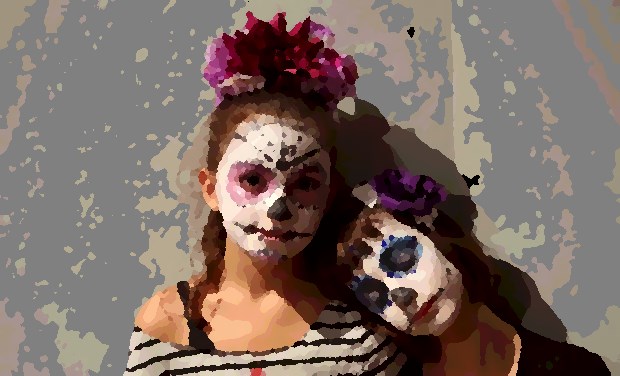 All of a sudden we hear a trill, like a cell phone ringing, coming from a dark corner between two houses. A strange long shadow projects from that area. The gait has something human to it, yet it is not recognizable as the shadow of a person.

After a few seconds, everything is clear. It’s Peter’s shadow. Lindsay is sitting on his shoulders, laughing.

No complaints here. Of so many evenings, this one is by far the best pick for a good scare.