Some scourges of society never seem to disintegrate unless the fight against it remains constant. But it can happen. It takes the youth to channel this positive energy and outlook for the future; it takes a village and it takes unwavering involvement from the international community. “We celebrate this ‘We Can Do It Spirit’,” said Lakshmi Puri, Assistant Secretary-General at the United Nations for Gender Equality and the Empowerment of Women (UN Women), during an event at the UN headquarters in New York on Friday, June 26.

The ceremony was an acknowledgement to the 10 winning university students from across the globe who had presented their ideas via The 2015 United Colors of Benetton UNHate/UNAI Diversity Contest, on how to create a better world. Thanks to the UNHate Foundation these will become realities as each project will be fully funded with a sum of €20,000 from the United Colors of Benetton Group. Seeking to contribute to the creation of a new culture against hate and to support new generations where youth are the main actors and beneficiaries of concrete projects and education activities are the main reasons Italian fashion company, Benetton Group S.p.A. launched an initiative entitled The UNHate Foundation in 2011. Benetton has now joined forces with United Nations Academic Impact (UNAI) to acquire the opinions from youths between the ages of 18 and 30 from across the globe, about how they would address intolerance and then spur creative ideas from them as to how they could establish hate-free communities.

After the initiation of the Diversity Contest more than 100 entries from youth organizations in 31 countries around the world were submitted. The wealth of innovative ideas and solutions for tackling everything issue – from homophobia to homelessness; race and religion; gender-based discrimination to exclusion of persons with disabilities; xenophobia to interethnic conflict, and others – flooded the competition pool. “This contest showcased the engagement of young people around the world and the innovation, energy and commitment they bring to personally crafted solutions that address some of the world’s most pressing issues,” said Ramu Damodaran, chief of UNAI.

Mariarosa Cutillo, manager of corporate social responsibility for the Benetton Group and President/CEO of the UNHate Foundation, who was present at the event, says empowering youth is the key to making lasting change. “We at the United Colors of Benetton UNHate Foundation believe that intolerance and discrimination not only undermines economic and social development but also has a devastating impact on young people. This is why we support youth as change agents in their communities and leaders in the dialogue on diversity and inclusion to make real progress in the fight against hate,” Cutillo added.

“Girls can touch the sky,” Puri said as she recalled the promulgation of the idea during her younger years that women could do anything. “But we ended up telling our daughters ‘This is not for you,' in certain cases.” Puri said she felt empathy and the unlearning of prejudice and discrimination from the event and gave thanks to the men who were also present. “We celebrate women’s will to change the world and we celebrate the He for Shes.”

One of the award recipients commented, “The Benetton UNHate grant will help me pursue my vision of a world in which all people are treated with respect and dignity.” 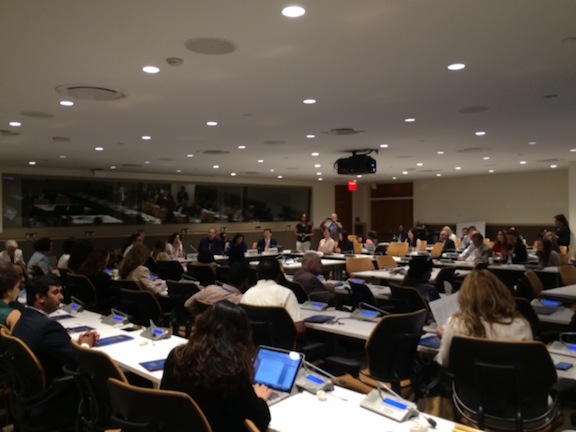 The students partecipating at the UN Headquarters ceremony

Canada: Landon Zeeman and Jennifer Farquharson from Royal Roads University. Project: Empowering Palestinians to tell their own stories. These students, inspired by the successful photo journal Humans of New York, will develop a similar website, People of Palestine, through which Palestinians can tell their stories about their experiences, history, culture and ideas.

Germany: Lara-Zuzan Golesorkhi from The New School. Project: Employment opportunities for Muslim women. Lara student will provide skills training for Muslim women in Germany, who often face discrimination in the employment sector, but also work with employers to increase their hiring and inclusion of Muslim women in the workplace.

India: Sanesh Varghese, Tiji Thomas, Angel George, M.S. Samuel, Pradeep Vazhatharamalayil, Shibu Itty Mathew of MACFAST University. Project:  Empowerment of indigenous women in India through education. This is a group of faculty members seeking to empower young indigenous women by preparing them for university programs in fields such as medicine, nursing and engineering.

Mexico: Rosa Maria Ramia de Garay from National Autonomous University of Mexico. Project: Promoting understanding of discrimination faced by women, members of the LGBT community and indigenous peoples. She will install multimedia booths in public places that will provide an immersive experience to show people what it feels like to face different forms of discrimination on a daily basis.

Mexico/United States: Atenea Rosado Viurques, Amanda Braga, Ana DinoRamos, Andrew Van Rompaey Peñagaricano, Axel BautistaPérez, Cristina GonzálezFitch, Kendra Strouf and Camila Ruiz Segovia from both the National Autonomous University of Mexico and Columbia University. Project: Immigrant women's stories. This transnational group of students will document the experiences of Mexican and Central American women who immigrate to the United States to increase understanding of the many barriers and challenges they face as well as their contributions to society.

Pakistan: Varsha Thebo, Agnes Scott College. Project: Increasing interfaith understanding. This Pakistani student seeks to promote harmony among Christians, Hindus and Muslims in Sindh Province in her native country by using texts from each religion to demonstrate that each faith stresses peace and harmony.

South Africa: Sebudisi Mafabatho of Northwest College. Project: Xenophobia.The project proposed by this South African student will shed light on the plight of migrants in South Africa through a series of debates and discussions with the purpose of creating awareness and improving the treatment of migrants throughout the world.