Some call it “his majesty”. Gioacchino Rossini called it "the Mozart of mushrooms", and the great French chef Brillat-Savarin renamed it the "diamond of the cuisine". We are in the presence of one of the most delicious, internationally-known, appreciated, but also very expensive food. From Piedmont to Umbria, Tuscany and Marche, Italy is a paradise for truffles lovers, white or black it is. 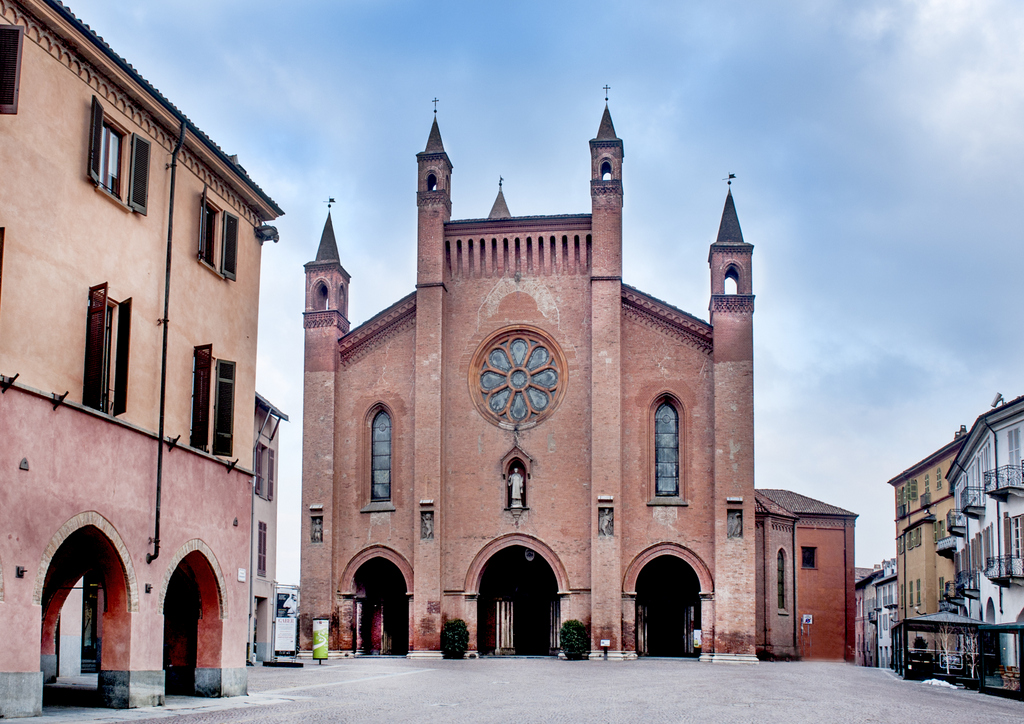 The queen of truffle is, with no doubt, Alba –an ancient medieval village nestled in the rolling hills of the Langhe Roero, which, in addition to superb, full-bodied red wines, has a quality of Tuber Magnum Pico of rare delicacy. It is not just the food that makes Alba a destination not to be missed: the city of a hundred towers is waiting to be discovered. Starting from the Piazza del Duomo, where there is the Town Hall (the assembly room contains a table of Macrinus d'Alba , great exponent of the Piedmont Renaissance), and the Cathedral of San Lorenzo, an imposing building that may have already existed, in Romanesque style, in the twelfth century though was completely rebuilt in 1486.

All the President's truffles

A few steps from the Cathedral is the Church of San Domenico, in early Gothic style, built in the late twelfth century. Close to the Church is the oldest shop truffles in Alba, founded by Giacomo Morra in 1930. Ask to visit the caveau where are proudly displayed the best and the biggest white truffles in the world: they get delivered in 48 countries around the world from Dubai to the U.S. and China. 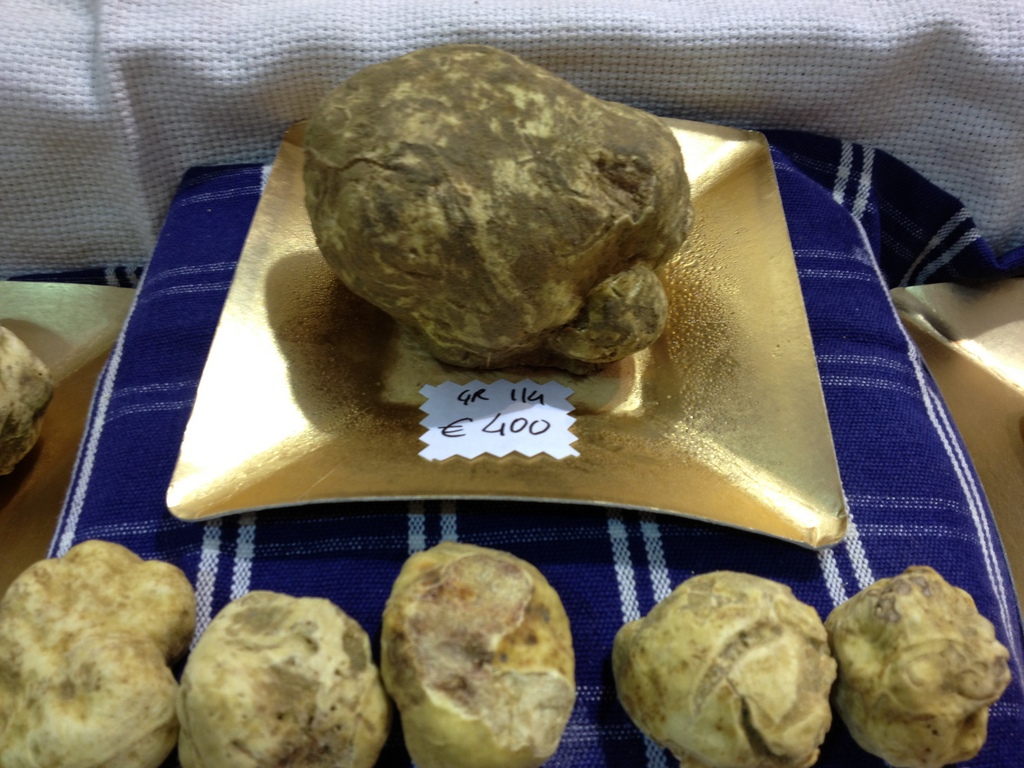 Giacomo Morra is a milestone in the history of truffle. Hotelier and restaurateur of Alba, who first figured the potential of making the truffle an object of worship at an international level by giving it a name, Tartufo Bianco d' Alba, and linking it to a food and wine event that would become a tourist attraction, the Truffle Fair of Alba. It was Morra who, in 1949, had the brilliant idea of giving the best specimen collected that year as a present to actress Rita Hayworth. Since then, almost every year, precious truffles are sent to V.I.P. Around the world. Among others, U.S. Presidents Harry Truman , Dwight D. Eisenhower and Ronald Reagan, British Prime Minister, Winston Churchill, Joe DiMaggio and Marilyn Monroe, Alfred Hitchcock, and Pope John Paul II.

Each year, in November, the Grinzane Cavour Castle in Alba hosts the World Auction of White Truffle of Alba. In 2013, for the 14th edition, 11 magnificent specimens of tuber magnatum pico were sent at auction, for a total of EUR 274,200 in total. The final lot, fought between live audiences at Grinzane and in Hong Kong, was formed by a pair of truffles, in a unique combination, for a weight of 950 grams. To win it, a famous Chinese writer for the sum of 90,000 Euros, a price per gram three times higher than that of gold. One of the earlier batches, an exemplary 305 grams, was donated to New York mayor-elect, Italian-American Bill de Blasio .

A detour following the taste of Barolo 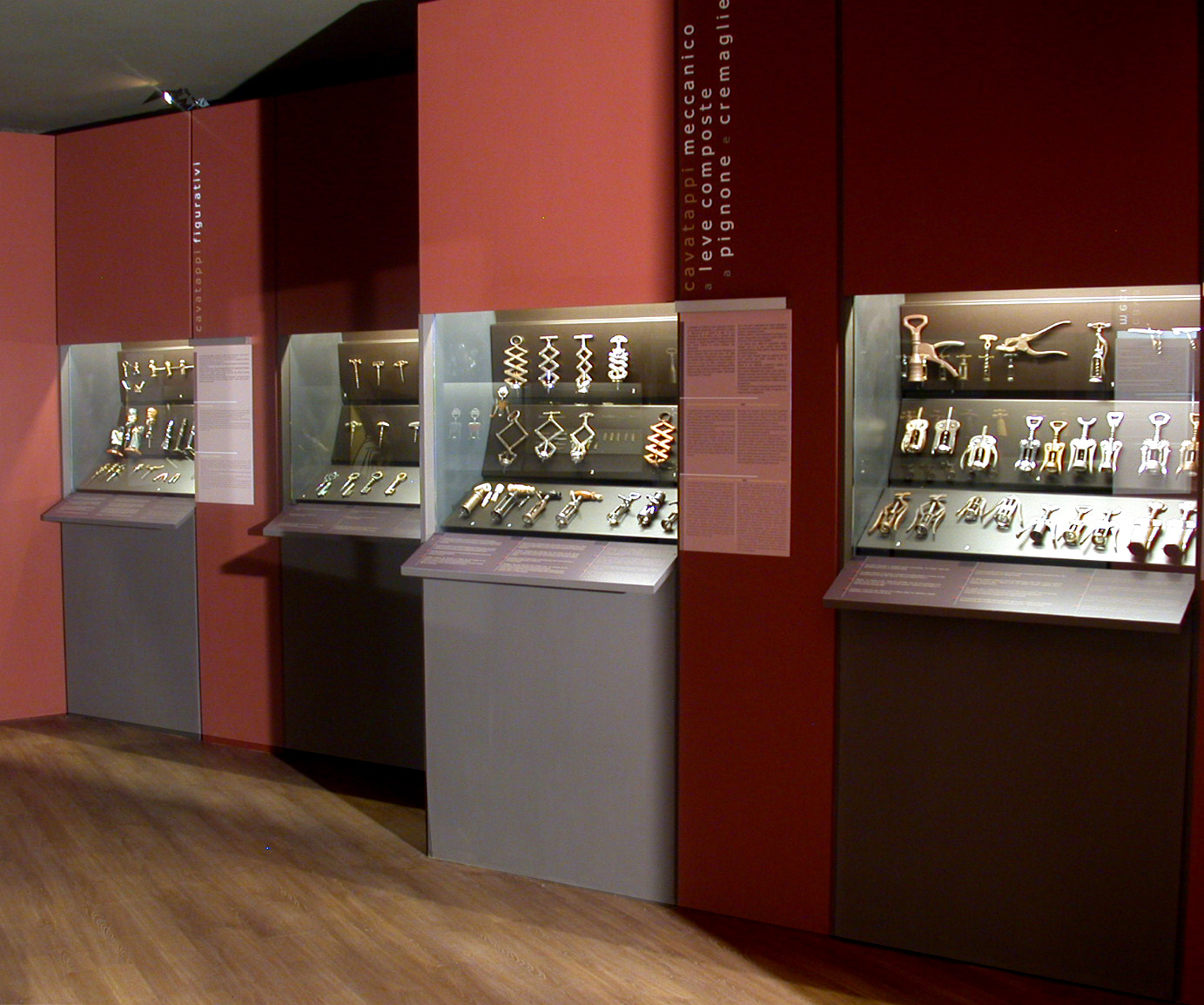 A handful of miles from here – along a road that winds through lush green hills dotted with steeples and castles – is Barolo, known not only for one of the finest wines in the world, but also for the Faletti Castle which houses the Wine Museum. The visit is a journey to discover the wine, a multisensory experience of great beauty that culminates with a tasting of the great wines of Barolo. Next to the castle, don't miss the Museum of the corkscrew, with its 500 pieces of antique corkscrews from around the world. Here, among others, you can see some items made with fine materials by the best craftsmen and goldsmiths for aristocrats and religious who used to have the coat of arms or the initials of their name put on the corkscrew.

Land of strong culinary traditions and landscapes of breathtaking beauty, to be enjoyed in all seasons, Tuscany is also famous for its truffles. The best is definitely the white truffle of San Miniato, which has little to envy to that of Alba. The black one is also well represented, especially in the area of the Apennines. 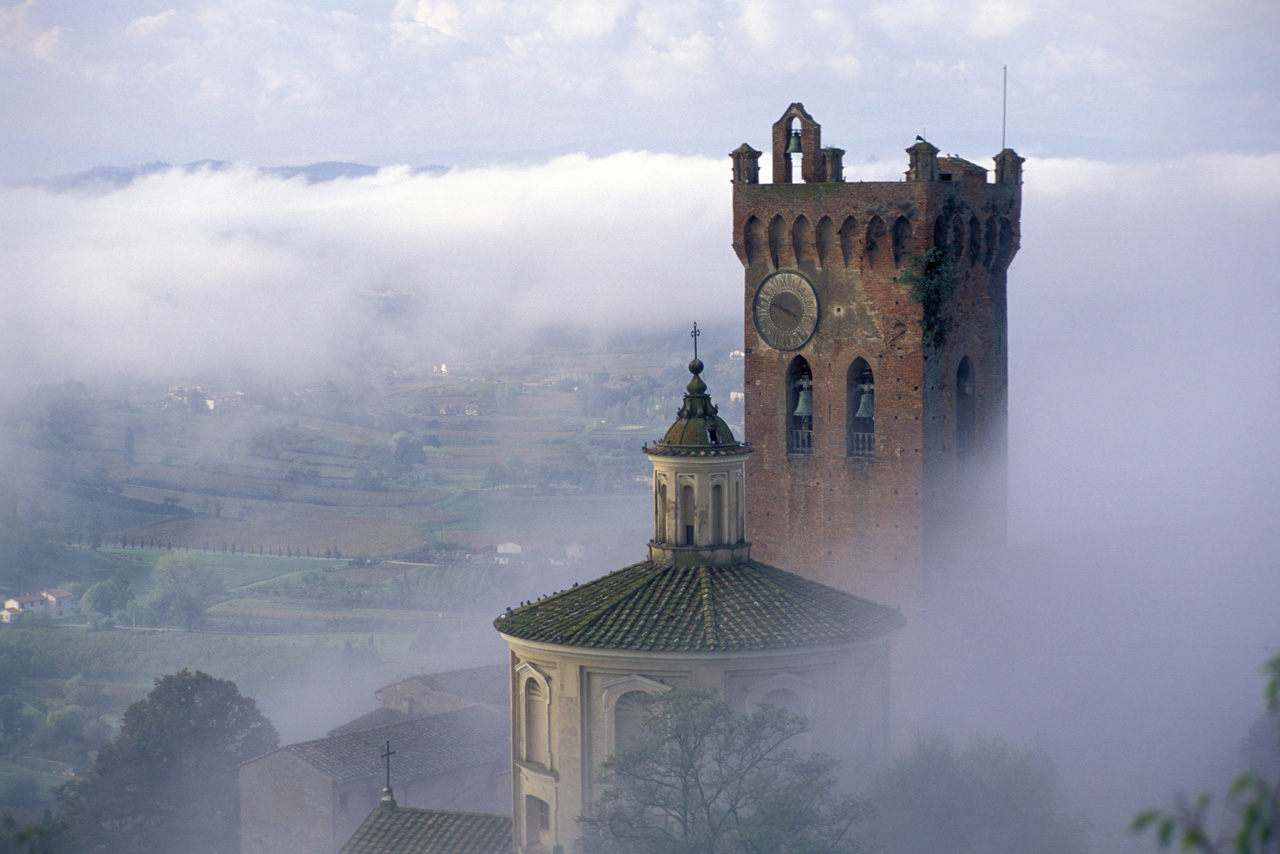 Delightful village of Etruscan-Roman period, perched on a hill along the Arno River, halfway between Florence and Pisa, San Miniato was a destination privileged by emperors such as Frederick II of Swabia and by popes such as Gregory V and Eugene IV. The town is filled with charming palaces and old churches, such as the Thirteenth century Cathedral overlooking Cathedral Square and the Church of Santo Stefano and San Michele, built in the twelfth century on the Mangiatore family's private chapel; or the Castle, at whose side stands the tower, a symbol of the city. The village was the birthplace of one who will go down in history as the Witch of San Miniato, whose story is exemplary of the perception of witchcraft in the Sixteenth Century.

From Tuscany to the Marche, a region still unknown by foreign tourism, but which holds great treasures of landscapes, arts, history, and gastronomy that are worth discovering. Topping the list is Acqualagna, located along the ancient Via Flaminia, passed the Furlo Natural Reserve, where you can admire the impressive cliffs, the two Roman galleries through which ran the ancient Via Flaminia, and the impressive cave of wheat. Located in the hinterland of the province of Pesaro and Urbino, Acqualagna is considered by many as the capital of the truffle because here are held three events dedicated to His Majesty: the main, between the last weekend of October and the first week of November, is the White Truffle National Fair, while in February there is the black Truffle Fair and in August is the Regional Fair of black summer truffle. 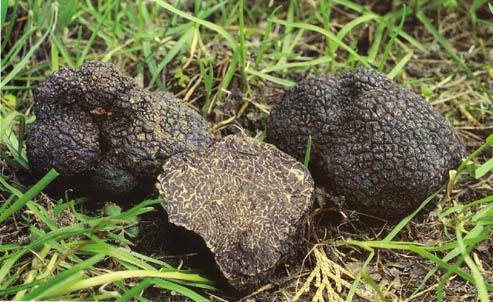 As a worthy counterpart to the white truffle of Alba, here is the Tuber melanosporum Vittadini, the finest black truffle on the market, which you can find in Norcia, in the region of Umbria. Protagonist of many recipes of international cuisine, and exported all over the world, this truffle, unlike the white one, finds its highest exaltation when cooked. Don't miss the appointment with Nero Norcia, the famous truffle festival (the last weekend of February and the first of March) entirely dedicated to the black king, where you can find the black summer truffle (Tuber aestivum ) – better known by the name of "scorzone" for its rough bark – the white truffle or "marzuolo" (Tuber albidum), the black winter truffle from Norcia (Tuber brumale ), and the hamate truffle (Tuber uncinatum Chatin) . 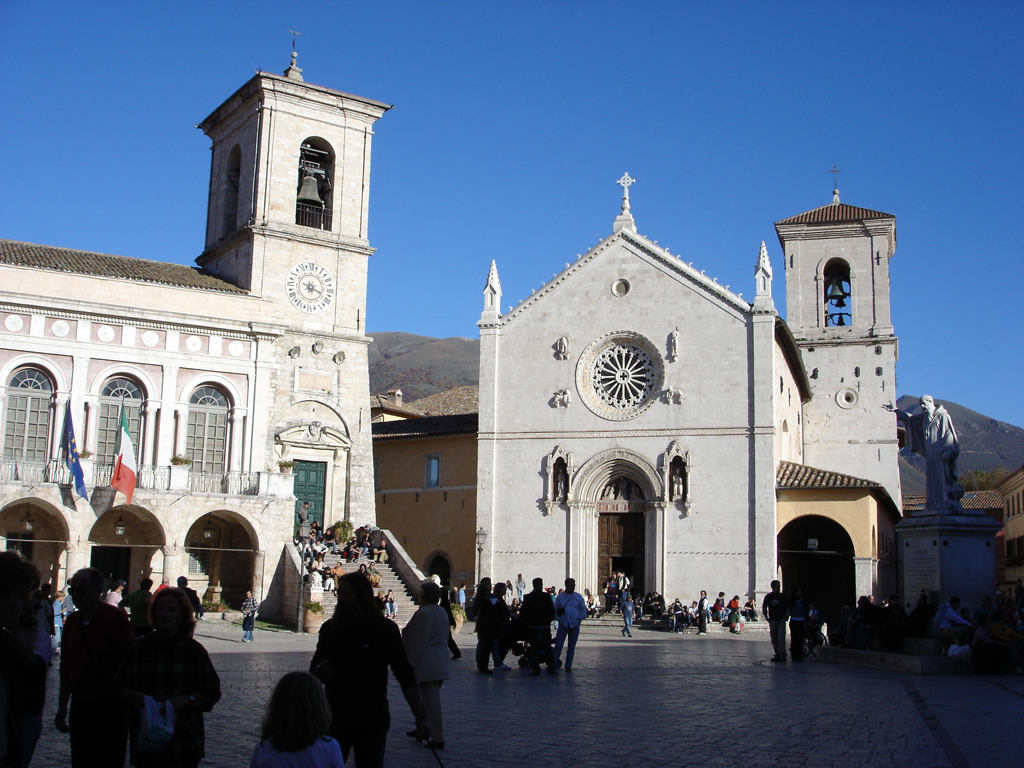 Founded by the ancient people of the Sabines, close to the Sibillini Mountains, on the Plains of St. Scolastica, surrounded by medieval walls that have remained intact over time, Norcia, as all the Valnerina Valley, is a destination far away from clichés, that needs to be discovered and experienced slowly. Here, nature, mysticism, gastronomy, art blend in infinite silence. Hometown to St. Benedict, Norcia is counted among the most beautiful villages in Italy and has a number of old historic buildings of rare beauty, starting with the Castellina, a monumental fortress built in 1554 and designed by Vignola, now the home to the Civic and Diocesan Museum. Definitely worth a visit the Town Hall, with its double loggia, and the Basilica of San Benedetto, built on Roman ruins of the first century, with a Gothic facade of the fourteenth century and in whose crypt are the remains of the ancient building known as the porch of the Measures, built in the mid-sixteenth century as a covered market for cereals. In the Monastery of St. Benedict, where mostly young American Benedictine monks live, you can buy the craft-beer Nursia, blonde or extra, both very good varieties. 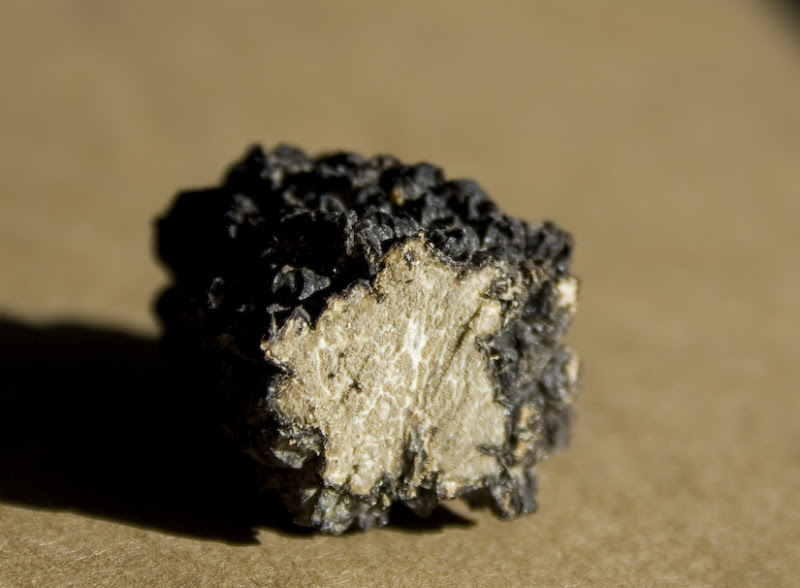 Moncalvo (AT), the last two Sundays in October;

International Fair of the White Truffle of Alba

Alba (CN) , from mid-October to mid-November;

San Miniato (PI), all except the first weekend of November;

Palazzo Finati, old palace of the Nineteenth Century which houses the works of the best painters in the area. From 150 € per night, breakfast included;

Casale di San Miniato, two buildings dating back to the XVIII century , surrounded by olive groves and vineyards. The restaurant offers a truffle tasting menu at 45 €;

Antico Furlo, a Nineteenth century building built along the Via Flaminia at the gates of the Furlo Gorge. Worth a visit the cave of delights, where you can sample fine wines and local delicacies. Rooms from 70 € per night. 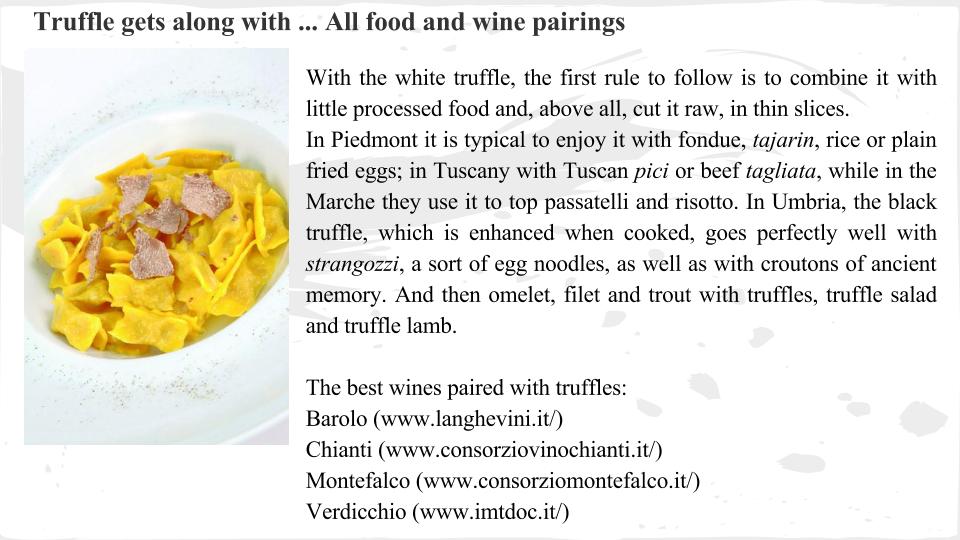 In Calabria, the Rebirth of Wine Comes from Women